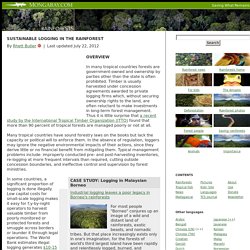 Timber is usually harvested under concession agreements awarded to private logging firms which, without securing ownership rights to the land, are often reluctant to make investments in long-term forest management. Thus it is little surprise that a recent study by the International Tropical Timber Organization (ITTO) found that more than 90 percent of tropical forests are managed poorly or not at all. Many tropical countries have sound forestry laws on the books but lack the capacity or political will to enforce them. In the absence of regulation, loggers may ignore the negative environmental impacts of their actions, since they derive little or no financial benefit from mitigating them. In some countries, a significant proportion of logging is done illegally. Beyond deforestation, one problem with illegal logging is it costs governments money. Review questions: Explicit cookie consent. EMPTY fields, as far as the eye can see, line the highway for most of the 300km (186 miles) from Belem, eastern Amazonia's main city, to the timber-cutting town of Paragominas. 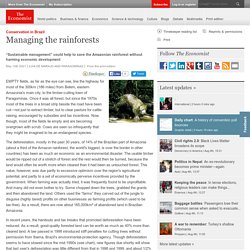 Once it was all forest, but since the 1970s most of the trees in a broad strip beside the road have been cut—not just to extract timber, but to clear pasture for cattle-raising, encouraged by subsidies and tax incentives. Now, though, most of the fields lie empty and are becoming overgrown with scrub. Cows are seen so infrequently that they might be imagined to be an endangered species. Managing the Amazon forests. We want the Amazon rainforest to be worth more standing than cut down. 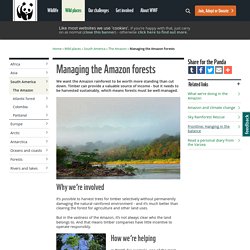 Timber can provide a valuable source of income - but it needs to be harvested sustainably, which means forests must be well-managed. Why we’re involved It’s possible to harvest trees for timber selectively without permanently damaging the natural rainforest environment - and it’s much better than clearing the forest for agriculture and other land uses. Tropical Rainforest Sustainable Development: Papua New Guinea. 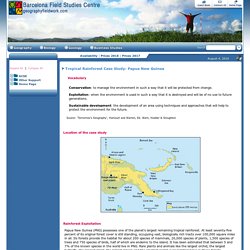 At least seventy-five percent of its original forest cover is still standing, occupying vast, biologically rich tracts over 100,000 square miles in all. Its forests provide the habitat for about 200 species of mammals, 20,000 species of plants, 1,500 species of trees and 750 species of birds, half of which are endemic to the island. AMAZON RAINFOREST DEFORESTATION FACTS. Deforestation impacts spread of infectious diseases in Peruvian Amazon - Fogarty International Center @ NIH. Photo: WHO/TDR Mark Edwards Deforestation can encourage malaria outbreaks. 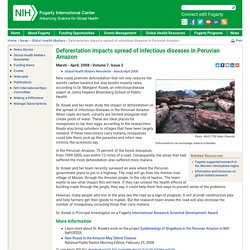 New roads promote deforestation that not only reduces the world's carbon balance but also boosts malaria rates, according to Dr. Margaret Kosek, an infectious-disease expert at Johns Hopkins Bloomberg School of Public Health. Dr. Deforestation in the tropics affects climate around the world, study finds - Carbon Brief. “The effects of tropical deforestation on climate go well beyond carbon,” says Professor Deborah Lawrence, “[it] causes warming locally, regionally, and globally, and it changes rainfall by altering the movement of heat and water.” 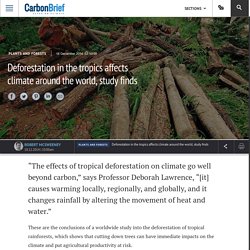 These are the conclusions of a worldwide study into the deforestation of tropical rainforests, which shows that cutting down trees can have immediate impacts on the climate and put agricultural productivity at risk. Rainforests are more than just a carbon store Deforestation and land use change account for approximately 11 per cent of global carbon dioxide emissions. But the new research finds that cutting down trees doesn’t only affect the carbon they lock up. The Amazon Rainforest - Case Study on Flipboard. Disaster looms if loss of Amazon rainforest continues - Climate News NetworkClimate News Network. Brazilian climate expert proposes five-point “battle plan” in a war against the Amazon deforestation that is having increasingly dire impacts on the regional and global climate. 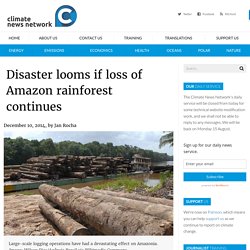 SÃO PAULO, 12 December, 2014 − The relentless destruction of Brazil’s Amazon rainforest will endanger the global climate unless it can be stopped and restored, says a new report by a leading climate scientist. In an eloquent, hard-hitting scientific assessment report entitled The Future Climate of Amazonia, Dr Antonio Donato Nobre, a researcher at Brazil’s National Institute for Space Research (INPE), traces the climatic potential of the world’s greatest remaining rainforest. He looks at its critical functions for human society, its destruction through deforestation and fire, and he discusses what needs to be done “to stop the runaway train that the climate has become since human occupation in forest areas”.

Forest degradation “We must regenerate, as widely as possible, all that has been changed and destroyed” Amazon clearance for agriculture is 'economic own goal' for Brazil. Brazil is at risk of scoring an economic own goal if it continues clearing Amazon forest for herding and soya production, according to a new study that has potential implications for global food security. 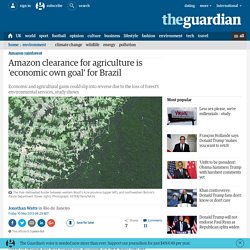 How cattle ranches are chewing up the Amazon rainforest. For about three years now, we've been working on curbing the impacts of the soya industry on the Amazon rainforest in Brazil which, before the current moratorium was put into place, was replacing the forest with plantations on a massive scale. 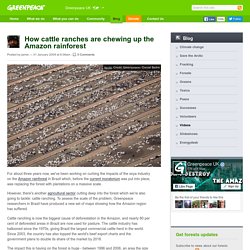 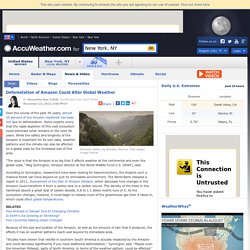 See larger image below. Project Amazonia: Threats - Deforestation. Project Amazonia: Threats - Deforestation Deforestation is a problem that affects the entire Amazon Rainforest ecosystem as a whole. Models of the future impact of deforestation based on current trends1 predict dire consequences for the Amazon. To examine the effects of deforestation more closely, one 1990-1993 study replaced tropical forest and savannah with pasture in South America, north of 30S2. Local and Global Effects of Deforestation in the Amazon Rain Forest - National Geographic Society. 1. Activate students’ prior knowledge about the local and global environmental effects of deforestation. Introduce the activity with a discussion about students’ local area and the organisms that live there. Ask students to brainstorm what roles trees might play in the forest. Brazil’s Economy Suffers Consequences of Amazon Deforestation.

(3BL Media/Just Means) - Between 2014 and 2015, São Paulo, Brazil’s biggest city and the country’s financial center, underwent the worst drought in 80 years. The Cantareira reservoirs, the main source of water supply to São Paulo,​ ​went down to a record low. Although by the end of the summer the region eventually received the usual amount of rainfall in concentrated amounts, the problem is far from being solved. ​

The combination​ of environmental recklessness and lack of investments has ​brewed up an ecological storm that requires strategic and focused political action. Amazon deforestation leads to economic boom and bust. By Catherine Brahic Amazon villages that cut down their forest may make a quick buck, but ultimately end up just as poor and low down on the social ladder as when they started out, say researchers. A study of nearly 300 communities in the Brazilian Amazon shows that deforestation leads to social and economic “boom and bust”.

Keeping an eye out for his herd, he surveys his 274-hectare ranch located in the eastern Amazonian state of Pará. Amazon rainforests pay the price as demand for beef soars. Four-year old Daniel Santos da Silva and his older brother Diego Mota dos Santos, 10, heard their first gunshots in April. Amazon Deforestation Takes a Turn for the Worse.

Amazon deforestation report is major setback for Brazil ahead of climate talks. Deforestation of the Amazon rainforest. Amazon Destruction.