10 key moments of the UK winter storms. The UK has been battered by strong winds and lashed by heavy rain in a series of ferocious storms that have barrelled across the Atlantic. 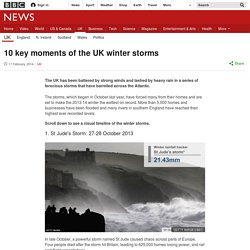 The storms, which began in October last year, have forced many from their homes and are set to make the 2013-14 winter the wettest on record. More than 5,000 homes and businesses have been flooded and many rivers in southern England have reached their highest ever recorded levels. Scroll down to see a visual timeline of the winter storms. 1. St Jude's Storm: 27-28 October 2013. Somerset floods – News, Research and Analysis – The Conversation – page 1. The record rainfall and persistent storms of winter 2013-14 caused serious flooding throughout the southwest of England, with breached defences, loss and damage to agricultural land, homes and businesses… According to Ofcom, 80% of adults in the UK had access to the internet in 2013 and each spent about 35 hours online each month. 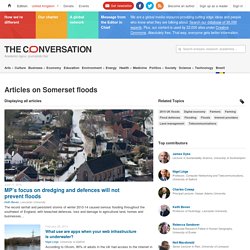 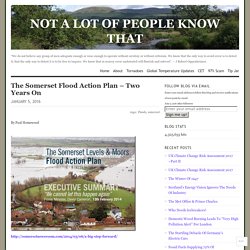 This is the latest update from the Environment Agency: Somerset floods: this is a man-made disaster. Of course it’s not just my family that has been affected. 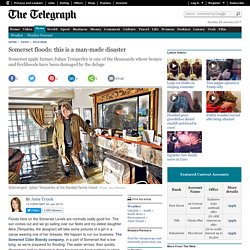 About 20,000 acres of farmland in Somerset have been underwater for a month now. I’m sure you’ve seen the pictures. The ancient village of Muchelney is totally cut off; you can only get there by boat, and Thorney, where my father lives, has been evacuated. The reality is horrific: tractors and cars have been submerged; animals drowned, and the locals are in despair.

An oak furniture maker near Bridgwater has lost more than £1million of furniture, while the potter John Leach, 75, whose grandfather Bernard Leach established Muchelney Pottery, a family dynasty, has had to lay off his five employees; unless they were prepared to swim, there was no way they could get to their workshops. Man-made climate change caused Somerset floods say scientists. Somerset floods crisis: How the story unfolded. Large parts of the Somerset Levels spent much of the winter of 2013-14 under water. 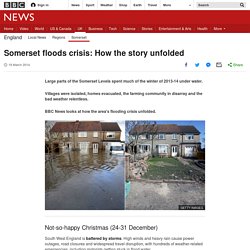