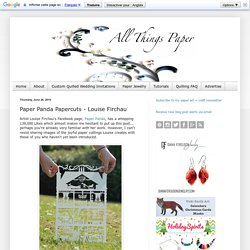 However, I can't resist sharing images of the joyful paper cuttings Louise creates with those of you who haven't yet been introduced. In a recent post on her blog, Louise, who is an avid reader, mentioned that the designs are often inspired by childhood books such as Alice in Wonderland and Brothers Grimm Fairy Tales. In fact she keeps a stack of books in her studio to refer to, but many other things prompt ideas as well... song lyrics, something she's read, or a printed design.

Louise's life sounds as if it would fit right into one of her beloved storybooks, as she lives and works in England’s picturesque Cotswolds. Louise admits to many long hours hand drawing or digitally creating designs which she then carefully cuts with a sharp blade. But back to the Paper Panda Facebook page... Mr Riu creates amazingly detailed paper cuts - Designer Daily: graphic and web design blog. Riu, who goes by the artist name of Mr. 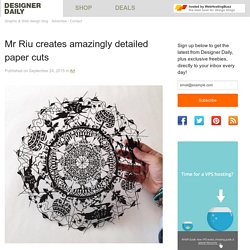 Riu, is a young Japanese artist who took upon the delicate art of paper cutting. He did a wonderful job at keeping a traditional touch, while mixing ancient and modern symbols in his intricate artworks. Some of his pieces are inspired by the art of mandala, while other are closer to nature and less geometric in shapes. All are stunning by their beauty and strangely relaxing to look at. Japanese Artist Hand-Cuts Insanely Intricate Paper Art That Looks Like Pencil Drawings. Japanese artist Akira Nagaya creates insanely intricate paper cuttings called kirie that look like delicate pencil drawings or wire sculptures. 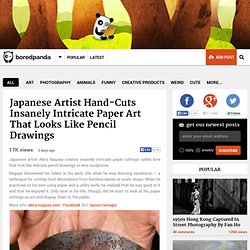 Nagaya discovered his talent in his early 20s when he was learning sasabaran – a technique for cutting food decorations from bamboo leaves at sushi shops. When he practiced on his own using paper and a utility knife, he realized that he was good at it and that he enjoyed it. Only later in his life, though, did he start to look at his paper cuttings as art and display them to the public. More info: akira-nagaya.com | Facebook (h/t: spoon-tamago) Japanese Artist Delivers Beautiful Paper Works Of Art. Akira Nagaya, a self-taught Japenese Kirie (literally "cut paper" in Japanese) artist has spent the past 30 years of his life learning one of the most ancient and beautiful arts in the world. 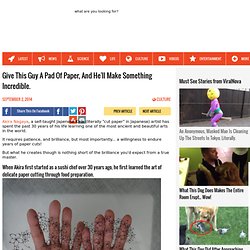 It requires patience, and brilliance, but most importantly... a willingness to endure years of paper cuts! But what he creates though is nothing short of the brilliance you'd expect from a true master. When Akira first started as a sushi chef over 30 years ago, he first learned the art of delicate paper cutting through food preparation. He would continue the art of using paper and a utility knife as he enjoyed the work. Eventually increasing his skill to sheer mastery level.

Later, this 47 year old would eventually open his own restaurant and even decorate the walls with his creations. It didn't take long for others in the community to discover his work and spread it to the world. (via Spoon & Tamago) All About Paper Cutting. Thomas Witte of Ditmas Park Turns the Everyday Into Works of Paper Cut Art. Thomas Witte walks around the neighborhood with his daughter (and now with his brand new son as well) and sees details that most people overlook, and he thinks about what his next series of paper cuts could be. 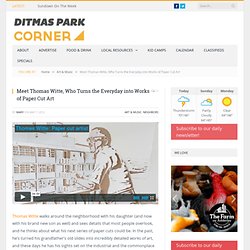 In the past, he’s turned his grandfather’s old slides into incredibly detailed works of art, and these days he has his sights set on the industrial and the commonplace of streets like Coney Island and Flatbush Avenues. “Where I live and where I work is a huge influence on me, because it’s where I’m spending most of my time,” Thomas explained. “And in this neighborhood, it’s the stuff you see, the stuff you walk by, the stuff you don’t pay attention to. There’s something that happens that you wouldn’t normally expect when you’re working from things that nobody’s focusing on, that they’re only looking at for a split second as they pass by.” “It’s the same sort of feeling that you get from a garage or a nail salon that you walk by every day,” he explained. On Paper / Grand Central at 100: Thomas Witte "Cutting Shadows" Kris Trappeniers' Photostream. Creative Workforce Fellowship Artist Profile: Laura Cooperman.