Hurricane Katrina. Hurricane Katrina: 10 Years On. The Health Effects of Hurricane Katrina. Author: Brianna Frank Storm track map from NASA, showing the increase in surface water caused by Hurricane Katrina (left) and Rita (right). ( This case study is part of a collection of pages developed by students in the 2012 introductory-level Geology and Human Health course in the Department of Earth Sciences, Montana State University. 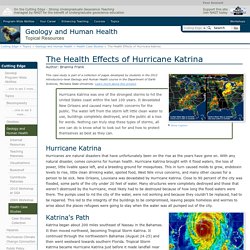 Learn more about this project. This Graphic Shows How Hurricane Katrina Changed New Orleans. How one of the nation's deadliest storms left an American city a different place Correction appended. 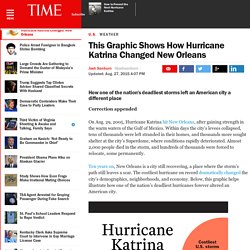 Hurricane Katrina's legacy 10 years on - a whiter, more gentrified New Orleans - Americas - World - The Independent. Apart from a hurried, anguished trip to collect her belongings a few months after Katrina devastated their city, she has never been back. 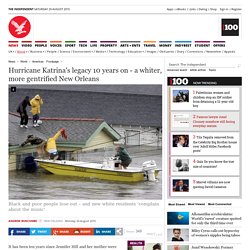 But next week – days after the 10th anniversary of the storm – she is to pay a visit with her fiancee, a chance to show him the sights of the place where she grew up. “When we first got to West Virginia we were in shock. There was a time when we wanted to let things sink in, while we were waiting for things to become normal,” Ms Hill, a social worker with a masters degree, said from the city of Huntington.

Jennifer Hill will visit for the first time in ten years “We assumed we would be back in a few months. Ms Hill’s story has been repeated thousands of times, across the length and breadth of America. Hurricane Katrina: UK satellite revisits New Orleans 10 years on - BBC News. When Hurricane Katrina made landfall in the morning hours of 29 August, 2005, it wrought devastation on a huge scale. 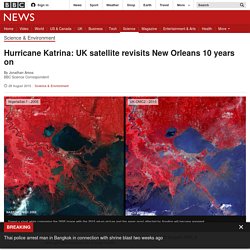 To get an overview of what they faced, disaster response coordinators needed satellite imagery, and the first picture to come in was acquired by a British-built, Nigerian-owned platform. NigeriaSat-1 captured a wide-area image showing where the New Orleans levee system had been overtopped or breached. Katrina anniversary: Inside the Superdome during Katrina - BBC News.

Dave Cohen was one of the few reporters to stay in New Orleans as Katrina bore down on the city, and continued broadcasting as the floodwaters rose. 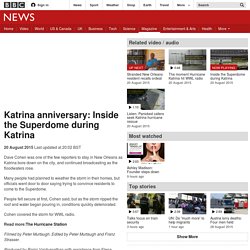 Many people had planned to weather the storm in their homes, but officials went door to door saying trying to convince residents to come to the Superdome. People felt secure at first, Cohen said, but as the storm ripped the roof and water began pouring in, conditions quickly deteriorated. Cohen covered the storm for WWL radio.

Read more:The Hurricane Station Filmed by Peter Murtaugh. Produced by Rajini Vaidyanathan with assistance from Elena Boffetta. Audio courtesy WWL AM-870 / FM-105.3, New Orleans. HURRICANE KATRINA. Hurricane Katrina began as a very low pressure weather system, which strengthened to become a tropical storm and eventually a hurricane as it moved west and neared the Florida coast on the evening of 25 August. 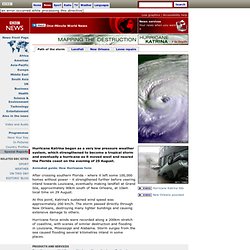 Animated guide: How Hurricanes form After crossing southern Florida - where it left some 100,000 homes without power - it strengthened further before veering inland towards Louisiana, eventually making landfall at Grand Isle, approximately 90km south of New Orleans, at 10am local time on 29 August. At this point, Katrina's sustained wind speed was approximately 200 km/h. The storm passed directly through New Orleans, destroying many lighter buildings and causing extensive damage to others. Hurricane force winds were recorded along a 200km stretch of coastline, with scenes of similar destruction and flooding in Louisiana, Mississippi and Alabama. Hurricane Katrina: New Orleans 10 years later. Hurricane Katrina, 10 years later: The myths that persist, debunked. 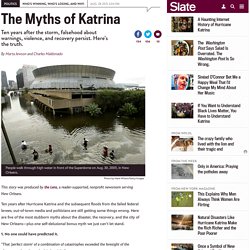 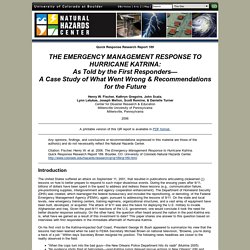 Fischer, Kathryn Gregoire, John Scala, Lynn Letukas, Joseph Mellon, Scott Romine, & Danielle Turner Center for Disaster Research & Education Millersville University of Pennsylvania Millersville, Pennsylvania A printable version of this QR report is available in PDF format. Any opinions, findings, and conclusions or recommendations expressed in this material are those of the author(s) and do not necessarily reflect the Natural Hazards Center. Citation: Fischer, Henry W. et al. 2006. Introduction The United States suffered an attack on September 11, 2001, that resulted in publications articulating (re)learned (1) lessons on how to better prepare to respond to such major disastrous events. 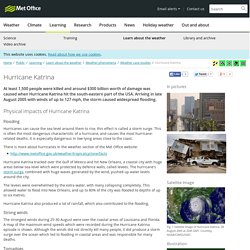 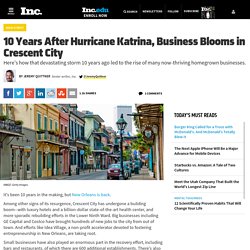 Among other signs of its resurgence, Crescent City has undergone a building boom--with luxury hotels and a billion-dollar state-of-the-art health center, and more sporadic rebuilding efforts in the Lower Ninth Ward. Big businesses including GE Capital and Costco have brought hundreds of new jobs to the city from out of town. And efforts like Idea Village, a non-profit accelerator devoted to fostering entrepreneurship in New Orleans, are taking root. Small businesses have also played an enormous part in the recovery effort, including bars and restaurants, of which there are 600 additional establishments.

There's also a newly burgeoning tech and software industry, education companies, and alternative energy firms. Hurricane Katrina: Costliest natural disaster in US history in numbers. In addition to the human cost of 1,836 lives lost and over one million people displaced in the Gulf Coast region, Hurricane Katrina had staggering impact on the local economy and was the costliest natural disaster in United States history. All in all, the total damage from the calamity was estimated at $150 billion by Professors Mark Burton and Michael J. Hicks. Damage to homes alone accounts for about $75 billion of that. WHATCH RT America's special coverage at 4 PM EST/ 8 PM GMT Hurricane Katrina, which struck the Gulf Coast in 2005, was responsible for at least $108 billion in property damage, becoming by far the costliest hurricane in United States history.

READ MORE: $60 billion in Superstorm Sandy devastation, one of worst US clean-up bills The collection, hauling and disposal of debris in Louisiana and Mississippi cost taxpayers over $2.5 billion. More than 70 countries pitched in humanitarian aid, with Kuwait making the largest single pledge of a whopping $500 million. 7. Disasters - Geography for 2015. How New Orleans recovered from Hurricane Katrina on 10th anniversary. Nearly 2,000 people were killed when Hurricane Katrina hit the city, destroying homes and the city's infrastructureNow the streets and main sites have been repaired after the damage, restoring the city to its former gloryThe storm was America's most expensive natural disaster, with the bill to repair the city costing $150billion By Tom Wyke for MailOnline Published: 11:45 GMT, 28 August 2015 | Updated: 23:36 GMT, 28 August 2015 Ten years ago, hundreds of people queued up outside the Ernest N.

Morial Convention Center in New Orleans hoping to get a lift out of the city. Hurricane Katrina anniversary: New Orleans ten years after storm, in pictures. Powerful Photos of New Orleans, 10 Years After Hurricane Katrina. Regular readers are likely familiar with the work of photographer Seph Lawless, whose hauntingly gorgeous images of abandoned malls and amusement parks have been regularly featured on the site. Hurricane Katrina: after the flood. Through the broken windows, the pulse of helicopter rotors and boat propellers set the summer morning air throbbing with the promise of rescue. Floodwaters unleashed by hurricane Katrina had marooned hundreds of people at Memorial hospital, where they had now spent four days. Doctors and nurses milled in the foul-smelling second-floor lobby.

Since the storm, they had barely slept, surviving on catnaps and bottled water. Before them lay a dozen or so mostly elderly patients on soiled, sweat-soaked stretchers. Now staff and volunteers hunched over the infirm, dispensing sips of water and fanning them with bits of cardboard. The languishing patients were receiving little medical care, and their skin felt hot to the touch. For certain New Orleanians, Memorial Medical Centre had always been the place to ride out hurricanes. As Katrina approached, there were 183 patients at Memorial and 55 at LifeCare. The hospital was stifling, its walls sweating. Hurricane Katrina. These stunning NASA images show the effect of Hurricane Katrina 10 years later. Hurricane Katrina: scenes of destruction 10 years on – in pictures.

Mapping the Recovery of New Orleans - Interactive Feature. Beyond Katrina: 7 Portraits of Grit and Determination. NEW ORLEANS, Louisiana—People who live in New Orleans like to say that the city's fragility is what gives it its soul. Half of the city lies below sea level, and it perches precariously near an eroding coastline that loses a football field's worth of land every hour to the Gulf of Mexico.

For nearly 300 years it has survived siege, epidemic, hurricane, and flood, and it will no doubt suffer more as seas rise and land disappears. Yet for those who live here, to live anywhere else is unthinkable.