Extreme Weather in the UK

Britain's Most Extreme Weather - Clips & Extras - S1-Ep1: Winter Storms - All 4. Climate change means more "extreme" weather than Storm Desmond is on the way. Donald Trump proclaims in his inaugural address that his policy will be “America first” on trade, jobs and taxes. 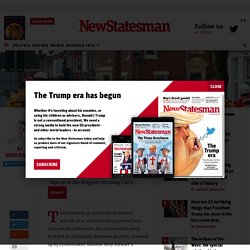 He repeats this as though for slow learners. Brexiteers nevertheless believe that we Britons will get a special trade deal from him, saving us from negotiations with those pesky Europeans. All US presidents in my lifetime have pursued “America first” policies in their dealings with Britain. Think of the harsh terms exacted for clearing wartime debts to America; the refusal to support the seizure of the Suez Canal in 1956; and Ronald Reagan’s attempts to force Margaret Thatcher, his supposed soulmate, to compromise with the Argentine junta that invaded the Falklands.

Those who imagine that Trump will be different regardless of what he says are fools. Weather could get worse over next 20 years. Flooding in winter to get worse, scientists warn. “As the atmosphere warms up they will carry more moisture, meaning they will deliver greater rainfall, so flood events will be larger. 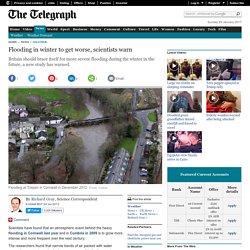 “As their frequency is also going to increase, this would suggest there is going to be an increase in the number of floods.” Dr Lavers and his colleagues warn that authorities such as the Environment Agency, which has responsibility for flooding, and the emergency services will have to prepare for the increase in floods. In November 2009, heavy rainfall from an atmospheric river that formed in a storm from the North Atlantic sparked severe flooding in Cockermouth, Cumbria, that swept away bridges and caused more than £100 million of damage in the area. Flood damage in Cornwall in December 2012, which was also caused by atmospheric river, left more than £3 million of damage.

Subscribe to read. UK weather: Why the recent devastating floods will become the new normal. What’s up with our weather? 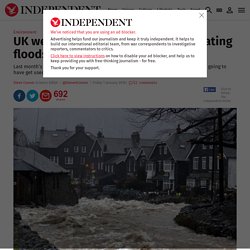 It has been the wettest December since records began for Scotland and Wales, the fourth-wettest for Northern Ireland and the second-wettest overall for the UK. In the past four weeks there has been an almost complete lack of frost, with the UK average temperature during December hitting a record-breaking 8C, which according to the Met Office is about 4.1C above the long-term average – beating the previous record of 6.9C set in 1934. This 4.1C temperature anomaly was higher than for any calendar month since 1910, which means that temperatures in the last month of 2015 – now the officially the warmest year globally – were closer to what we usually expect for April or May.

But it was the extreme rainfall over Wales, Northern Ireland, North-west England and Scotland that really brought things home. Is Britain experiencing extreme weather? Yes. Extremely mild... No, really, we don’t. 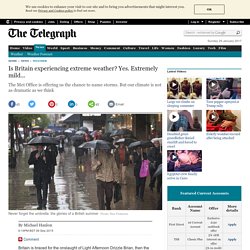 You thought it rained a lot in August? It was indeed damp, with seven or eight inches of rain falling in some places, making it the rainiest for 50 years. Major flooding in UK now likely every year, warns lead climate adviser. Major flooding in the UK is now likely to happen every year but ministers still have no coherent long-term plan to deal with it, the government’s leading adviser on the impacts of climate change has warned. 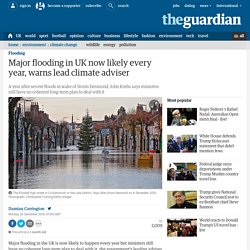 Boxing Day in 2015 saw severe floods sweep Lancashire and Yorkshire, just weeks after Storm Desmond swamped Cumbria and parts of Scotland and Wales. The flooding, which caused billions of pounds of damage, led to the government publishing a review in September which anticipates 20-30% more extreme rainfall than before. But Prof John Krebs, who leads the work on adapting to global warming for the government’s official advisers, the Committee on Climate Change (CCC), told the Guardian: “We are still a long way from where we need to be, in that there is still not a coherent long-term view.” Lord Krebs said it was important for both government and households to learn from the run of floods that have affected many parts of the country in recent years. iWonder - Ten of the worst weather events that shook Britain.