An innocent film about sustainable bananas. It’s Not Just Coal and Oil: Forests Are Key to Climate. Brazil is attacking climate change with cops and guns. 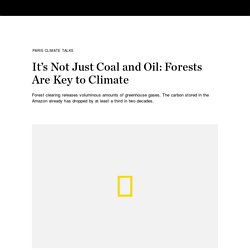 This spring, armed federal agents arrested businessman Ezequiel Castanha, the so-called "king of deforestation. " They accused him of paying gangs to remove a stretch of Amazon rainforest larger than Manhattan so he could sell the land to cattle ranchers. Brazil’s push to end illegal deforestation is a centerpiece of its strategy to tackle global warming. That's because 10 percent to 20 percent of global carbon dioxide emissions come from logging and land-clearing. When diplomats from around the world arrive in Paris on Nov. 30, many will be seeking to reduce emissions from coal, oil, and natural gas. I think we're at a critical moment. Gillian Gilford | University of Vermont Reducing deforestation is essential because removing trees and vegetation releases more CO2 than transportation. Certainly, the world in recent years has made great strides in curbing forest loss. Meanwhile, Africa's Congo is in flux. These people need food. G. Major Amazon dam opposed by tribes fails to get environmental license.

Plans to build a giant hydroelectric dam in the heart of the Amazon rainforest have been halted by Brazil’s environmental protection agency because of mounting concerns about the fate of indigenous communities and wildlife living in the area. 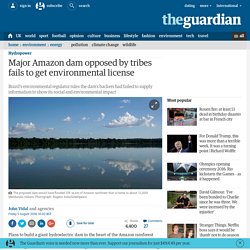 The 8,000-megawatt São Luiz do Tapajós (SLT) dam would have been the sixth-largest hydroelectric dam in the world, spanning the five-mile wide Tapajós river and drowning 376 sq km (145 sq miles) of rainforest that is home to some 12,000 Munduruku Indians. But in an unexpected announcement, the Ibama protection agency on Thursday cancelled development permits saying that an environmental impact study (EIA) submitted by a consortium of Brazilian, European and other companies seeking to build the dam had failed to present enough evidence to judge its social and ecological impacts. Leaders of the Munduruku people, who stood to lose much of their ancestral land and would have been forced to move, welcomed the announcement.

Selective Logging Doubles Amazon Forest Damage. A new, high-resolution analysis of satellite images reveals that in the Brazilian Amazon, as much forest is lost to selective logging as to outright deforestation, such as clearcutting or burning. 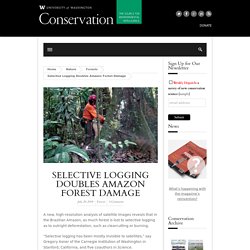 “Selective logging has been mostly invisible to satellites,” say Gregory Asner of the Carnegie Institution of Washington in Stanford, California, and five coauthors in Science. While deforestation is easy to monitor by satellite, selective logging has been harder to spot because the damage is at such a small scale. The ecological impact of cutting individual trees can be severe, however, in part because rainforest trees are linked by a network of sturdy vines. When a single large tree falls, it can pull down as many as 30 others. Selective logging causes long-term changes to forest structure. Population Decline of Indigenous People. Indigenous peoples inhabit a large portion of the Amazon rainforest and their traditional and cultural beliefs have existed for centuries, providing storage for an immense amount of knowledge about the tropical Amazon. 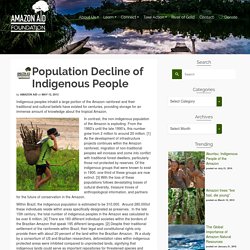 In contrast, the non-indigenous population of the Amazon is exploding. From the 1960’s until the late 1990’s, this number grew from 2 million to around 20 million. [1] As the development of infrastructure projects continues within the Amazon rainforest, migration of non-traditional peoples will increase and come into conflict with traditional forest-dwellers, particularly those not protected by reserves. Amazon deforestation jumps in Brazil, but remains historically low. Deforestation jumped 16 percent in the Brazilian Amazon to 5,831 square kilometers for the year ended July 31, 2015, but still remained well below historical levels, according to data released Thursday Brazil’s National Space Research Institute (INPE). 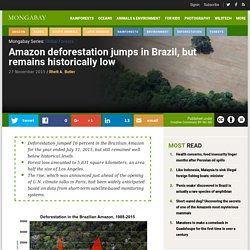 The rise, which was announced just ahead of the opening of U.N. climate talks in Paris, had been widely anticipated based on data from short-term satellite-based monitoring systems. Climbing deforestation has been attributed to several factors, including Brazil’s flagging economy and currency, which makes forest conversion for agriculture more attractive; the government’s steep cuts in funding for programs to reduce deforestation; a renewed push for large-scale infrastructure projects in the Amazon; and relaxation of the country’s Forest Code, which governs how much forest must be preserved on private lands. The latest INPE data are preliminary. Note: this post used text from a prior Mongabay post on the subject. Deforestation tripled in the Amazon, say researchers as experts warn more 'extreme events' According to Imazon, 22 square miles of rainforest were removed in March across the Amazon region, compared with 7.7 square miles in the same month last year. 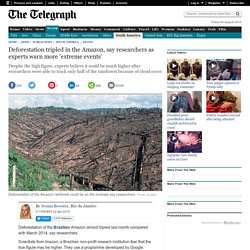 Its report said 1,094 square miles had been lost between August 2014 and March – a 214 per cent increase on the corresponding previous period. Calculating Deforestation in the Amazon. Calculating Deforestation Figures for the Amazon These figures are calculated from estimates provided by the Brazilian National Institute of Space Research (INPE) and the United Nations Food and Agriculture Organization (FAO). 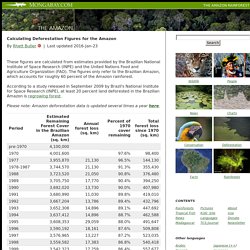 The figures only refer to the Brazilian Amazon, which accounts for roughly 60 percent of the Amazon rainforest. According to a study released in September 2009 by Brazil's National Institute for Space Research (INPE), at least 20 percent land deforested in the Brazilian Amazon is regrowing forest. Please note: Amazon deforestation data is updated several times a year here.