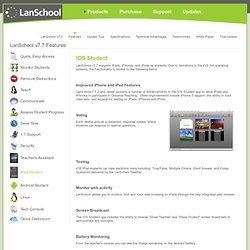 Due to limitations in the iOS 3/4 operating systems, the functionality is limited to the following items: Improved iPhone and iPad Features LanSchool 7.7.2 and newer contains a number of enhancements to the iOS Student app to allow iPads and iPhones to participate in Distance Teaching. Other improvements include iPhone 5 support, the ability to load class lists, and support for testing on iPads, iPhones and iPods. Voting Each device acts as a classroom response system where students can respond to teacher questions. Testing iOS iPad students can take electronic tests including: True/False, Multiple Choice, Short Answer, and Essay Questions delivered by the LanSchool Teacher. Monitor web activity LanSchool allows you to monitor, limit and track web browsing on iPads through the new integrated web browser Screen Broadcast Battery Monitoring. Casper Focus. Casper Focus lets teachers perform classroom management tasks from their own iPad and all by themselves—without assistance from the IT department. 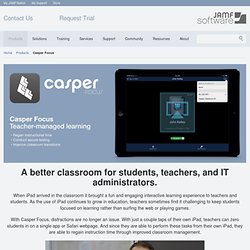 Teachers can guide classes through apps and webpages, or temporarily restrict students to a single app or webpage on their iPad in order to help keep them on task. If the classroom is equipped with an Apple TV, teachers have a simple option to either display their own device or prompt a student to display their device. And, if a student forgets or changes their passcode, the teacher can easily reset the passcode without calling the IT department.

Additionally, teachers can exclude students from a class, making it easy to handle exceptions for students who are home sick or otherwise removed from class who do not require app or webpage focus. The secure testing solution for iPad. Casper Focus lets teachers conduct summative and formative exams securely. Centrally managed and scalable. Casper Focus overview Learn More. Showbie - The paperless classroom made simple. Showbie - The paperless classroom made simple. For Education. The Teacher's Guide To The One iPad Classroom. Today, I’m going to tell you a fairy tale: Once upon a time, my mother in law (a third grade teacher) was in her classroom at school when her principal walked in and gave her an iPad for her class to use. 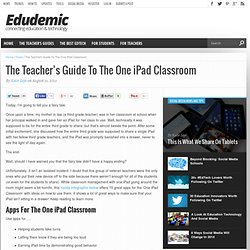 Well, technically it was supposed to be for the entire third grade to share, but that’s almost beside the point. After some initial excitement, she discussed how the entire third grade was supposed to share a single iPad with her fellow third grade teachers, and the iPad was promptly banished into a drawer, never to see the light of day again. The end. Wait, should I have warned you that the fairy tale didn’t have a happy ending? Unfortunately, it isn’t an isolated incident. Web Filtering in iOS 7. Now that iOS 7 is out, we can talk about some features. 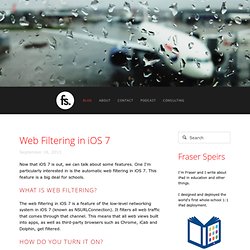 One I'm particularly interested in is the automatic web filtering in iOS 7. This feature is a big deal for schools. What is Web Filtering? The web filtering in iOS 7 is a feature of the low-level networking system in iOS 7 (known as NSURLConnection). It filters all web traffic that comes through that channel. How Do You Turn It On? There are two ways to activate web filtering. The automatic method is to build a Configuration Profile that enables the web filter and deliver that to devices via Apple Configurator or through an MDM server. How Do you Configure the Filtering? There are a number of aspects to the iOS 7 web filtering, each of which you can control.

Firstly, there is an automatic filter that tries to analyse the web page for adult content and block it. Further, there are both whitelists and blacklists that work alongside the auto-filter. What is the Impact for Schools? This feature impacts schools at a number of levels. iPad Acceptable Use Policy. iPad Aceptable Use Policy Although many schools have a good ICT Acceptable Use Policy, the introduction of iPads and other handheld devices is a great time to revisit your current policy. 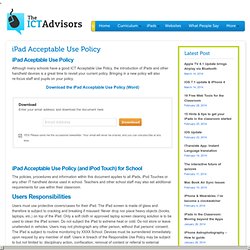 Bringing in a new policy will also re-focus staff and pupils on your policy. Download the iPad Acceptable Use Policy (Word) Download Enter your email address and download the document here iPad Acceptable Use Policy (and iPod Touch) for School The policies, procedures and information within this document applies to all iPads, iPod Touches or any other IT handheld device used in school. 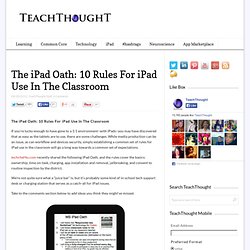 While media production can be an issue, as can workflow and devices security, simply establishing a common set of rules for iPad use in the classroom will go a long way towards a common set of expectations. techchef4u.com recently shared the following iPad Oath, and the rules cover the basics: ownership, time on-task, charging, app installation and removal, jailbreaking, and consent to routine inspection by the district. We’re not quite sure what a “juice bar” is, but it’s probably some kind of in-school tech support desk or charging station that serves as a catch-all for iPad issues. Take to the comments section below to add ideas you think they might’ve missed.