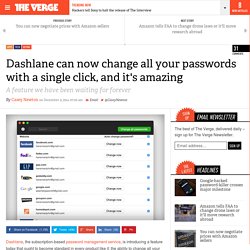 The feature will work with about 75 major websites at launch, including Amazon, Apple, Facebook, Google, LinkedIn, PayPal, Pinterest, and Twitter. Unique passwords, generated automatically Password Changer, as the feature is called, is made possible by Dashlane’s acquisition of PassOmatic, a New York startup that developed the core technology. For now, it works on desktop versions of Dashlane for PC and Mac, though the company is working on a mobile version. Dashlane now includes a big green "change all passwords" button; click it and it will replace your existing passwords with ones that are unique and randomly generated. Quantified sleep: new gadget from China wants in your bed. If someone wants to lose weight, they probably wouldn’t do so – or at least do so as effectively – without a scale to measure their progress. 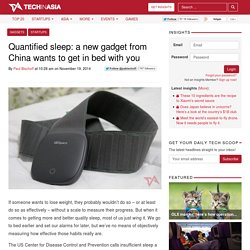 This Row Will Build You an Epic Upper Back. Every other workout or so, do you find yourself sitting at the chest fly, supported row, or preacher curl machine, banging out reps, feeling “the pump,” and loving every second of it? 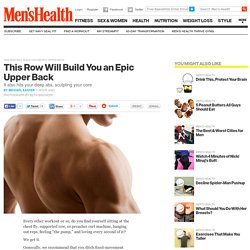 We get it. Generally, we recommend that you ditch fixed-movement machine exercises in favor of barbell, dumbbell, kettlebell, and cable lifts. They allow you to move through a natural range of motion and recruit more total muscle across your body. This Row Will Build You an Epic Upper Back. Simple Science Fitness. Burn Fat & Build Muscle for Healthy Humans. The Best Dumbbell Only Triceps Workout. Pushup Circuit. How to Change the Color of Anything in Photoshop. Base Color and Highlight Color When changing the color of an object in Photoshop there are ways to change the base color and the highlight color, we go over each of those methods in this episode. 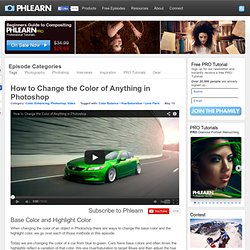 Today we are changing the color of a car from blue to green. Cars have base colors and often times the highlights reflect a variation of that color. We use Hue/Saturation to target Blues and then adjust the hue slider until we have a color we like. After choosing green as a base color we select out the highlights using Select Color Range and bring that selection into the Color Balance Adjustment layer. Adding Style with Lens Flare After we change the color of the car we couldn’t resist adding a nice lend flare to the image.

You will learn how you can layer mask a lens flare in Photoshop and even how to mask and blur it. Using Color Balance to Style Your Image To finish the image off we use a Color Balance adjustment layer. The Best GIFF You'll See Today. 27 startups in Asia that caught our eye (26 January 2014) Here’s our newest round-up of the featured startups on our site this week. 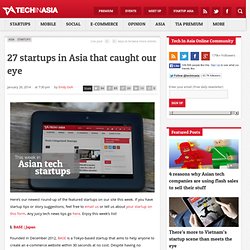 If you have startup tips or story suggestions, feel free to email us or tell us about your startup on this form. Any juicy tech news tips go here. Enjoy this week’s list! 1. BASE | Japan. Nobody calls me Sadowski. You got the wrong guy. I'm the Dude, man. Hi guys - After a very successful first post on our blog, I have decided to sit down and hit the keyboard one more time. 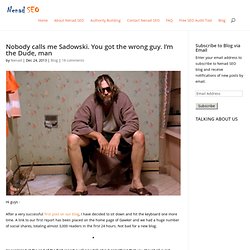 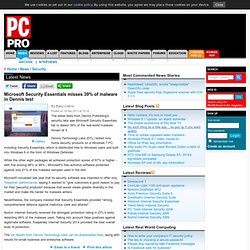 Dennis Technology Labs (DTL) tested nine home security products on a Windows 7 PC, including Security Essentials, which is distributed free to Windows users and built into Windows 8 in the form of Windows Defender. While the other eight packages all achieved protection scores of 87% or higher - with five scoring 98% or 99% - Microsoft's free antivirus software protected against only 61% of the malware samples used in the test. Microsoft conceded last year that its security software was intended to offer only "baseline" performance, saying it wanted to "give customers a good reason to pay for their [security] products" because that would create greater diversity in the market and make life harder for malware writers. How to Opt Out of Anyone on Google+ Landing in Your Gmail Inbox - Digits. The surprising reason we have a 40-hour work week (and why we should rethink it)

Welcome to Forbes. The 15 Best Websites, According to Redditors. Unraveling the ever-changing World Wide Web to find the very best sites can be a daunting and time consuming task. 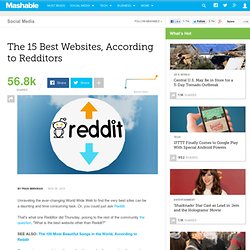 Or, you could just ask Reddit. That's what one Redditor did Thursday, posing to the rest of the community the question, "What is the best website other than Reddit? " Commenters sprang into action posting thousands of comment replies, naming sites that run the gamut from arcane to whimsical. Linux-flavored Windows. I never used to be a fan of the command line. 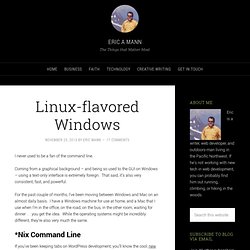 Coming from a graphical background – and being so used to the GUI on Windows – using a text-only interface is extremely foreign. That said, it’s also very consistent, fast, and powerful. For the past couple of months, I’ve been moving between Windows and Mac on an almost daily basis. Charles Manson Today: The Final Confessions of America's Most Notorious Psychopath.

How to increase your SEO. Google Plus is more than just a social media site. 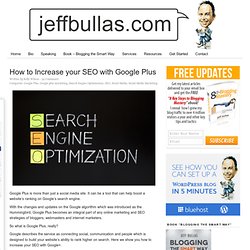 It can be a tool that can help boost a website’s ranking on Google’s search engine. With the changes and updates on the Google algorithm which was introduced as the Hummingbird, Google Plus becomes an integral part of any online marketing and SEO strategies of bloggers, webmasters and internet marketers. So what is Google Plus, really? Google describes the service as connecting social, communication and people which is designed to build your website’s ability to rank higher on search.