Here’s What 10 Experts Think of the Government’s New Diet Advice. The highly anticipated 2015 Dietary Guidelines for Americans were released on Thursday—and they’re proving controversial, with disagreement among industry and the nutrition community over whether red and processed meat should have been called out, and whether issues like sustainability should have been included. 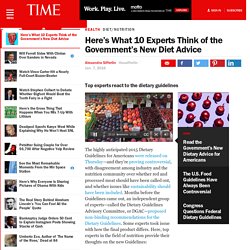 There are useful updates from the previous guidelines, such as a specific limit on sugar intake to <10% of calories. MORE: Ending The War On Fat. Making Sense of Latest US Dietary Guidelines. Earlier this month, the US government released its new Dietary Guidelines for Americans. 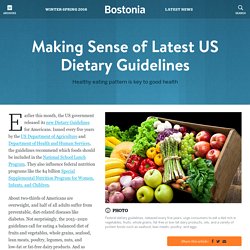 Issued every five years by the US Department of Agriculture and Department of Health and Human Services, the guidelines recommend which foods should be included in the National School Lunch Program. They also influence federal nutrition programs like the $4 billion Special Supplemental Nutrition Program for Women, Infants, and Children.

About two-thirds of Americans are overweight, and half of all adults suffer from preventable, diet-related diseases like diabetes. Dietary Guidelines for Healthy American Adults. Key Words: In 1957 the American Heart Association proposed that modification of dietary fat intake would reduce the incidence of coronary heart disease (CHD), which had become the leading cause of disability and death in the United States and other industrialized countries.1 Since then the AHA has issued seven policy statements on diet and CHD as reliable new information has become available.2 3 4 5 6 7 8 In each of these statements emphasis was placed on consumption of total fat, saturated and certain unsaturated fatty acids, dietary cholesterol, and sodium because of their significant contribution to risk of CHD. 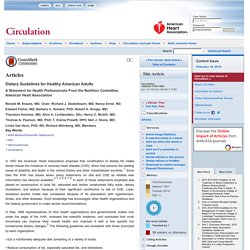 Later, excessive alcohol intake was considered because of its association with hypertension, stroke, and other diseases. Such knowledge has encouraged other health organizations and the federal government to make similar recommendations. • Eat a nutritionally adequate diet consisting of a variety of foods. GetSharedSiteSession?rc=4&redirect= To view the full text, please login as a subscribed user or purchase a subscription. 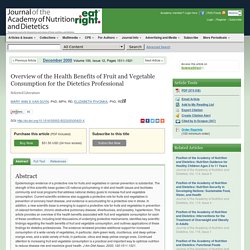 Click here to view the full text on ScienceDirect. Abstract Epidemiologic evidence of a protective role for fruits and vegetables in cancer prevention is substantial. The strength of this scientific base guides US national policymaking in diet and health issues and facilitates community and local programs that address national dietary goals to increase fruit and vegetable consumption. Current scientific evidence also suggests a protective role for fruits and vegetables in prevention of coronary heart disease, and evidence is accumulating for a protective role in stroke. To access this article, please choose from the options below. New Dietary Guidelines Crack Down On Sugar. But Red Meat Gets A Pass. Eat This, Not That: The U.S. government's latest Dietary Guidelines call on Americans to eat more vegetables and fruits, more seafood and whole grains, and to cool it on foods high in sugar, refined grains, sodium and saturated fats. 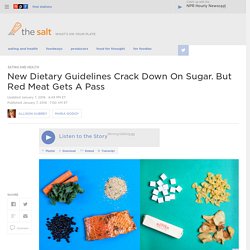 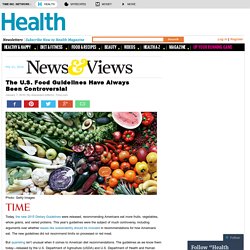 This year’s guidelines were the subject of much controversy, including arguments over whether issues like sustainability should be included in recommendations for how Americans eat. The new guidelines did not recommend limits on processed or red meat. But quarreling isn’t unusual when it comes to American diet recommendations. The guidelines as we know them today—released by the U.S. RELATED: The 50 (New) Healthiest Foods—With Recipes In 1977, the U.S. From that backlash emerged a decision to have the USDA and HHS partner.

Center for Nutrition Policy and Promotion. Three healthy diets from the new U.S. dietary guidelines. If you enjoy typical American fare but want to make sure you're eating right, the healthy American diet tells you how much of different food groups -- and certain items within each group -- to consume. 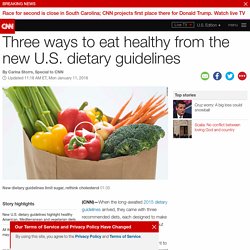 If you want to try that Mediterranean diet that has been linked with longevity and healthy brains, the guidelines map it out. And if you want to shift from meats to grains and vegetables, there are prescriptions for a vegetarian diet. "There is variety of healthy dietary patterns to follow, whatever tickles your fancy and your palate," said Joan Salge Blake, clinical associate professor in the nutrition program at Boston University and a registered dietitian. The dietary patterns are important because "(people) need help in knowing what a healthy diet is and to make it as easy as possible, you need to be able to see 'I need this many servings of this group and that group' and understand what the plate should look like," Blake said.