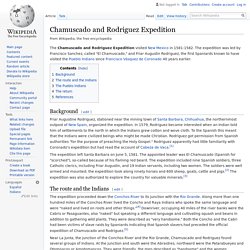 The expedition was led by Francisco Sanchez, called "El Chamuscado," and Friar Augustin Rodriguez, the first Spaniards known to have visited the Pueblo Indians since Francisco Vásquez de Coronado 40 years earlier. Background[edit] Friar Augustine Rodriguez, stationed near the mining town of Santa Barbara, Chihuahua, the northernmost outpost of New Spain, organized the expedition. In 1579, Rodriguez became interested when an Indian told him of settlements to the north in which the Indians grew cotton and wove cloth. 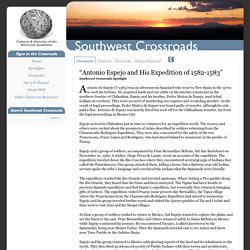 -1585) was an adventurous Spaniard who went to New Spain in the 1570s to seek his fortune. He acquired lands and ran cattle on his ranches (estancias) in the northern frontier of Chihuahua. Gaspar Castaño de Sosa - Wikipedia. Gaspar Castaño de Sosa was a Spanish colonist, reputed slaver, and explorer who attempted to establish a colony in New Mexico in 1590. 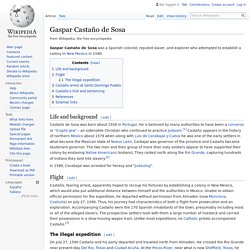 Life and background[edit] Castaño de Sosa was born about 1550 in Portugal. He is believed by many authorities to have been a converso or "Crypto-Jew" – an ostensible Christian who continued to practice Judaism.[1] Castaño appears in the history of northern Mexico about 1579 when along with Luis de Carabajal y Cueva he was one of the early settlers in what became the Mexican state of Nuevo León. Carbajal was governor of the province and Castaño became lieutenant governor. Umana and Leyba expedition - Wikipedia.

Umana and Leyba, Spanish colonists, made an unauthorized expedition to the Great Plains in 1594 or 1595. 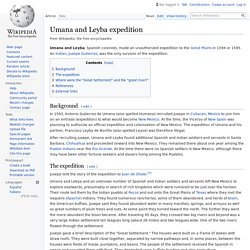 An Indian, Jusepe Gutierrez, was the only survivor of the expedition. Background[edit] In 1593, Antonio Gutierrez de Umana (also spelled Humana) recruited Jusepe in Culiacan, Mexico to join him on an entrada (expedition) to what would become New Mexico. At the time, the Viceroy of New Spain was planning to authorize an official expedition and colonization of New Mexico. 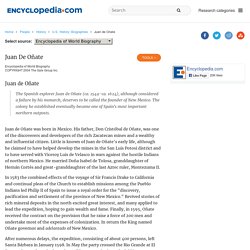 The Spanish explorer Juan de Oñate (ca. 1549-ca. 1624), although considered a failure by his monarch, deserves to be called the founder of New Mexico. The colony he established eventually became one of Spain's most important northern outposts. Colonization of New Mexico in the 16th century. By Robert Torrez For nearly fifty years following the expedition of Francisco Vasquez de Coronado, New Mexico was forgotten. 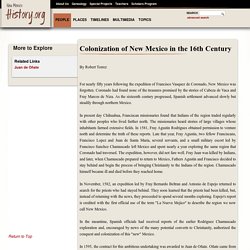 Coronado had found none of the treasures promised by the stories of Cabeza de Vaca and Fray Marcos de Niza. As the sixteenth century progressed, Spanish settlement advanced slowly but steadily through northern Mexico. Don Pedro de Peralta. Don Pedro de Peralta was the third governor of New Mexico. 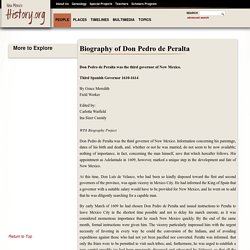 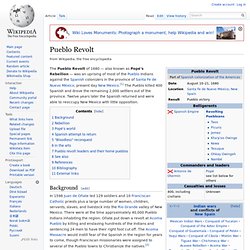 The Pueblo Revolt of 1680 — also known as Popé's Rebellion — was an uprising of most of the Pueblo Indians against the Spanish colonizers in the province of Santa Fe de Nuevo México, present day New Mexico.[1] The Pueblo killed 400 Spanish and drove the remaining 2,000 settlers out of the province. Twelve years later the Spanish returned and were able to reoccupy New Mexico with little opposition.