Eco Catholic. 18 Movies That Destroyed New York. New York is one of the biggest, most populated, and important cities in the United States, so it comes as no surprise that it makes an irresistible target for in-movie destruction. 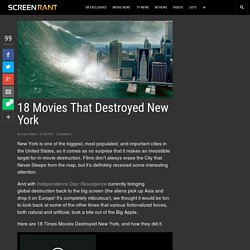 Films don’t always erase the City that Never Sleeps from the map, but it’s definitely received some interesting attention. And with Independence Day: Resurgence currently bringing global destruction back to the big screen (the aliens pick up Asia and drop it on Europe! It’s completely ridiculous!) , we thought it would be fun to look back at some of the other times that various fictionalized forces, both natural and artificial, took a bite out of the Big Apple. Here are 18 Times Movies Destroyed New York, and how they did it. 18. This one falls more under an attack than all-out destruction, but it’s basically impossible not to include a movie that’s about a bunch of tornadoes picking up a whole lot of sharks and flinging them at New York. The Sharknado series is full of mysteries. 17. 16. 15. 14. 13. 12. 11. Michel-foucault.com/ concepts. This page offers brief definitions of some of the key concepts in Foucault's work. 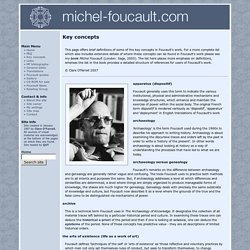 For a more complete list which also includes extensive details of where these concepts can be found in Foucault's work please see my book Michel Foucault (London: Sage, 2005). The list here places more emphasis on definitions, whereas the list in the book provides a detailed structure of references for users of Foucault's work. © Clare O'Farrell 2007 apparatus (dispositif) Foucault generally uses this term to indicate the various institutional, physical and administrative mechanisms and knowledge structures, which enhance and maintain the exercise of power within the social body. Archaeology 'Archaeology' is the term Foucault used during the 1960s to describe his approach to writing history. Archaeology versus genealogy.

Amazon. The Museum of Broadcast Communications - Encyclopedia of Television - Disasters and Television. One of television's most basic applications lies in its ability to portray the devastation of a disaster, whether nearby or far away, both as it occurs and in its aftermath. 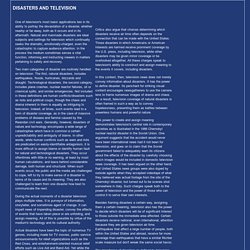 Natural and manmade disasters are ideal subjects and settings for television which continually seeks the dramatic, emotionally-charged, even the catastrophic to capture audience attention. In the process the medium sometimes serves a vital function, informing and instructing viewers in matters pertaining to safety and recovery.

Two main categories of disaster are routinely handled on television. The first, natural disasters, includes earthquakes, floods, hurricanes, blizzards and drought. Lucas Conley: Diagnosis: Obsessive Branding Disorder (Symptom #1. As the author of Obsessive Branding Disorder, a new book about the excesses of marketing, one of the most common questions I get from the media goes a little like this: "Aren't today's marketers just doing the same stuff they've been doing since the 1950s? 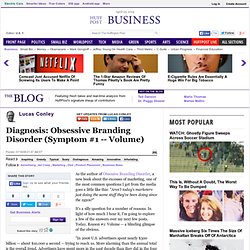 " It's a silly question for a number of reasons. In light of how much I hear it, I'm going to explore a few of the answers over my next few posts. Today, Reason #1: Volume -- a blinding glimpse of the obvious. "In 2006 U.S. advertisers spent nearly $300 billion -- about $10,000 a second -- trying to reach us. More alarming than the annual total is the overall trend.

Paul Virilio. Translated By Pauline Eiferman Cultural theorist Paul Virilio has been repeating essentially the same thing, packed inside different specifics at different times, over and over for the past 30 years. 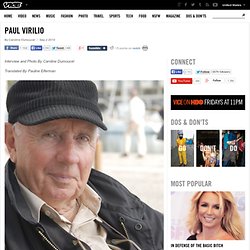 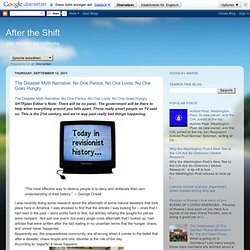 The government will be there to help when everything around you falls apart. Those really smart people on TV said so. This is the 21st century, and we’re way past really bad things happening. “The most effective way to destroy people is to deny and obliterate their own understanding of their history.” ~ George Orwell I was recently doing some research about the aftermath of some natural disasters that took place here in America.

According to newspaper articles written after Superstorm Sandy devastated the East Coast and after Hurricane Katrina caused countless billions in damage in New Orleans, people were calm, benevolent and peaceful. Untitled. Japan crises echo its pop culture disaster narratives. Like Hollywood in the 1970s, with its queasy procession of upside-down ships, crippled airplanes and towering infernos, postwar Japanese popular culture has had a taste for disaster. 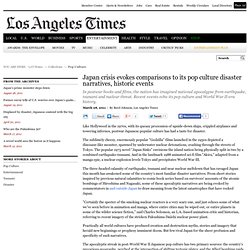 The sublimely cheesy, enormously popular "Godzilla" films launched in the 1950s depicted a dinosaur-like monster, spawned by underwater nuclear detonations, crashing through the streets of Tokyo. The popular 1973 novel "Japan Sinks" envisions the island nation being physically split in two by a combined earthquake-tsunami. And in the landmark 1988 animated sci-fi film "Akira," adapted from a manga epic, a nuclear explosion levels Tokyo and precipitates World War III. The three-headed calamity of earthquake, tsunami and near nuclear meltdown that has ravaged Japan this month has awakened some of the country's most familiar disaster narratives. Microsoft Word - 06-Rohr.doc - hsr2007_1020.pdf.

Julia Watts Belser - The Ethics of Representing Disaster. A narrative of disaster. The Japanese don’t call the events of 11 March an earthquake, tsunami or disaster, however massive. 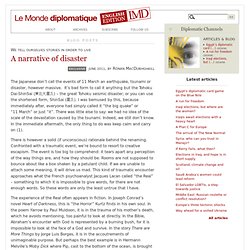