Where Our Food Crops Come From 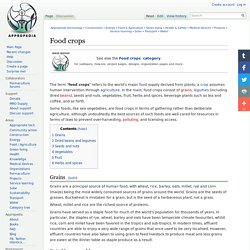 The top ten most valuable crops in the world are: Corn, Potatoes, Sweet Potatoes, Yams, Cassava, Soybeans, Sorghum, Plantains, Wheat, and Rice. Explanation of how farmers grow and cultivate crops properly. Did you know? 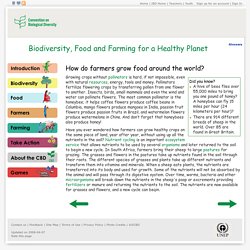 A hive of bees flies over 55,000 miles to bring you one pound of honey? A honeybee can fly 15 miles per hour (24 kilometers per hour)? There are 914 different breeds of sheep in the world. Over 85 are found in Great Britain. Globalization of the food system and the Green Revolution have decreased global agricultural biodiversity. A disturbing study conducted by the UN Food and Agriculture Organization (FAO) back in 1999 revealed that since the 1900s, 75% of agricultural crops have been lost, spiking a decline in plant variety and putting at risk what FAO defines as ‘agrobiodiversity.’ 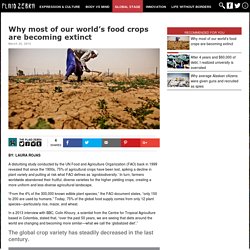 In turn, farmers worldwide abandoned their fruitful, diverse varieties for the higher yielding crops, creating a more uniform and less diverse agricultural landscape. “From the 4% of the 300,000 known edible plant species,” the FAO document states, “only 150 to 200 are used by humans.” Today, 75% of the global food supply comes from only 12 plant species—particularly rice, maize, and wheat. In a 2013 interview with BBC, Colin Khoury, a scientist from the Centre for Tropical Agriculture based in Colombia, stated that, “over the past 50 years, we are seeing that diets around the world are changing and becoming more similar—what we call the ‘globalized diet’.” 1. 2.

Thankfully, it’s not all bad news. Map of Worldwide Crops and Their Geographical Origins. [video] Origins of Food Across the World. Video Explaining the Mexican Origins of Corn. The Origins of The Most Widely Consumed Food Crop in the World: Rice. The origin of rice is buried in obscurity and the depths of time. 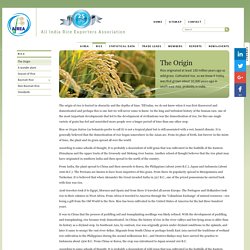 Till today, we do not know when it was first discovered and domesticated and perhaps this is one fact we will never come to know. [Open url to view in its entirety] Article detailing the sociological origins of how humans began domesticating and a list of different crop growing regions on the planet and the crops grown there. Research article detailing the importance for genetic study of crops for sustainability purposes and the details on different types of genetically modified food. Scientists successfully mapped the 32,000 genes of corn and seek to use the newly mapped genome to cultivate huge varieties of the crop. The complex corn genome—coming in at a hearty two billion base pairs (compared with the human genome's 2.9 billion base pairs)—has been mapped by more than 150 researchers, who worked for years to decipher the grain's genetic code. 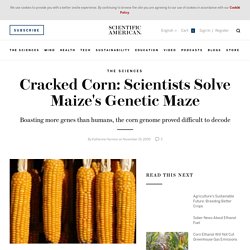 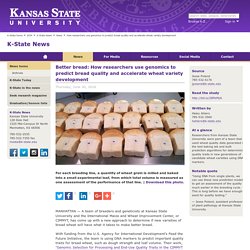 MANHATTAN — A team of breeders and geneticists at Kansas State University and the International Maize and Wheat Improvement Center, or CIMMYT, has come up with a new approach to determine if new varieties of bread wheat will have what it takes to make better bread. With funding from the U.S. Agency for International Development's Feed the Future Initiative, the team is using DNA markers to predict important quality traits for bread wheat, such as dough strength and loaf volume. Lead author is Sarah Battenfield, a Kansas State University doctoral graduate in genetics and former postdoctoral associate in plant pathology.

The Next Green Revolution will either be pro-GMO or seek better alternatives that are ecologically aware and more in tune with natural biodiversity and gene pools. The genes of all living things on Earth—including the sunflower, a valuable oil crop—consist of varying sequences of four chemical compounds: adenine, thymine, cytosine, and guanine, abbreviated as A, T, C, and G. 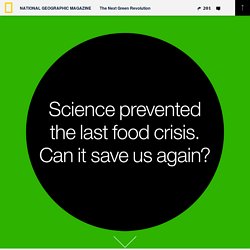 By identifying genes and manipulating them, scientists hope to create new crops that will help us face the challenges of global warming and population growth. By Tim Folger Photographs by Craig Cutler Modern supercrops will be a big help. But agriculture can’t be fixed by biotech alone. Something is killing Ramadhani Juma’s cassava crop. Mark breaks off some wet leaves; a few whiteflies dart away.

Juma is wearing torn blue shorts and a faded green T-shirt with “Would you like to buy a vowel?” The annual production and average yield of 10 of the most imporant crops in the world. Article detailing the inadequacies of food distribution to people worldwide and how our food distribution systems fail to accommodate to the starving populations of Earth. Enough food is produced worldwide to feed all the people in the world (Leathers, p. 133). 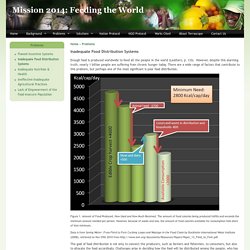 However, despite this alarming truth, nearly 1 billion people are suffering from chronic hunger today. There are a wide range of factors that contribute to this problem, but perhaps one of the most significant is poor food distribution. Figure 1. PDF pamphlet explaining the transportation of food crops worldwide contributes to pollution and commends the sale of local crops over imported crops. Graphic Depicting Percent of Land in the US devoted to Specific Crops, 2007. [section "Impact on Crops"] Climate Change causing higher temperatures, higher levels of carbon dioxide, and higher frequency of extreme weather has a negative impact on crop yield.

On This Page: Overview Agriculture is an important sector of the U.S. economy. 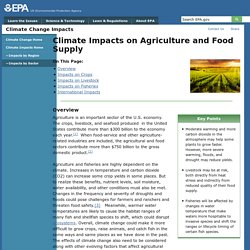 The crops, livestock, and seafood produced in the United States contribute more than $300 billion to the economy each year.[1] When food-service and other agriculture-related industries are included, the agricultural and food sectors contribute more than $750 billion to the gross domestic product.[2] Agriculture and fisheries are highly dependent on the climate. Increases in temperature and carbon dioxide (CO2) can increase some crop yields in some places. Impacts on Crops Despite technological improvements that increase corn yields, extreme weather events have caused significant yield reductions in some years. Click the image to view a larger version.