Cancer and Complementary Health Approaches. On this page: Introduction People with cancer want to do everything they can to combat the disease, manage its symptoms, and cope with the side effects of treatment. 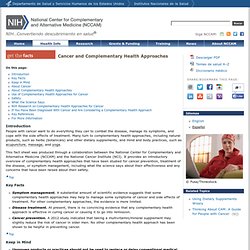 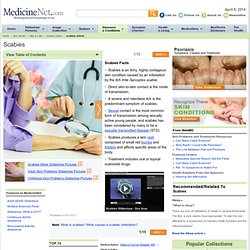 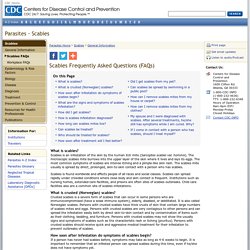 Scabies is an infestation of the skin by the human itch mite (Sarcoptes scabiei var. hominis). The microscopic scabies mite burrows into the upper layer of the skin where it lives and lays its eggs. Scabies. Scabies (from Latin: scabere, "to scratch"),[1] also known colloquially as the seven-year itch,[2] is a contagious skin infection caused by the mite Sarcoptes scabiei. 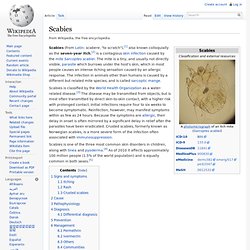 The mite is a tiny, and usually not directly visible, parasite which burrows under the host's skin, which in most people causes an intense itching sensation caused by an allergic response. The infection in animals other than humans is caused by a different but related mite species, and is called sarcoptic mange. Scabies is classified by the World Health Organization as a water-related disease.[3] The disease may be transmitted from objects, but is most often transmitted by direct skin-to-skin contact, with a higher risk with prolonged contact.

Initial infections require four to six weeks to become symptomatic. Reinfection, however, may manifest symptoms within as few as 24 hours. Signs and symptoms[edit] Itching[edit] Rash[edit] Commonly involved sites of rashes of scabies[7] Healing Arts CE: Diseases of the Skin. Scabies and Massage - Reviews. Last modified: April 24, 2013 By using or accessing (The Website) you hereby affirm you understand and agree to the following: This agreement is between you and Treato Ltd. 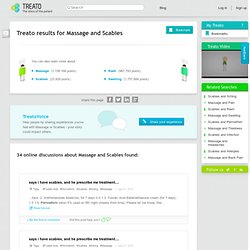 (Treato). Treato may transfer its rights and obligations according to this agreement to any third party at any time and at its sole discretion. You may not use The Website if you are unable to enter into this contractual relationship with Treato for any reason. WE ARE NOT DOCTORS AND THE WEBSITE DOES NOT SUBSTITUTE PROFFESIONAL MEDICAL ADVICE. Common Ligament Injuries and Disorders. Ligaments are the glue that holds us together. 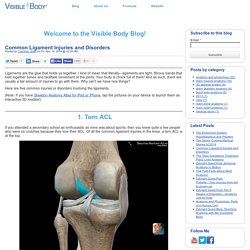 I kind of mean that literally—ligaments are tight, fibrous bands that hold together bones and facilitate movement of the joints. Your body is chock full of them! And as such, there are usually a fair amount of injuries to go with them. Why can't we have nice things? Here are five common injuries or disorders involving the ligaments. (Note: If you have Skeleton Anatomy Atlas for iPad or iPhone, tap the pictures on your device to launch them as interactive 3D models!) If you attended a secondary school as enthusiastic as mine was about sports, then you knew quite a few people who were on crutches because they tore their ACL. EzineArticles Submission - Submit Your Best Quality Original Articles For Massive Exposure, Ezine Publishers Get 25 Free Article Reprints. 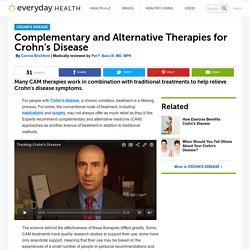 For some, the conventional route of treatment, including medications and surgery, may not always offer as much relief as they’d like. Experts recommend complementary and alternative medicine (CAM) approaches as another avenue of treatment in addition to traditional methods. The science behind the effectiveness of these therapies differs greatly. Some CAM treatments have quality research studies to support their use; some have only anecdotal support, meaning that their use may be based on the experiences of a small number of people or personal recommendations and not on controlled research trials. Is it a good idea to try some of these therapies if you have Crohn’s disease? Crohn’s Disease Complementary Therapies: A Complete Approach.

Massage for Digestive Disorders - altMD.com Article. Digestive disorders can be painful and unpleasant. 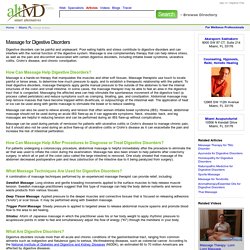 Poor eating habits and stress contribute to digestive disorders and can interfere with the normal function of the digestive system. Case Study: Rhythmical Massage Therapy for Crohn's Disease. I am a 30 year-old trainee architect and have recently completed my post-graduate degree course. 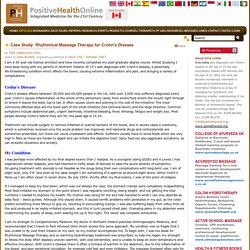 Whilst studying I have been living with my parents in Northern Ireland. At 15 I was diagnosed with Crohn’s disease, a potentially life-threatening condition which affects the bowel, causing extreme inflammation and pain, and bringing a variety of complications. Crohn’s Disease Crohn’s disease affects between 30,000 and 60,000 people in the UK, with over 3,000 new sufferers diagnosed every year. Crohn’s causes inflammation of the whole of the alimentary canal, from where food enters the mouth right through to where it leaves the body, top to tail.

Treatment can include surgery to remove inflamed or scarred sections of the bowel, and in severe cases a colostomy, which is sometimes reversed once the acute problem has improved. My Condition I was perhaps more affected by my final degree exams than I realized. I am no stranger to Complementary Medicine. How Massage Therapy Helps Crohn's.