"Externalities" The world's oceans under threat. The Economics of Sustainability – A Comparison of Economic Models. Dealing with the Overpopulation Myth. To start off, as long as the market system is in place and profit is the main motivation to do anything, what I talk about won't happen (social entrepreneurs, fortunately, aren't profit-motivated, but that's a different discussion). 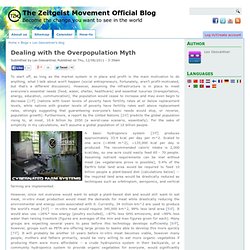 However, assuming the infrastructure is in place to meet everyone's essential needs (food, water, shelter, healthcare) and essential luxuries (transportation, energy, education, communication), the population would cease to increase and may even begin to decrease [1] (nations with lower levels of poverty have fertility rates at or below replacement levels, while nations with greater levels of poverty have fertility rates well above replacement rates, strongly suggesting that guaranteeing everyone's basic needs would stop, or reverse, population growth). Furthermore, a report by the United Nations [2] predicts the global population rising to, at most, 10.6 billion by 2050 (a worst-case scenario, essentially). Education is easier. Globalized Growth Is the Problem, Localism Is the Solution. (Photo: Steve Goodyear)The ceaseless expansion of economic exploitation, the engine of global capitalism, has come to an end.

The futile and myopic effort to resurrect this expansion—a fallacy embraced by most economists—means that we respond to illusion rather than reality. We invest our efforts into bringing back what is gone forever. This strange twilight moment, in which our experts and systems managers squander resources in attempting to re-create an expanding economic system that is moribund, will inevitably lead to systems collapse. Dr Jack Visits the Earthships. Eco-homes: Living the good life. "Is Modern Capitalism Sustainable?" by Kenneth Rogoff. Exit from comment view mode. 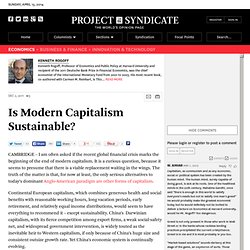 Click to hide this space CAMBRIDGE – I am often asked if the recent global financial crisis marks the beginning of the end of modern capitalism. Can Civilization Survive Capitalism? The term "capitalism" is commonly used to refer to the U.S. economic system, with substantial state intervention ranging from subsidies for creative innovation to the "too-big-to-fail" government insurance policy for banks. 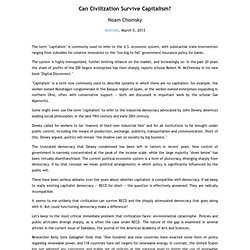 The system is highly monopolized, further limiting reliance on the market, and increasingly so: In the past 20 years the share of profits of the 200 largest enterprises has risen sharply, reports scholar Robert W. McChesney in his new book "Digital Disconnect. " "Capitalism" is a term now commonly used to describe systems in which there are no capitalists: for example, the worker-owned Mondragon conglomerate in the Basque region of Spain, or the worker-owned enterprises expanding in northern Ohio, often with conservative support -- both are discussed in important work by the scholar Gar Alperovitz.

Robert F. Kennedy challenges Gross Domestic Product. Planned Obsolescence – The Obvious Insanity of Capitalism. In today’s capitalist world, all of our collective hopes and dreams are thought to have the best chance of manifestation through the practice of maximizing profit. 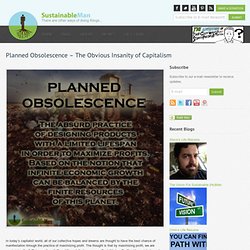 The thought is that by maximizing profit, we are maximizing the “efficiency of capital”, and through that process an “invisible hand” will guide society towards prosperity for all. For centuries, this practice worked. Four hundred years ago, John Locke, one of the founding fathers of capitalism, observed that average citizens lacked access to basic goods such as bed linens, books, pots and pans, utensils, and many others. Resources at the time were truly abundant and for all intents and purposes, limitless. An economic system was born to facilitate the transformation of raw materials into usable products to make the daily lives easier for the entire population. To induce additional growth, a concept of planned obsolescence was developed. Why are Conservatives Childishly Opposed to Environmentalism? Eleven Fifty Nine. We Are Now One Year Away From Global Riots, Complex Systems Theorists Say. Wednesday, September 12th, 2012. 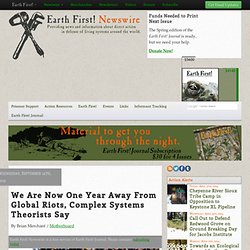 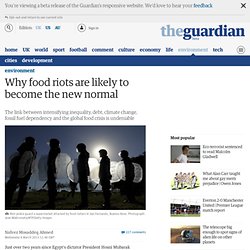 Cairo's infamous Tahrir Square has remained a continual site of clashes between demonstrators and security forces, despite a newly elected president. It's the same story in Tunisia, and Libya where protests and civil unrest have persisted under now ostensibly democratic governments. The problem is that the political changes brought about by the Arab spring were largely cosmetic.

Scratch beneath the surface, and one finds the same deadly combination of environmental, energy and economic crises. We now know that the fundamental triggers for the Arab spring were unprecedented food price rises. Since 2008, global food prices have been consistently higher than in preceding decades, despite wild fluctuations.

We Are Close To Global Riots. Syria, Water, Climate Change, and Violent Conflict – Significant Figures by Peter Gleick. There is a long history of conflicts over water – the Pacific Institute maintains an online, searchable chronology of such conflicts going back 5,000 years. 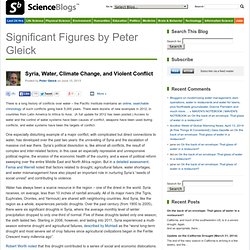 There were dozens of new examples in 2012, in countries from Latin America to Africa to Asia. (A full update for 2012 has been posted.) Experts Fear Collapse of Global Civilisation. By Stephen Leahy | 11 January 2013IPS. 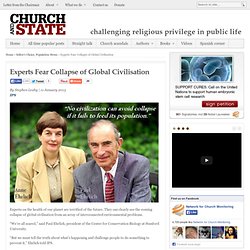 World Water Day: 10 facts you ought to know. Could the Middle East run out of water? New NASA images warn of water shortage. Peter Joseph Radio Lecture "A Profile of Collapse" [ The Zeitgeist Movement ] The Socialist Party of Great Britain. Is Earth F*cked? Scientist Says Yes, and He's Not Even Talking About the Outcome of COP18. Koshy koshy/CC BY 2.0 Talk about great timing: COP18 is over, after two weeks of the usual brinksmanship bargaining adding up to virtually nothing worthwhile (if the goal is still to actually come up with a political deal to combat climate change). And now, as io9 reports, we have scientific data proving something that many TreeHugger readers, climate change politics watchers, biodiversity wonks, anti-deforestation activists, consumer culture critics already probably know, or at least fear, deep down in their hearts: Earth is fucked.

Don't blame me for lack of decorum in using such language—and frankly, if you convinced that a bit of cussing is the worst problem we've got, the biggest sign of impeding civilizational collapse, you've come to the wrong shop—it's straight from the title of a recent talk at the annual American Geophysical Union conference.

Peak soil: industrial civilisation is on the verge of eating itself. A new report says that the world will need to more than double food production over the next 40 years to feed an expanding global population. 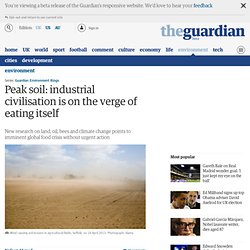 But as the world's food needs are rapidly increasing, the planet's capacity to produce food confronts increasing constraints from overlapping crises that, if left unchecked, could lead to billions facing hunger. The UN projects that global population will grow from today's 7 billion to 9.3 billion by mid-century. According to the report released last week by the World Resources Institute (WRI), "available worldwide food calories will need to increase by about 60 percent from 2006 levels" to ensure an adequate diet for this larger population.

At current rates of food loss and waste, by 2050 the gap between average daily dietary requirements and available food would approximate "more than 900 calories (kcal) per person per day. " Earth 'on course for eco-crunch' The planet is headed for an ecological "credit crunch", according to a report issued by conservation groups.

The document contends that our demands on natural resources overreach what the Earth can sustain by almost a third. China Is Burning Almost as Much Coal as Rest of the World Combined. World 'on collision course with nature', OECD green growth report warns. Green growth is the only way forward for rich and poor countries alike to achieve sustainable development because of tremendous economic and livelihood losses from severe climate change and the depletion of natural resources, a thinktank said on Tuesday. The Development Co-operation report 2012 by the Organisation for Economic Co-operation and Development (OECD) calls for radical changes to an economic model in which rapid growth has come at a price for the environment and many of the world's poorest people. "We are on a collision course with nature," Angel Gurría, the OECD secretary general, said at the launch of the report on Tuesday in the ornate surroundings of Marlborough House in London, as he urged developing countries not to adopt the "develop first, clean up later" approach.

"It is time for a radical change. Pam Warhurst: How we can eat our landscapes. Edible City: Grow the Revolution (2012. Internet of food: Arduino-based, urban aquaponics in Oakland. Game Over For The Climate? Game Over For The Climate? In Alerts 2012 Post 19 June 2012 Last Updated on 05 June 2013. Capitalism Has Run Its Course. Welcome to the Rest of Our Lives. Study predicts imminent irreversible planetary collapse. Drivers of a potential planetary-scale critical transition (credit: Anthony D. Barnosky et al. An Inconvenient Question - Socialism and the Environment. Introduction. The-cancer-stage-of-capitalism. Thursdays, 8pm on ABC1. UN urges global move to meat and dairy-free diet.

A global shift towards a vegan diet is vital to save the world from hunger, fuel poverty and the worst impacts of climate change, a UN report said today. It says: "Impacts from agriculture are expected to increase substantially due to population growth increasing consumption of animal products. Unlike fossil fuels, it is difficult to look for alternatives: people have to eat. A substantial reduction of impacts would only be possible with a substantial worldwide diet change, away from animal products. " Eat less meat and improve farming efficiency to tackle climate change. We need to eat less meat and recycle our waste to rebalance the global carbon cycle and reduce our risk of dangerous levels of climate change. Halve meat consumption, scientists urge rich world. People in the rich world should become "demitarians" – eating half as much meat as usual, while stopping short of giving it up – in order to avoid severe environmental damage, scientists have urged, in the clearest picture yet of how farming practices are destroying the natural world.

They said the horsemeat scandal had uncovered the dark side of our lust for meat, which has fuelled a trade in undocumented livestock and mislabelled cheap ready meals. "There is a food chain risk," said Prof Mark Sutton, who coined the term demitarian and is lead author of a UN Environment Programme (Unep) study published on Monday. In examining the hypothetical situation of a world of human vegetarians, a few simplifications must be made. Ecological Effects of a Meat-Based Diet. Collapse - The End Of The Age Of Oil. 300 Years of FOSSIL FUELS in 300 Seconds. A Crude Awakening - The Oil Crash (2006) There's No Tomorrow. Could ‘economic peak oil’ rival the banking crisis?

By Tierney Smith nef warns that nations’ dependence on oil could cripple their economies and prices rise (Source: Damian Gadal) ‘Economic peak oil’ could cripple the world’s economies by 2014 according to a UK-based think tank, which recommends governments take urgent action to wean their economies off fossil fuels. Peak Oil and a Changing Climate. How will peak oil affect the economy? Energy Shock: How Peak Oil Will Change Your Life. No Jobs & No Oil: the unsustainability of full employment and cheap energy - Jake Gordon's Dissertation. Oil: In perpetuity no more - Features. The End of growth-Richard Heinberg. IMF study: Peak oil could do serious damage to the global economy. YOU ARE HERE: The Oil Journey (Narrated by Peter Coyote) Story of Stuff (2007, OFFICIAL Version)