How to Lead Change Management. Waterstones can live with Amazon and stem losses, says James Daunt. In just a few years, Waterstones has gone from being the villain of the book world to the plucky underdog. 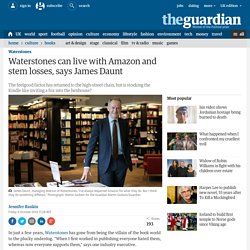 "When I first worked in publishing everyone hated them, whereas now everyone supports them," says one industry executive. As hundreds of independent booksellers have shut up shop, publishers are desperate to see a specialised high-street bookseller survive and thrive. But a lot of the goodwill also has to do with James Daunt, Waterstones' managing director, who gave up running his small chain of independent bookshops to turn around the retail giant.

When Daunt arrived two years ago – hired by Alexander Mamut, the Russian billionaire who bought the chain from HMV – Waterstones was in trouble. Sales were dropping through the floor, bookselling staff were disillusioned, while the literati despaired that Waterstones stocked more copies of Jordan's autobiography than Tolstoy or Dickens. "That was Waterstones' business model," he says. It is too soon to say if integrity will pay off. What Consumer Culture Will Look Like In 2020 (And How Brands Can Adapt) The global recession hasn’t changed our consumer culture all that much, but just wait a few years. 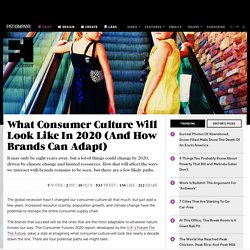 Increased resource scarcity, population growth, and climate change have the potential to reshape the entire consumer supply chain. The brands that succeed will be the ones that are the most adaptable to whatever nature throws our way. The Consumer Futures 2020 report, developed by the U.K.'s Forum For The Future, takes a stab at imagining what consumer culture will look like nearly a decade down the line. There are four potential paths we might take: My Way In this scenario, the economy is prosperous and entrepreneurial, local government thrives (but national government is weak), society is optimistic but still divided between the 1% and the rest of us, and we mostly buy items from local brands, individual producers, and online exchanges. This is a fairly rosy view of our future—one where we rise up from the current recession and modify supply chains to become much more fluid. Sell It To Me. Company Culture, What It Is And How To Change It.

Company Culture A culture is the values and practices shared by the members of the group. 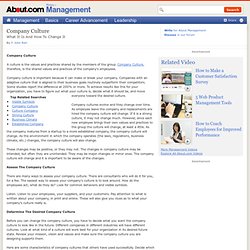 Company Culture, therefore, is the shared values and practices of the company's employees. Company culture is important because it can make or break your company. Companies with an adaptive culture that is aligned to their business goals routinely outperform their competitors. Some studies report the difference at 200% or more. Company cultures evolve and they change over time. These changes may be positive, or they may not. 10 Ways to Build a Business Culture Like Apple. After Steve Jobs' Death, Culture Shock Is Inevitable at Apple. It's a new day at Apple (AAPL). 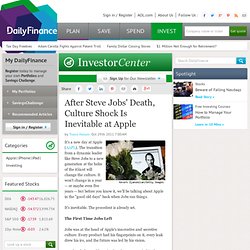 The transition from a dynamic leader like Steve Jobs to a new generation at the helm of the iGiant will change the culture. It won't change in a year -- or maybe even five years -- but before you know it, we'll be talking about Apple in the "good old days" back when Jobs ran things. It's inevitable. The precedent is already set. The First Time Jobs Left Jobs was at the head of Apple's innovative and secretive culture. We already have a blueprint for what went on in his absence: When he was fired in the 1980s, Apple went from the forefront of the personal computer to a technology wanderer for the next decade. 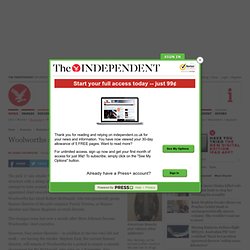 The changes come just over a month after Steve Johnson became Woolworths' chief executive. However, four senior directors – in addition to the two who left last week – are leaving the retailer. Apple’s cash hoard reaches $137 billion. $137,000,000,000 is a lot of money. 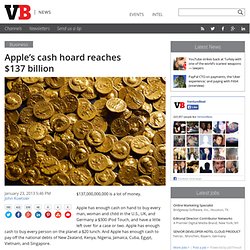 “No technology company has ever reported results like this,” Apple CEO Tim Cook said today, speaking about the company’s first quarter results which included record quarterly revenue of $54.5 billion and record quarterly profit of $13.1 billion. In the three months of the quarter, Apple added $16 billion to its existing cash reserves of $121 billion. $94 billion of the total $137 billion is sitting offshore, CFO Peter Oppenheimer said. Apple is not the only technology company with bulging bank accounts. And frankly even — with $137 billion — a bad year or two.