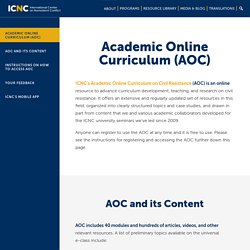 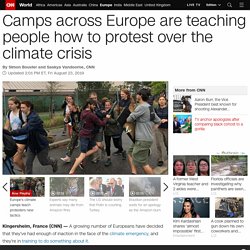 Outside the venue, camp attendees joyfully practiced their freshly minted demonstration skills and waved colorful placards of their own design before phalanxes of fake police officers. "Some people here in the camp are soon going to be on trial," said Pauline Boyer, an organizer of the Kingersheim camp. She was referring to environmental activists who, in protest at what they see as weak climate policy, walked into city halls across the country this summer to illegally remove over 100 portraits of French President Emmanuel Macron from the walls.

The idea is that the empty space where the photographs used to hang are a symbol the Macron government's dereliction of duty when it comes to climate change. A growing movement. The Problem Is Civil Obedience. NONVIOLENCE, 20 May 2019 Howard Zinn | Zinn Reader – TRANSCEND Media Service By the latter part of May, 1970, feelings about the war in Vietnam had become almost unbearably intense. 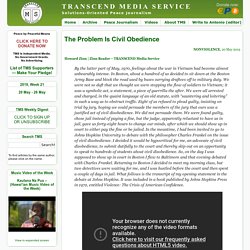 In Boston, about a hundred of us decided to sit down at the Boston Army Base and block the road used by buses carrying draftees off to military duty. We were not so daft that we thought we were stopping the flow of soldiers to Vietnam; it was a symbolic act, a statement, a piece of guerrilla the after. 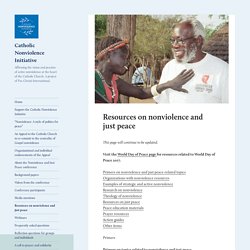 Visit the World Day of Peace page for resources related to World Day of Peace 2017. Primers on nonviolence and just peace-related topicsOrganizations with nonviolence resourcesExamples of strategic and active nonviolenceResearch on nonviolenceTheology of nonviolenceResources on just peacePeace education materialsPrayer resourcesAction guidesOther items. International Center on Nonviolent Conflict Submission Manager - Application FSI 2016. This is the official online application form for the 2016 Fletcher Summer Institute for the Advanced Study of Nonviolent Conflict (FSI). 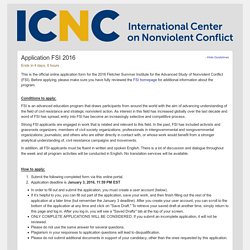 Before applying, please make sure you have fully reviewed the FSI homepage for additional information about the program. Conditions to apply: FSI is an advanced education program that draws participants from around the world with the aim of advancing understanding of the field of civil resistance and strategic nonviolent action. As interest in this field has increased globally over the last decade and word of FSI has spread, entry into FSI has become an increasingly selective and competitive process. Strong FSI applicants are engaged in work that is related and relevant to this field.

In addition, all FSI applicants must be fluent in written and spoken English. How to apply: If you have any questions or difficulties with the online form please send an email to fsi@nonviolent-conflict.org. African Great Lakes Initiative: Helping to create a more peaceful future in Africa. AGLI Programs AVP: These are three-day experiential workshops that teach participates non-violent means of resolving conflicts. 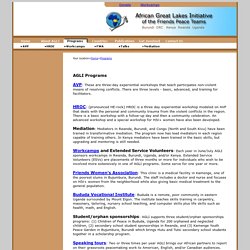 There are three levels - basic, advanced, and training for facilitators. HROC: (pronounced HE-rock) HROC is a three day experiential workshop modeled on AVP that deals with the personal and community trauma from the violent conflicts in the region. There is a basic workshop with a follow-up day and then a community celebration. An advanced workshop and a special workshop for HIV+ women have also been developed. 8 ways to defend against terror nonviolently. Cet article est disponible en français. 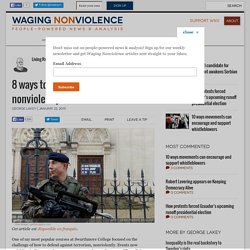 One of my most popular courses at Swarthmore College focused on the challenge of how to defend against terrorism, nonviolently. Events now unfolding in France make our course more relevant than ever. (The syllabus was published in “Peace, Justice, and Security Studies: A Curriculum Guide” in 2009.) In fact, the international post-9/11 “war against terror” has been accompanied by increased actual threats of terror almost everywhere. In the first place, who knew that non-military techniques have, in actual historical cases, reduced the threat of terror? I gathered for the students eight non-military techniques that have worked for some country or other. Each student chose a country somewhere in the world that is presently threatened by terrorism and, taking the role of a consultant to that country, devised from our nonviolent toolbox a strategy for defense. It was tough work, and highly stimulating.

The Center for Nonviolent Communication. King Institute Home. GandhiServe - Mahatma Gandhi, as he really was!