Timeline: Women’s Footprint in History. Agnodice Recognized as one of the first female gynecologists, Agnodice is said to have courageously practiced medicine in Greece when women faced the death penalty for doing so. 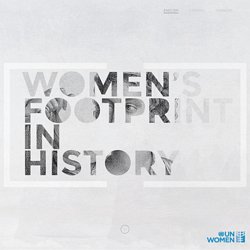 Eventually caught, she was vindicated and allowed to continue when patients came to her defense. Despite extraordinary medical advances throughout history, more than 800 women still die every day from preventable causes related to pregnancy and childbirth – 99 per cent of them in developing countries. Sor Juana Inés de la Cruz Following criticism for studying secular texts, celebrated writer and nun Sor Juana Inés de la Cruz of Mexico memorably defended women’s rights to education in 1691 by proclaiming “one can perfectly well philosophize while cooking supper. " Even with substantial progress in achieving gender parity at all levels of education, disparities remain in some developing regions. Anna Filosofova Kate Sheppard Women’s representation is still lagging in politics. Raichō Hiratsuka Doria Shafik 24% less. Project Vox. 10 Amazing Women Who Led Rebellions.

History Male revolutionaries such as Che Guevara have gone down as heroes for leading rebellions against “the Man.” But forgotten by history are the women who took on far greater powers than Fulgencio Batista. Throughout the ages, women have led rebellions and revolutions which took on the might of the Roman Empire and the vast wealth of the British East India Company. 10 Yaa Asantewaa Yaa Asantewaa, described as the African Joan of Arc, was Queen Mother of the Edweso region, part of the former Asante Kingdom and now modern-day Ghana. When the Asante began to resist British rule, the British Governor, Lord Hodgson, demanded that they turn over their Golden Stool, used as a throne and symbol of independence. Shortly after, on March 28, 1900, what was left of the monarchy was assembled and the British Captain demanded the Stool.

This speech caused the Yaa Asantewaa War for Independence to break out on the same day. 9 Corazon Aquino 8 Laskarina Bouboulina 7 Queen Mavia Of Arabia 5 Leymah Gbowee. Female Pirates - Women in Piracy. History of our world is full of many tales of piracy, but none are more interesting than those two describe the adventures and struggles of female pirates. 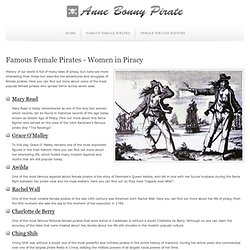 Here you can find out more about some of the most popular female pirates who spread terror across seven seas. Mary Read. 14 Things You Probably Didn't Know About Margaret Atwood. Women Who Conquered the Comic Book World. [This article is excerpted with permission from Collectors Weekly. 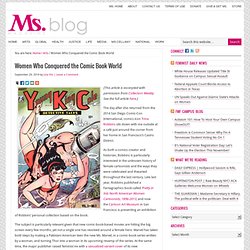 See the full article here.] The day after she returned from the 2014 San Diego Comic-Con International, comics icon Trina Robbins sits down with me outside at a café just around the corner from her home in San Francisco’s Castro District. As both a comics creator and historian, Robbins is particularly interested in the unknown history of female cartoonists and the ways they were celebrated and thwarted throughout the last century. Late last year, Robbins published a Fantagraphics book called Pretty in Ink: North American Women Cartoonists, 1896-2013, and now the Cartoon Art Museum in San Francisco is presenting an exhibition of Robbins’ personal collection based on the book.

The subject is particularly relevant given that new comic-book-based movies are hitting the big screen every few months, yet not a single one has revolved around a female hero. I found that comic in one of those houses, possibly the green one. At Swords’ Point: Humor As Weapon. Nowhereland - Elin Matilda Elisabet Wägner (1882-1949) was a... The Juice Factory. In today’s society, it’s easy to forget the... Celebrating Jerrie Mock, the First Woman to Fly Around the World. On April 3, 1964, Jerrie Mock stood next to her Cessna 180 at Dhahran Airport in the Kingdom of Saudi Arabia. 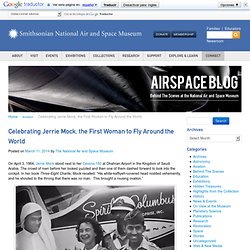 The crowd of men before her looked puzzled and then one of them dashed forward to look into the cockpit. In her book Three-Eight Charlie, Mock recalled: “His white-kaffiyeh-covered head nodded vehemently, and he shouted to the throng that there was no man. This brought a rousing ovation.” Jerrie Mock’s solo arrival at Dhahran, Saudi Arabia stunned the crowd. Arabian-American Oil Co. What in the world was an American woman doing flying a plane alone to Saudi Arabia where no woman was allowed to drive a car? Mock’s Cessna 180, which affectionately called “Charlie” is suspended at the Museum’s Steven F. While a far cry from the average pilot of the era, defined as a male weighing 180 pounds, the petite Mock was also not your average suburban wife — to be honest, she was bored, and so she earned her pilot license at age 32. Geraldine L. Tags: Cessna, Jerrie Mock, Three-Eight Charlie. Womenwhokickass.tumblr. Womenwhokickass.tumblr.