List of Texas state symbols. The following is a list of symbols of the U.S. state of Texas. 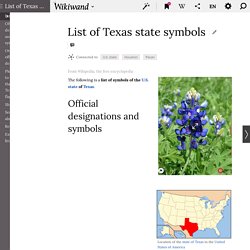 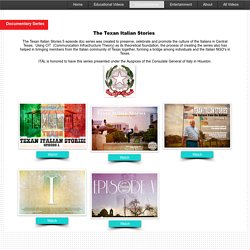 Using CIT (Communication Infractructure Theory) as its theoretical foundation, the process of creating the series also has helped in bringing members from the Italian community of Texas together, forming a bridge among individuals and the Italian NGO's in Texas. ITAL is honored to have this series presented under the Auspices of the Consulate General of Italy in Houston. The Texan Italian Stories. Texas Without Syrian and Lebanese Refugees Would Not Be Texas. More specifically, Houston might be not be a world-class medical center, Austin might not be the Live Music Capital of the World, and the Aggies might not have that recent Heisman Trophy-winning alum. 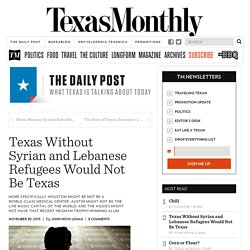 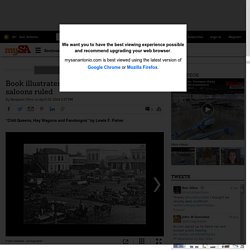 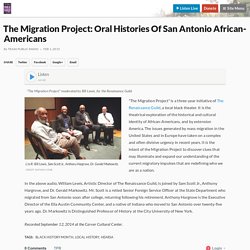 "The Migration Project" is a three-year initiative of The Renaissance Guild, a local black theater. It is the theatrical exploration of the historical and cultural identity of African-Americans, and by extension America. The issues generated by mass migration in the United States and in Europe have taken on a complex and often divisive urgency in recent years. 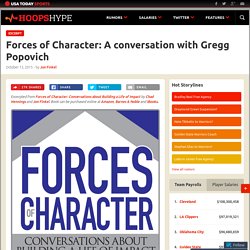 Book can be purchased online at Amazon, Barnes & Noble and iBooks. To me, San Antonio Spurs head coach Gregg Popovich represents the quintessential model of continued excellence. He’s been at the helm of the Spurs for almost twenty years, and in that time he’s won five NBA championships and three Coach of the Year awards. What’s even more impressive, and what is most pertinent to this book, is that San Antonio has built a reputation as an organization known for its high character. 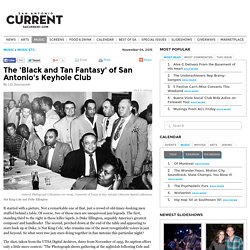 Not a remarkable one at that, just a crowd of old-timey-looking men stuffed behind a table. Of course, two of those men are unequivocal jazz legends. Five Songs about San Antonio, Texas. Click through the slideshow to see the songs that shout out the... Photo-photo.69042. Destination SoundtrackDestination Soundtrack. Discover the very best songs about San Antonio, Texas. 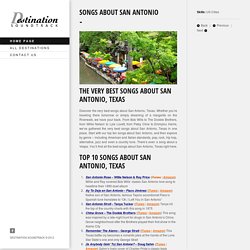 Whether you’re traveling there tomorrow or simply dreaming of a margarita on the Riverwalk, we have your back. From Bob Wills to The Doobie Brothers, from Willie Nelson to Lyle Lovett, from Patsy Cline to Emmylou Harris, we’ve gathered the very best songs about San Antonio, Texas in one place. Start with our top ten songs about San Antonio, and then explore by genre – including American and Italian standards, pop, rock, hip hop, alternative, jazz and even a country tune. Our Lady of the Lake University - Miss Fiesta: A rich legacy of OLLU winners. On March 15, 1961, 12 young women vying for the title of Miss Fiesta were introduced to a large and enthusiastic Municipal Auditorium crowd, a gathering comprised primarily of college students. 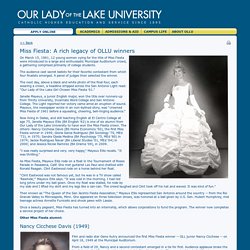 The audience cast secret ballots for their favorite contestant from which four finalists emerged. A panel of judges then selected the winner. The next day, above a black and white photo of the final four, each wearing a crown, a headline stripped across the San Antonio Light read: “Our Lady of the Lake Girl Chosen Miss Fiesta ‘61.” Janelle Mayeux, a junior English major, won the title over runners-up from Trinity University, Incarnate Word College and San Antonio College. Debunking Texas Exceptionalism - Pacific Standard. "Clearly, population grows more quickly in places where work is rewarded and the price on that work is kept low. 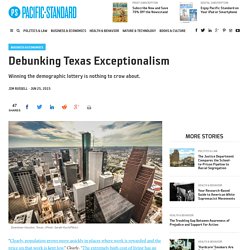 " Clearly. "The extremely high cost of living has an obvious cause and an obvious conservative solution. " Without clear recovery policy, Texas struggles to overcome flooding disaster - DecodeDC Story. WASHINGTON, D.C. - For four years, Texas lawmakers watched as reservoirs dried up and the state plunged deeper into a water shortage brought on by the most severe drought in its history. It seemed then completely counterintuitive that Texas would ever need to worry about flooding. Yet that’s exactly what’s happened. Massive flooding in the past few weeks has led Gov. Greg Abbott to declare 37 counties disaster areas. With swelling populations and known flood zones, solid policy is key to disaster recovery – but in states such as Texas and Oklahoma, flooding policy is largely absent.

Photos show South Texas internment camp during WWII. San Antonio writer Jan Jarboe Russell, shown in her Olmos Park living room, spent five years researching and writing her new book “The Train to Crystal City,” about a secret WWII prisoner exchange program at a South Texas family internment camp. Photo: Spencer Selvidge /For The San Antonio Express-News American-born, German schoolchildren at the Crystal City Enemy Detention Facility in the 1940s. Photo: Courtesy Photo. McKinney, Texas — The Message. McKinney, Texas in Black & White There is no plaza in front of the McKinney Police Department — just a crisscross of concrete sidewalks and trampled monkey grass — and it was here, our feet unsteady, that we stood that night. Many voices were returned by the glass and brick facade and the many sounds were one great sound. Texas officials: Schools should teach that slavery was ‘side issue’ to Civil War.

Five million public school students in Texas will begin using new social studies textbooks this fall based on state academic standards that barely address racial segregation. The state’s guidelines for teaching American history also do not mention the Ku Klux Klan or Jim Crow laws. And when it comes to the Civil War, children are supposed to learn that the conflict was caused by “sectionalism, states’ rights and slavery” — written deliberately in that order to telegraph slavery’s secondary role in driving the conflict, according to some members of the state board of education.

Why Is The LGBT Movement Struggling To Uphold A Simple Law In Houston.