Ticket To Work Job Placement. Job Training & Employment for People with Disabilities. The ADA at 25: How One Law Helped Usher in An Age of Accessible Design - Curbed Features. There are 82 stone steps up to the United States Capitol Building in Washington, D.C., a relatively minor bit of trivia for the majority of legislators, tourists, and visitors who traverse them every day. 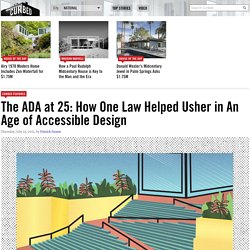 But for those unable to walk up those steps, they're hallowed ground. In 1990, a group of activists and legislators were fighting to pass the Americans with Disabilities Act (ADA), a far-reaching piece of legislation that sought to guarantee equal rights for then roughly 40 million American citizens with disabilities, in part by changing the way architects designed buildings. DisabilityEtiquette.pdf. 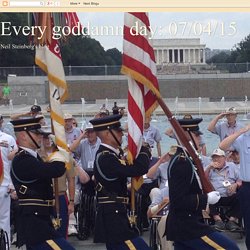 Fake Cover Letters Expose Discrimination Against Disabled. Employers appear to discriminate against well-qualified job candidates who have a disability, researchers at Rutgers and Syracuse universities have concluded. 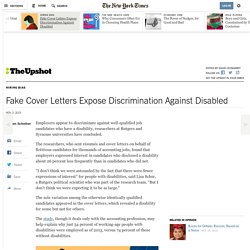 The researchers, who sent résumés and cover letters on behalf of fictitious candidates for thousands of accounting jobs, found that employers expressed interest in candidates who disclosed a disability about 26 percent less frequently than in candidates who did not. “I don’t think we were astounded by the fact that there were fewer expressions of interest” for people with disabilities, said Lisa Schur, a Rutgers political scientist who was part of the research team.

“But I don’t think we were expecting it to be as large.” The sole variation among the otherwise identically qualified candidates appeared in the cover letters, which revealed a disability for some but not for others. Photo. Assistive Technology By People with Disabilities, Part I: Introducing Team Free to Pee by Alice Wong. Logo by Wanda Katja Liebermann. 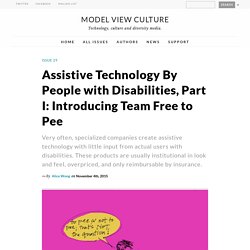 Google.org, United Cerebral Palsy of the North Bay, and Tikkun Olam Makers (TOM) held a makeathon in the SF Bay Area this past September focused on assistive technology for people with disabilities. Each team included people with disabilities, “need knowers,” (i.e., people who need the technology and can share their user experience), and other makers with various technical skills and interests. Featured Philosop-her: Teresa Blankmeyer Burke « Philosop-her. Teresa Blankmeyer Burke is assistant professor of philosophy at Gallaudet University, the world’s only liberal arts college for deaf and hard of hearing people. 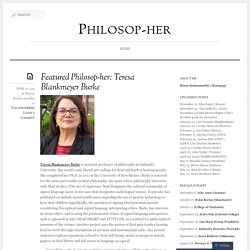 She completed her Ph.D. in 2011 at the University of New Mexico. Burke’s research for the most part resides in deaf philosophy, the space where philosophy intersects with Deaf studies. (The use of uppercase Deaf designates the cultural community of signed language users; lower case deaf designates audiological status). Topics she has published on include moral justification regarding the use of genetic technology to bear deaf children (specifically, the question of signing Deaf potential parents considering this option) and signed language interpreting ethics.

Steven Campbell-Harris on Is it wrong t... The Danish philosopher and theologian Soren Kierkegaard once remarked, ‘if you label me you negate me.’ 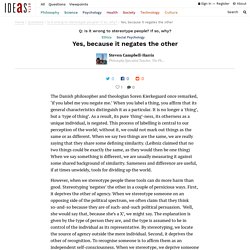 When you label a thing, you affirm that its general characteristics distinguish it as a particular. It is no longer a 'thing’, but a 'type of thing’. As a result, its pure 'thing’-ness, its otherness as a unique individual, is negated. This process of labelling is central to our perception of the world; without it, we could not mark out things as the same or as different. The Troubling Gap Between Awareness of Prejudice and Support for Action - Pacific Standard. The list of names and places synonymous with racially charged acts of police brutality grows longer with each passing month. 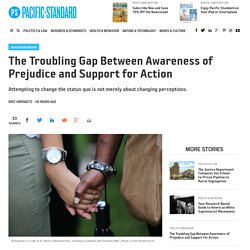 Though perceptions of these events range from "incriminating exemplar" to "amplified distraction," there is a shared question on everybody's mind: Will the responses these events inspire actually produce change? Already, there is some evidence that attitudes are changing. A recent poll by the Public Religion Research Institute found that 39 percent of respondents think the killings of black men by police are merely isolated incidents, a 12 percent decline relative to the results of an ABC/Washington Post poll released last year. These results were largely driven by a shift in opinions among white Americans. Yet there’s a big difference between endorsing a particular view of society and advocating social change. When Prejudice Makes Time Slow Down. There are moments when time seems to slow down for the average person—a first kiss, a tense moment in a baseball game, a job interview. 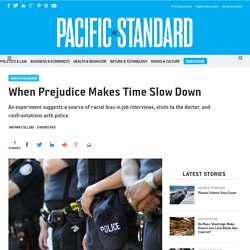 For a cop with his finger on his trigger, that moment can come when aiming at someone who may or may not be reaching for a gun. That's (sort of) the focus of a new study that suggests time slows down a bit when whites look at blacks' faces—if those whites are feeling pressure to compensate for racial bias, that is—with potentially life-and-death consequences. "[I]magine a police officer needing to gauge the time in which a minority suspect must respond before force is exerted," psychologists Gordon Moskowitz, Irmak Okten, and Cynthia Gooch write in Psychological Science.

"The perceived difference of a half second could determine whether shots are fired. " Most Americans harbor racial biases whether they know it or not, likely perpetuated by news coverage of crime. Advertisement — Continue reading below. Multiracial Churches Cater to the White Congregants - Pacific Standard. Americans of different races have long worshipped in different churches, but in the past few years, that's been changing. 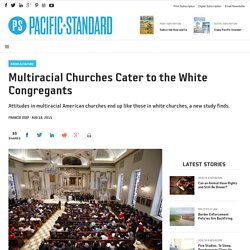 About one in five churchgoing Americans now attend multiracial churches, where no more than 80 percent of the congregation is of any one race. That's almost twice as many as before the turn of the 21st century. Our New Video Series '#RaceAnd' Captures the Essence of Intersectionality. "#RaceAnd" is a special eight-part video series that explores the many ways that race compounds and intersects with all the other issues that impact people of color. 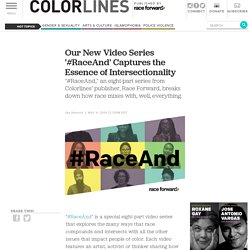 Each video features an artist, activist or thinker sharing how their mix impacts their lives both personally and systemically. As featured subject Kay Ulanday Barrett puts it, we can't truly work toward racial justice if we “see race in a vacuum.” "#RaceAnd" is produced by Kat Lazo, Race Forward's video production specialist. You can watch the first four videos of the series below; the remaining installments will run on Colorlines next week.

On having a black name. My blog name is my grandmother's name, Daisy. My real name is one that would identify me very easily, so I don't use it. But I recently realized that something is missing in my online identity. While reading about The Carnival of Allies (proposed by The Angry Black Woman), I noted that I have never had to pointedly present myself as an ally to black people (not every minority; I specifically refer to black people) because they have usually assumed that I am. Daily.jstor. Originally scheduled with an October release date, Ta-Nehisi Coates’ new book was rushed for an early publication in light of both the terror in Charleston and the timely, urgency of his message. Between the World and Me was just released July 14th and the internet is already a flurry with rave reviews and must-read admonishments from New York Magazine, The New Yorker, and Slate; along with a much-contested critique by Cornel West and wildly white-privilege-fueled op-ed by David Brooks.

Toni Morrison herself endorsed the book, saying, “I’ve been wondering who might fill the intellectual void that plagues me after James Baldwin died. Clearly it is Ta-Nehisi Coates. The High-Salary Trifecta: Gay, Black, and Male. Sociologists are quite familiar with the combination of marginalized identities that can lead to oppression, inequalities, and “double disadvantages.” But can negative stereotypes actually have positive consequences? Financial Juneteenth recently highlighted a study showing that gay black men may have better odds of landing a job and higher salaries than their straight black male colleagues. Led by sociologist David Pedulla, the data come from resumes and a job description evaluated by 231 white individuals selected in a national probability sample. The experiment asked them to suggest starting salaries for the position and answer questions about the fictional prospective employee. To suggest race and sexual orientation, resumes included typically raced names (either “Brad Miller” and “Darnell Jackson”) and listed participation in “Gay Student Advisory Council” half the time.

Black Girls Are Magic Lit Mag. Thesis Book: Shweta Sharma: Design Observer. Artist's Statement These are two process books done during my final year at OCAD that document my thesis process over the course of eight months. The name of the books reflect how I've personally felt throughout my experiences with race, gender and class discrimination. Moyazb — More on the origin of Misogynoir. Venus in Two Acts.

FYMB. Muslim Women Hijab Modesty Choice. What Goes Through Your Mind: On Nice Parties and Casual Racism. "You left your culture at the door" - The Toast. People of color in tech. POCIT. Race ≠ DNA. Illustration by Ken Orvidas The concept of race is the elephant in the collective American living room. Algorithms and Bias: Q. and A. With Cynthia Dwork. Photo. Maiden Names, on the Rise Again. Photo When Donna Suh married in September, wearing a short white dress at San Francisco City Hall, she decided to keep her last name. Readers’ Turn: The Nuisances of a Marriage Name Decision.

Breaking The Glass Ceiling Is Permanently Damaging To Your Health. Intersectional Types Mailing List. The myth that women secretly hate other women has a long history. Do You Follow? Art in Circulation 3 (transcript) Strange Horizons Articles: Stories, Culture, and Conversation: An Interview with Roshani Chokshi and Yukimi Ogawa, by Catherine Krahe. The Bookland Reeve (So here’s what you can do: Like/reblog/share...) Women in Dark Times. The Mother of All Questions, by Rebecca Solnit. Fuck Yeah Women Film Directors. The Fragile Ears of Men. The Shoes Under the Art World. The MRA Mirror. A lesson for men's rights activists on real oppression - The Drum. Honey Badgers Women in the Men's Rights Movement. Internet freedom and the EFF’s anti-harassment statement.