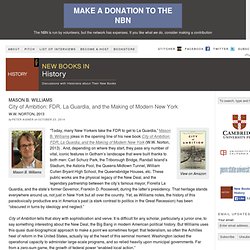 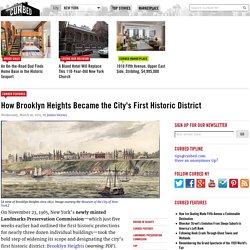 While the neighborhood's claim to being America's original suburb (and home to over six hundred historic buildings) made it the perfect candidate for landmarking, its selection had taken a tremendous amount of lobbying from within the community. Just two decades earlier, Brooklyn Heights had been seen as a backwater, whose dilapidated housing stock was ripe for redevelopment and—in the case of the original plans for the BQE and Cadman Plaza—total destruction. The area we know as Brooklyn Heights today was originally a Native American settlement, probably called Ihpetonga (though all Western labels for pre-contact settlements should be met with skepticism). 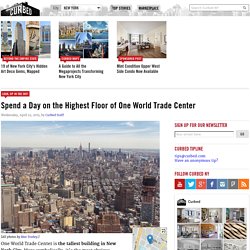 More symbolically, it's the most obvious physical marker of downtown's fraught, complex redevelopment. The 1,776-foot-tall tower opened in November to much fanfare; at the moment, Conde Nast and other tenants occupy the lower floors. But on April 1, Servcorp, a company that sets up and then leases out luxury office space by the month to high-flying business types, opened its New York flagship on the 85th floor. Though offices will go up to 90—and One World Observatory will occupy the 100th, 101st, and 102nd stories when it opens in May—right now Servcorp occupies the highest point in the building you can go without wearing a hard hat.

The Vanishing City by Alex Traub. The Rockettes, when they first became famous, were called the Roxyettes. 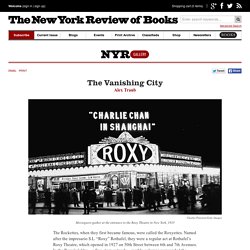 Named after the impresario S.L. “Roxy” Rothafel, they were a regular act at Rothafel’s Roxy Theatre, which opened in 1927 on 50th Street between 6th and 7th Avenues. In the Roxy’s lobby—a five-story rotunda—marble columns surrounded the world’s largest oval rug. The main theater had nearly 6,000 seats. On opening night, Rothafel projected onto the cinema screen letters of congratulation from President Calvin Coolidge and the mayor of New York, Jimmy Walker. In 1960, the Roxy was unceremoniously razed to make way for an office building. Today in New York there are more than 1,300 individual landmarks, and 114 historic districts encompassing some 33,000 landmarked properties.

Yet prior to the landmarks law there was no legal means for protecting historic sites like the Roxy. The exhibition catalog goes further. Robert Moses: The Master Builder of New York City. Dimensions: 200 x 270mm | Extent: 112pp | Colours: CMYK | Format: Hardback | A new graphic biography by Pierre Christin and Olivier Balez recounts the achievements of one man who changed the the face of an entire city. 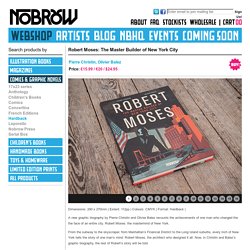 Robert Moses: the mastermind of New York. From the subway to the skyscraper, from Manhattan’s Financial District to the Long Island suburbs, every inch of New York tells the story of one man’s mind: Robert Moses, the architect who designed it all. Now, in Christin and Balez’s graphic biography, the rest of Robert’s story will be told. Pierre Christin was born at Saint-Mandé in 1938. New York: Conspicuous Construction by Martin Filler. Sky High and the Logic of Luxury an exhibition at the Skyscraper Museum, New York City, October 9, 2013–June 15, 2014 From the pre-Revolutionary period until World War II, tenants in New York City were uniformly given three months’ notice of annual rent increases on February 1 (known as Rent Day). 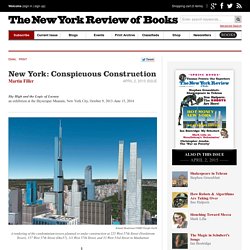 Many then sought cheaper deals, and when all leases expired on May 1 (called Moving Day) as many as a million residents changed houses in what amounted to a single mass migration. Lately there’s been another, more specialized real estate frenzy afoot in America’s largest city. Its most visible manifestations concern the world’s very richest people. Last December a long-anticipated threshold was crossed when a duplex penthouse atop the French architect Christian de Portzamparc’s new One57 condominium, on Manhattan’s West 57th Street between Sixth and Seventh Avenues, sold for an unprecedented $100,471,452.77. 497 Dean St. Brooklyn, N.Y. - New York City then & now: Famous Daily News photos brought back to life. Changing New York, 1935-1938 - an album on Flickr. Daily Overview. Love Letter to New York: Classic LIFE Photos of the Big Apple. Over the years, LIFE magazine's photographers explored every corner of New York, the city the magazine always called its home. 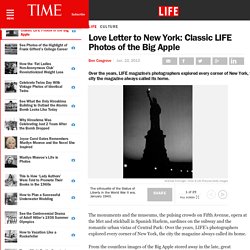 Love Letter to New York: Classic LIFE Photos of the Big Apple Andreas Feininger—Time & Life Pictures/Getty Images. Narratively. ‘Empty New York’, A Series of Photos of New York City in 1964 Taken When No One Was Around. How Danny Lyon spent New Year's Eve 1966. We've probably all spent a good portion of New Year's Eve on the subway, is a desperate dash to try and take in every last one of the parties we've been invited to. 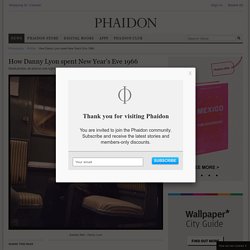 For Danny Lyon though - who spent the entirety of New Year's Eve 1966 travelling the tube - the journey itself was the destination. Danny emailed us the other day to tell about the series of photos he took that evening. They go on show this week - where else, but on the subway itself. Subway Two Boys - Danny Lyon "These 8 1966 Rollieflex chromes are going to be on very large light boxes inside the Atlantic Avenue station in Brooklyn, for a year," Danny told us.

Subway Train - Danny Lyon The exhibition laid out over 4 by 5 feet light boxes and will be displayed for one year inside the Atlantic Ave Station in Brooklyn. Subway - Danny Lyon Danny tells us he made the original chromes in 1966 using a Rollieflex. Meet Flo Fox, the Blind Photographer Who's Chronicled New York City for 40 Years - In Focus.

Welcome to In Focus, a feature where writer Hannah Frishberg profiles some of the great street photographers of New York City's past and present. 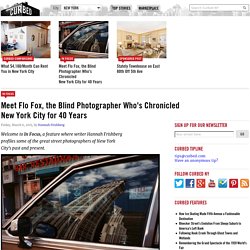 Flo Fox is legally blind, yet she has shot over 120,000 images and counting. "I'd like to prove that even though I'm a total cripple, I can still take fantastic photos," Fox says of her continuously growing portfolio. Diagnosed with multiple sclerosis at age 30, Fox, now 69 and completely paralyzed, still takes her camera with her everywhere, having attendants, friends, and strangers take photos for her with an autofocus camera.

America in the 1970s: New York City - In Focus. Today marks the start of Documerica Week on In Focus -- a new photo essay each day, featuring regions of the U.S. covered by the photographers of the Documerica Project in the early 1970s. 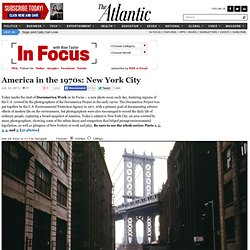 The Documerica Project was put together by the U.S. Environmental Protection Agency in 1971, with a primary goal of documenting adverse effects of modern life on the environment, but photographers were also encouraged to record the daily life of ordinary people, capturing a broad snapshot of America. Today's subject is New York City, an area covered by many photographers, showing some of the urban decay and congestion that helped prompt environmental legislation, as well as glimpses of New Yorkers at work and play. Be sure to see the whole series: Parts 1, 2, 3, 4, and 5. [30 photos] Use j/k keys or ←/→ to navigate Choose: Pictures of Daily Life of the New York Police Department in the 1970's.

Fascinating Photos of New York City in the Early 1980s. New York Up & Down is a fascinating series by now octogenarian Frank Horvat that shows us what a major metropolis looked like back in the early 1980s. Shot between 1982 and 1986, the street images, all taken with a Nikon SLR camera with Ektachrome, captures New York City in a raw and gritty way. Like a relationship, it's an experience Hovat describes as "romantic. " "New York as a city has always been ‘romantic,’ because I have always associated it with some emotional involvement (or rather, as the decades passed, with a series of involvements)," he states. Rare Photos of NYC's Gritty Subway Conditions in 1981. In the 1980s, the New York City subway was a gritty center for gangs and crime. The trains were covered with graffiti and being a passenger alone late at night was not recommended.

But, in 1981, fearless young photographer Christopher Morris wasn't deterred by the frequent violence and harsh conditions. Only 22-years-old at the time, Morris was working as an intern at photo agency Black Star and was determined to make something of himself as a photographer. So, without hesitation, he ventured underground to document the NYC experiences through his lens. Stephen Shames documents the gritty reality of life in the Bronx. If the photographs in Stephen Shames’ series Bronx Boys don’t seem to sit comfortably alongside the funny, shareable, imagined-one-day-and-shot-the next photographic projects which we are so accustomed to seeing on the internet, then that’s because they don’t. Rather, Bronx Boys is the product of 23 years spent photographing a group of people living in the Bronx, New York City, and the photographs were taken not to garner likes or shares, but to publicise the plight of one of the poorest areas in NYC.

It’s not the first time Stephen Shames has undertaken such a task; now in his late 60s, the photographer has spent much of his long career working to raise awareness of social issues, with a particular focus on youth and poverty. As he told me in our interview, his aim is “to give a voice to the aspirations of young people struggling to survive in poor, neglected corners of the world,” and it is without a doubt one he has fulfilled. Insightful photographs of New York City's squat communities in the 1990s. New York City in the early 1990s was dramatically different to how we know it now, if Ash Thayer’s new book Kill City is anything to go by.

The Lower East Side was overrun with derelict buildings and dingy corners, and having been kicked out of her Brooklyn apartment Ash came across a welcoming community at a squat called See Skwat. As publisher PowerHouse explains, in that era “squatters took over entire buildings, but these structures were barely habitable. They were overrun with vermin, lacking plumbing, electricity, and even walls, floors, and a roof. Punks and outcasts joined the squatter movement and tackled an epic rebuilding project to create homes for themselves.” Ash kept her camera at hand throughout her time living in one squat or another in the 90s, photographing her fellow residents as they learnt crafts and sourced materials from NYC’s endless rubbish. Kill City is available from PowerHouse Books. Ash Thayer: Kill City: Beer Olympics I Ash Thayer: Kill City: Jason. The Truth About New York’s Legendary 'Mole People' The mouth of the tunnel is wide and dark, swallowing the light and all that breathes.

Rubble is scattered along the train tracks, bordered by retaining walls covered in numerous layers of graffiti. This is where it all started. Robert Herman Photography - NYC Street Photography. New York's Fearless Bridge-Climber Recalls Highs and Lows - In Focus. Times Square: The City’s Id, Now and Always. Times Square in the de Blasio era.

Photograph by Dina Litovsky. New York City Transit Authority Graphics Standards Manual. Motorcycle Graveyard, Lockport NY - dc Classic Cycles. Text and pictures by David Cuff In April 2010 pictures popped up on someone’s flickr account showing a bunch of motorcycles abandoned in a warehouse. Internet rumors and guesses as to where the building was located flooded the motorcycle blogs. At some point the location was discovered or someone told. The topic showed up on a local sport bike forum I read and I was hooked. HartIslandProject.