John Higginson, "Collective Violence and the Agrarian Origins of South African Apartheid, 1900-1948" ( John Higginson View on Amazon John Higginson, professor of history at the University of Massachusetts at Amherst, is an acclaimed authority on South Africa and comparative labor politics, his two main fields of interest. 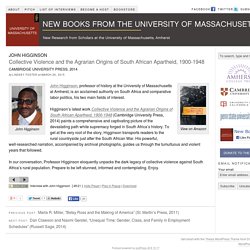 Higginson’s latest work Collective Violence and the Agrarian Origins of South African Apartheid, 1900-1948 (Cambridge University Press, 2014) paints a comprehensive and captivating picture of the devastating path white supremacy forged in South Africa’s history. Jerry F. Hough and Robin Grier, "The Long Process of Development" (Cambridge UP, 2014) View on Amazon According to a popular saying, "Nothing succeeds like success. 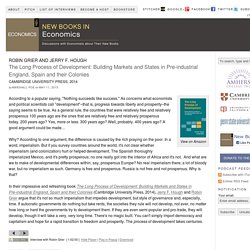 Why? In their impressive and refreshing book The Long Process of Development: Building Markets and States in Pre-industrial England, Spain and their Colonies (Cambridge University Press, 2014), Jerry F. Deborah Cowen, "The Deadly Life of Logistics" (University of Minnesota Press, 2014) Elizabeth Maddock Dillon, "New World Drama: The Performative Commons in the Atlantic World, 1649-1849" (Duke UP, 2014) Andrew Needham, "Power Lines: Phoenix and the Making of the Modern Southwest" (Princeton UP, 2014) Andrew Needham View on Amazon Last month, VICE NEWS released a short documentary about the Navajo Nation called "Cursed by Coal. 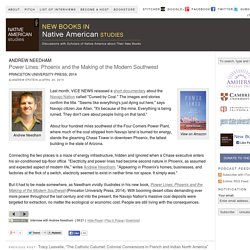 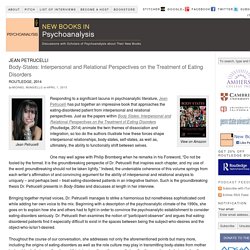 Ed Conway, "The Summit: Bretton Woods, 1944" (Pegasus Books, 2014) Ed Conway View on Amazon The functioning of the global economy remains as relevant a topic as ever before. 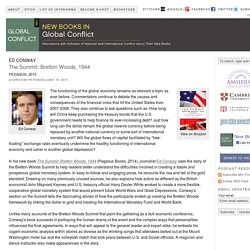 Commentators continue to debate the causes and consequences of the financial crisis that hit the United States from 2007-2008. They also continue to ask questions such as: How long will China keep purchasing the treasury bonds that the U.S. government needs to help finance its ever-increasing debt? Just how long can the dollar remain the global reserve currency before being replaced by another national currency or some sort of international monetary unit? Kevin M. Schultz, "Buckley and Mailer: The Difficult Friendship that Shaped the Sixties" (W. W. Norton, 2015) Meryle Secrest, "Elsa Schiaparelli: A Biography" (Knopf, 2014) View on Amazon As Meryle Secrest notes in the introduction to her new book, Elsa Schiaparelli: A Biography (Knopf, 2014), "The most extraordinary fashion designer of the twentieth century is now just a name on a perfume bottle. 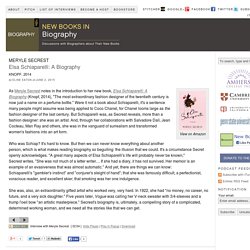 " Were it not a book about Schiaparelli, it's a sentence many people might assume was being applied to Coco Chanel, for Chanel looms large as the fashion designer of the last century. But Schiaparelli was, as Secrest reveals, more than a fashion designer: she was an artist. Jade Beall Photography. Ken Liu, "The Grace of Kings" (Saga Press, 2015) Ken Liu View on Amazon Short story writing, novel writing, and translating require a variety of skills and strengths that are hardly ever found in a single person. 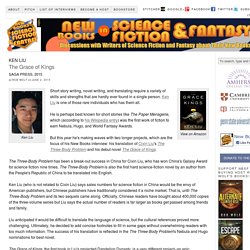 Ken Liu is one of those rare individuals who has them all. He is perhaps best known for short stories like The Paper Menagerie, which (according to his Wikipedia entry) was the first work of fiction to earn Nebula, Hugo, and World Fantasy Awards. But this year he's making waves with two longer projects, which are the focus of his New Books interview: his translation of Cixin Liu's The Three-Body Problem and his debut novel The Grace of Kings. The Three-Body Problem has been a break-out success in China for Cixin Liu, who has won China's Galaxy Award for science fiction nine times.

Ken Liu (who is not related to Cixin Liu) says sales numbers for science fiction in China would be the envy of American publishers, but Chinese publishers have traditionally considered it a niche market. Meg Elison, "The Book of the Unnamed Midwife" (Sybaritic Press, 2014) Meg Elison View on Amazon Despite the odds, Meg Elison did it. 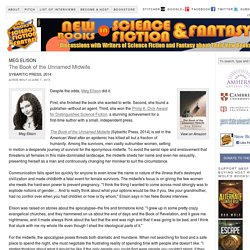 First, she finished the book she wanted to write. Second, she found a publisher–without an agent. Ferrett Steinmetz, "Flex" (Angry Robot 2015) Ferrett Steinmetz View on Amazon Ferrett Steinmetz first built an audience as a blogger, penning provocative essays about "puns, politics and polyamory" (among other things) with titles like "Dear Daughter: I Hope You Have Awesome Sex" and "How Kids React To My Pretty Princess Nails. 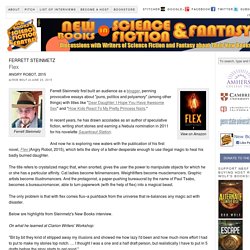 " In recent years, he has drawn accolades as an author of speculative fiction, writing short stories and earning a Nebula nomination in 2011 for his novelette Sauerkraut Station. Geraldo L. Cadava, "Standing on Common Ground: The Making of a Sunbelt Borderland" (Harvard UP, 2013) Ana Elizabeth Rosas, "Abrazando el Espíritu: Bracero Families Confront the U.S.-Mexico Border" (U of California Press, 2014) Ana Elizabeth Rosas View on Amazon The Emergency Farm Labor Program (a.k.a. 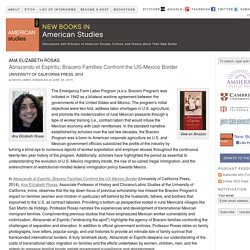 Bracero Program) was initiated in 1942 as a bilateral wartime agreement between the governments of the United States and Mexico. The program's initial objectives were two-fold, address labor shortages in U.S. agriculture, and promote the modernization of rural Mexican peasants through a type of worker training (i.e., contract labor) that would infuse the Mexican economy with cash remittances. In the standard narrative established by scholars over the last few decades, the Bracero Program was a boon to American corporate agriculture as U.S. and Mexican government officials subsidized the profits of the industry by turning a blind eye to numerous reports of worker exploitation and employer abuses throughout the continuous twenty-two year history of the program.

Christina Dunbar-Hester View on Amazon For the past few decades a major focus has been how the Internet, and Internet associated new media, allows for greater social and political participation globally. There is no disputing that the Internet has allowed for more participation, but the medium carries an inherent elitism and the need for expertise, which may limit accessibility. According to some advocates, old media like radio offer an alternative without the limitations of new media systems.

Ebrahim Moosa, "What is a Madrasa?" (U of North Carolina Press, 2015) Thom van Dooren, "Flight Ways: Life and Loss at the Edge of Extinction" (Columbia UP, 2014) Images trouvées. Haile Selassie and the United States of America. By the end of the Ethiopian and Italian war (1935-41), the Ethiopian economy was entirely exhausted and its natural resources plundered. Adding to the existing agony was the so-called “protected state” imposed on Ethiopia, by Winston Churchill.

When it became apparent that the relationship between Ethiopia and Britain was leading to a deeper financial crisis, the Emperor Haile Selassie sought economic assistance from the new emerging global power, the USA. ኢትዮጵያ ‘Ethiopia’, King Haile Selassie’s visit to USA and American and Ethiopian development corporations. Published by the United States information services 1954. (BL ORB 30/ 7909) Avidly / Playing Hell in Charleston. Daniel Payne, Clementa Pinckney and the fight against White Supremacy The men and women massacred while studying the Bible the other night in the Emanuel A.

M. E. Church were, in their own way, raising hell. That phrase might seem ill conceived or even disrespectful but it can be invoked here to honor their courage and the A. Daniel Payne was a young free man of color in Charleston who quietly started a school with three free black children during the day and, even more quietly, with three enslaved adults in the evening. Payne sought to teach the natural sciences and encouraged children to collect and dissect small creatures under his guidance.

FIRST IN THE FORCE. Sally Cabot Gunning, "Satucket Trilogy" (William Morrow, 2011) Pacific Strife: The Great Powers and their Political and Economic Rivalries in Asia and the Western Pacific 1870-1914, van Dijk. Torild Skard, "Women of Power" (Policy Press, 2015) Torild Skard View on Amazon Torild Skard is the author of Women of Power: Half a Century of Female Presidents and Prime Ministers Worldwide (Policy Press, 2015). Skard is a senior researcher in women's studies at the Norwegian Institute of International Affairs in Oslo and is a former member of parliament and the first woman president of the Norwegian Upper House, among many other appointments.

Skard takes on an enormously ambitious project in her recent book. Archived Miscellany. Archived Miscellany. Nick Sousanis, "Unflattening" (Harvard UP, 2015) Mightier Than The Scepter. Royal Ardor. In debating with myself the contents of your letters, I have been put to a great agony, not knowing how to understand them, whether to my disadvantage as shown in some places, or to my advantage as in others. I beseech you now with all my heart definitely to let me know your whole mind as to the love between us.

From a letter to Anne Boleyn. Henry VIII in 1509 married his dead brother’s wife Catherine of Aragon, whose seven pregnancies failed to produce for him a male heir. Her Majesty's Rat-Catcher. Each great civilization is plagued by its own particular infestation—the point at which the balance between man and vermin shifts uncomfortably in the direction of the critters. Biblical Egypt had its plague of locusts, modern New York City is terrorized by bedbugs, and Victorian London had a serious rat problem. Rats scurried around the city chewing up food, clogging up drains, passing around diseases, and frightening ladies. The task of reining in the rodents fell to village farmers (desperate to save the gnawed legs of their livestock) and rat vigilantes who killed for commission or provided rats for popular dog and rat matches.

And then there was the rat’s most notorious enemy: Jack Black, Rat-Catcher to Her Majesty The Queen.