History of United States of America - in Depth - Continued 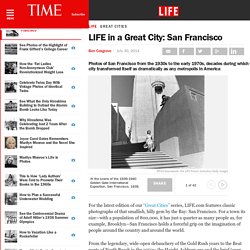 The Most Diverse Cities Are Often The Most Segregated. When I was a freshman at the University of Chicago in 1996, I heard the same thing again and again: Do not leave the boundaries of Hyde Park. 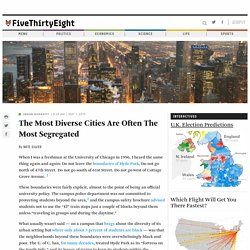 Do not go north of 47th Street. Do not go south of 61st Street. Do not go west of Cottage Grove Avenue. These boundaries were fairly explicit, almost to the point of being an official university policy. The Cost of Child Poverty by Jeff Madrick. Among the many forces contributing to the recent epidemic of tension between police and mostly black urban communities, from Ferguson to Cleveland to Baltimore, one in particular has been all too little acknowledged: America’s child poverty crisis. 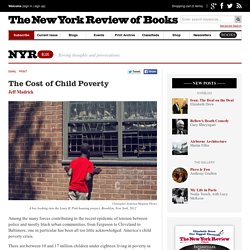 There are between 10 and 17 million children under eighteen living in poverty in America today, depending on how you measure it. If we take the measure most often used in international comparisons, up to 20 percent of the young population—one in five children—is poor. This is a far higher proportion than in any other developed country except Romania, according to a 2012 study of thirty-five developed nations by UNICEF. Worse, nearly one in two blacks is born into poverty in the US. 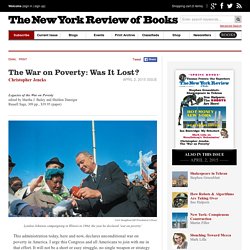 Bailey and Sheldon Danziger Russell Sage, 309 pp., $39.95 (paper) Hasia Diner, “Roads Taken: The Great Jewish Migrations to the New World and the Peddlers Who Forged the Way” (Yale University Press, 2015). Hasia Diner View on Amazon The period from the late eighteenth to the early twentieth centuries witnessed a mass migration which carried millions of Jews from central and eastern Europe, north Africa, and the Ottoman Empire to new lands. 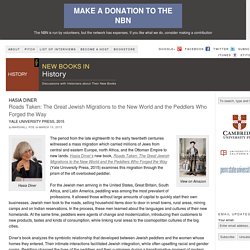 Hasia Diner’s new book, Roads Taken: The Great Jewish Migrations to the New World and the Peddlers Who Forged the Way (Yale University Press, 2015) examines this migration through the prism of the oft overlooked peddler. Fit for Citizenship? A Photo Essay. When America was starting to define itself as a “nation of immigrants,” it sought a more perfect union by engineering the masses at its gateway. 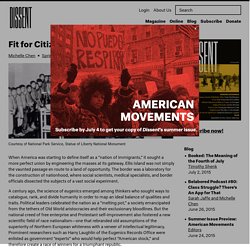 Ellis Island was not simply the vaunted passage en route to a land of opportunity. The border was a laboratory for the construction of nationhood, where social scientists, medical specialists, and border officials dissected the subjects of a vast social experiment. A century ago, the science of eugenics emerged among thinkers who sought ways to catalogue, rank, and divide humanity in order to map an ideal balance of qualities and traits.

Political leaders celebrated the nation as a “melting pot,” a society emancipated from the tethers of Old World aristocracies and their exclusionary bloodlines. The social tensions and anxieties produced by immigration seemed both to collapse old hierarchies and to erect new ones. So social reformers and scientists began to construct programs to exclude and expel undesirables from American soil. The Italian Americans PBS Documentary Series - Home. Common People: In Pursuit of My Ancestors, Light. The Irish Question. By 1865, one out of every four New Yorkers had come from Ireland, and New York was widely recognized as being one of the most Irish cities in the world. 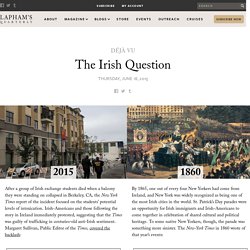 St. Patrick’s Day parades were an opportunity for Irish immigrants and Irish-Americans to come together in celebration of shared cultural and political heritage. VOCES “Children of Giant” - an album on Flickr. Children of Giant - Full Episode. A personalized PBS video experience is only a few clicks away. 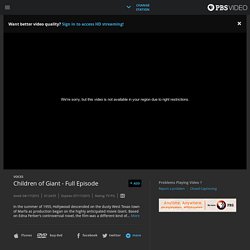 Use one of the services below to sign-in to PBS, and you'll be able to manage videos in your Watchlist, keep track of your favorite shows, watch PBS in high definition, and much more! You've just tried to add this video to your Watchlist so you can watch it later. Acknowledging & Apologizing for the Overthrow of. Pure Hawaiian. In the islands where surfing began, the waves on that particular day were a disappointment—mushy, chest high, and annoyingly infrequent. 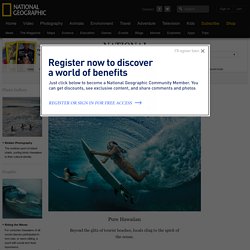 Still, Hawaiians have never needed much of an excuse to grab a board and hit the ocean, and the takeoff zone was packed. Teens on shortboards. Moms on longboards. Grade-schoolers on bodyboards. Alaska Through New Eyes by Ian Frazier. In 1886 Alaska had been American for less than two decades, Russian presence had waned, and the whaling industry widely occupied the region. 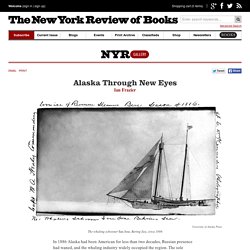 The sole representative of American authority in those waters was the US Revenue Cutter Bear, a 198-foot, reinforced-hull vessel powered by both steam and sail. The ship’s mission was to confiscate illegal alcohol and guns, make observations for nautical charts, offer medical assistance to natives and ships’ crews, pick up explorers from an earlier US Navy expedition, and generally police the area. Exploring and Mapping Alaska: The Russian America Era, 1741-1867, Postnikov, Falk, Black. Christian Appy, “American Reckoning: The Vietnam War and Our National Identity” (Viking, 2015) Christian Appy View on Amazon As the younger generation replaces the old, the wounds our nation felt during the immediate years after the Vietnam war are slowly healing. Author, Christian Appy argues that perhaps the Vietnam War is more present in every day politics than the nation is willing to admit. Making the Memorial by Maya Lin. It’s taken me years to be able to discuss the making of the Vietnam Veterans Memorial, partly because I needed to move past it and partly because I had forgotten the process of getting it built.

I would not discuss the controversy surrounding its construction and it wasn’t until I saw the documentary Maya Lin: A Strong Clear Vision that I was able to remember that time in my life. But I wrote the body of this essay just as the memorial was being completed—in the fall of 1982. Then I put it away…until now. DocsTeach: Documents. Your Research-Based Guide to American White Supremacist Movements - Pacific Standard. Although the focus often falls on jihadist terrorists, since 9/11, more people have been killed on American soil by right-wing terrorists than by Muslim ones, according to a recent New York Times report.

Case in point: The killer who gunned down nine members of the Emanuel A.M.E. Church in Charleston, South Carolina, is a white supremacist, and is likely to face federal charges for a hate crime. Over the past decade, sociologists have collected a lot of data about white supremacists and other American extreme right-wing movements, which present a danger to all Americans. Such movements "openly and virulently embrace racism, anti-Semitism, and/or xenophobia and promote violence," University of Pittsburgh sociologists Kathleen Blee and Kimberly Creasap wrote in the Annual Review of Sociology in 2010. First Ladies-in-Waiting. At an Iowa campaign stop in August, President Barack Obama, speaking of his beloved family, modestly placed himself at the bottom of the Obama household roster: “I don’t usually like to follow her as a speaker,” he said of his wife Michelle, “because, let’s face it, on the charisma ratings in my household, you have her, the girls, Bo, and then, and then my mother-in-law and then me.”

Obama’s bowing to his wife’s popularity was more than just lip service. The First Lady’s every move is watched by both the political and celebrity press; her conversation skills are cited as key to the President’s hosting of foreign dignitaries, and countless blogs devoted to her sartorial choices parse the underlying meaning of cardigan versus jacket at public appearances. The First Lady—whose title is widely acknowledged as having been initially bestowed upon Lucy Webb Hayes, wife of Rutherford B. Lincoln’s War of Words by Ted Widmer. In 1938, Franklin D. Roosevelt spoke to an encampment of grizzled Civil War veterans who had returned to Gettysburg for the seventy-fifth anniversary of the battle. “It seldom helps to wonder how a statesman of one generation would surmount the crisis of another,” he warned. But then he did just that, using Lincoln’s language to inspire a new generation of Americans “to preserve under the changing conditions of each generation a people’s government for the people’s good.”

'Purchased Lives: New Orleans and the Domestic Slave Trade, 1808–1865' “Purchased Lives” is a valuable new exhibition about the domestic slave trade, with an emphasis on the city that was once home to America’s largest slave market. Colonel Ty Seidule, "West Point History of the Civil War" (Simon and Schuster, 2014) Eve of Battle. My dear Cousin Vira, From a letter to Elvira Stone. Barton composed this letter at a Union Army division headquarters on December 11.

Later that day she was tending to wounded brought back from the front when she received a message from a surgeon across the Rappahannock River saying, “Come to me—your place is here.” She crossed a bridge amid heavy fire, her skirt torn by shells; it was the closest she came to death during the war. 101 Interesting Facts about the Civil War. Beyond Redemption: Race, Violence, and the American South after the Civil War, Emberton.

What Life Was Really Like for “Southern Belles” During the Civil War. Modern-day debate over the Confederacy centers on the dangerous myths upheld by things like the Confederate battle flag, which is used both as a racist symbol and a beacon of a “simpler” Southern society by its proponents today. So…what was life really like for Southern belles before and during the war? David Jay Portfolios. Permalink The Unknown Soldier | 20 Images © Copyright David Jay. FolioLink™ © ISProductions 2015 BioContact Guestbook David Jay. Daddy Doll. National Geographic. Bedrooms of the Fallen, Gilbertson, Gourevitch. 'Back Home': Female veterans often find unwelcoming system, insensitive treatment.

Editor’s note: This report is part of a project on post-9/11 veterans in America produced by the Carnegie-Knight News21 program. Sixth in a series of articles. Human Costs of the Forever Wars, Enough to Fill a Bookshelf. Photo. America's Troops: 45 Things They Wish You Knew. Joe Pugliese/August/Texas Monthly. The Erasures of “Thank you for your service” Here in the US, it’s Veteran’s Day (in Canada it’s Remembrance Day, in England it’s Armistice Day, and it’s worth thinking about what those differences mean). The utterance you’re most likely to hear is “thank you for your service.” As an anthropologist who works with injured soldiers and their families, that has become one of my least favorite utterances (I’m hardly alone).

This year, thanks to a provocation from my new institutional home, I find myself particularly committed to getting us to think about the experiences, and the violence, that well meaning platitude erases. The Reporter Resists His Government by Steve Coll. The Marshall Project. No-Man’s-Land. Robert P. Burns, “Kafka’s Law: ‘The Trial’ and American Criminal Justice” (U of Chicago Press, 2014)