Countries, Nations, and Regions Across the World Continued

Forbes Welcome. Population.io. Inside the United Nations. When you arrive at the U.N. headquarters it’s like you’re in a different country. 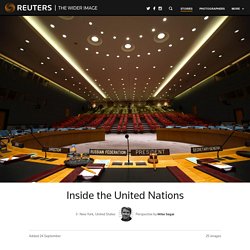 The usual rules of New York don’t apply. I’ve always been fascinated by the building. The Time Zone Converter. Sarah S. Bush, "The Taming of Democracy Assistance: Why Democracy Promotion Does Not Confront Dictators" (Cambridge UP, 2015) Sarah S. 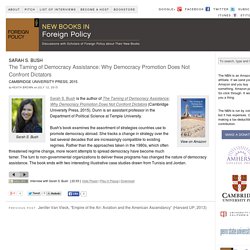 Bush View on Amazon Sarah S. Ada Ferrer, "Freedom's Mirror: Cuba and Haiti in the Age of Revolution" (Cambridge UP, 2015) Faith and tradition in Cuba. The air was choked with smoke from incense and cigars while the faithful sipped sugarcane liquor from a gourd at the altar and spat mist over the crowd. 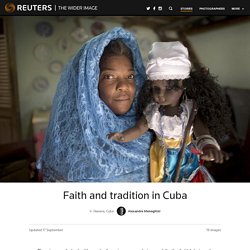 MAKERS Canada. Fort McMoney. Rebecca Earle, "The Body of the Conquistador" (Cambridge UP, 2012) Kevin O'Neill, "Secure the Soul: Christian Piety and Gang Prevention in Guatemala" (U of California Press, 2015) Barbara Weinstein, "The Color of Modernity: Sao Paulo and the Making of Race and Nation in Brazil" (Duke UP, 2015) Barbara Weinstein View on Amazon Brazilian society is rife with inequality. 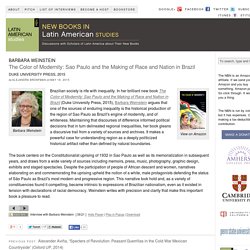 Alejandro Velasco, "Barrio Rising: Urban Popular Politics and the Making of Modern Venezuela" (U of California Press, 2015) Alejandro Velasco View on Amazon In the mid-1950s, Venezuela's military government razed a massive slum settlement in the heart of Carácas and replaced it with what was at the time one of Latin America's largest public housing projects. 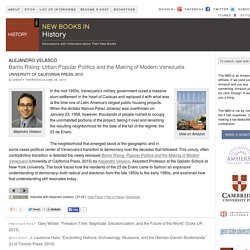 When the dictator Marcos Pérez Jiménez was overthrown on January 23, 1958, however, thousands of people rushed to occupy the uninhabited portions of the project, taking it over and renaming the resulting neighborhood for the date of the fall of the regime: the 23 de Enero.  MUSEO DE LA PALABRA. Prudencia Ayala (1885-1936) Precursora de los derechos femeninos en El Salvador. 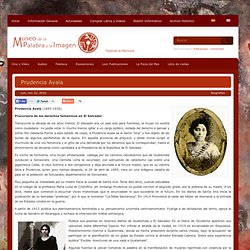 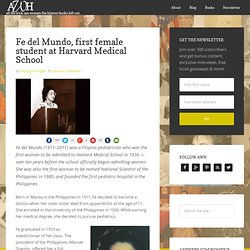 She was also the first woman to be named National Scientist of the Philippines in 1980, and founded the first pediatric hospital in the Philippines. Born in Manila in the Philippines in 1911, Fe decided to become a doctor when her older sister died from appendicitis at the age of 11. She enrolled in the University of the Philippines in 1926. While earning her medical degree, she decided to pursue pediatrics. Fe graduated in 1933 as valedictorian of her class. La viuda (The Widow) by painter Magdalena Mira. ... The Courtly Art of the Ancient Maya - Lady Xoc (Lintels 24, 25, and 26) Bloodletting Ritual of Lady Xoc (Lintel 24), Lady Xoc Conjuring a Large Serpent(Lintel 25), Shield Jaguar, Lady Xoc, and Jaguar Headdress (Lintel 26), Structure 23 Yaxchilan, Chiapas, Mexico, c. 725 Courtesy of the Trustees of The British Museum © Justin Kerr In royal Maya courts, women filled important civic and religious roles denied them in many Mesoamerican cultures. 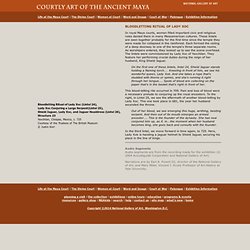 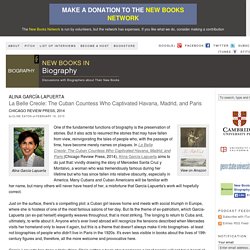 Lush Life: The Music of Brazil's Doris Monteiro. Like a hot breath of summer, Doris Monteiro’s Agora opens with the sultry rhythms of a most startling number, “Maitá”. 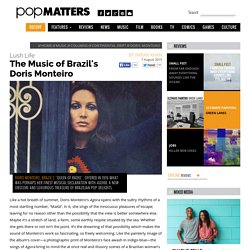 In it, she sings of the innocuous pleasures of escape; leaving for no reason other than the possibility that the view is better somewhere else. Maybe it’s a stretch of land, a farm, some earthly respite situated by the sea. Whether she gets there or not isn’t the point. Juan nieves. ...e uma pitada de ócio. - Great Brazilian Books (part 2) Ballet in Brazil's 'Crackland' On the outskirts of Sao Paulo in Brazil, the rough Luz neighbourhood - known as Cracolandia or "Crackland" locally for its widespread use of crack cocaine – might seem a world away from the beauty and grace usually associated with ballet.

But there’s another side to life in Luz, in a country that’s among the world's biggest consumers of crack cocaine. Young girls get in a minibus, sometimes with people sleeping on the streets around them, and travel to the New Dreams dance studio, where they don pointe shoes, tights and tutus to take ballet classes. For the young girls learning to jump, plie and pirouette, the studio aims to introduce them to the discipline and rewards of ballet. And for those who show particular promise, perhaps even a way out of the difficult environment that surrounds them. “We give them love and affection.” In 'Tea Time', 60 Years of Illusions and Pretense Are Pleasantly Lost. Maite Alberdi Alicia, Gema, Angelica, Ximena, María Teresa Muñoz (ITVS)PBS: 27 Jul 20152014 “In a family, the father and mother have different obligations.”

Alicia is reading from her Home Economics notebook, dating back some 60 years. She wears a pink plaid suit and pearls, the table before her and her four friends set with silver and china. The camera cuts from its close-up on Alicia’s face to María’s, who tips her head back and sighs, her hands clasped as if in prayer. Julie Billaud, "Kabul Carnival: Gender Politics in Postwar Afghanistan" (U of Pennsylvania Press, 2015)

Cats in Persian manuscripts. Telegraphs and Typewriters: The Impact of Technology on Bookkeeping at Bushire. Although typewriters helped standardise the way in which letters were presented (for which archivists, as palaeographers, have been eternally grateful ever since), they did not change how letters were dispatched. Hong Kong’s Oligarchy. Three months after the police shut down the pro-democracy movement that made headlines last fall, a new wave of protests crested in parts of Hong Kong. The protests were smaller in scale, much less representative of the Umbrella Movement’s many voices, and angrier, erupting in shopping streets and malls near the Chinese border in February and March. Their grievances weren’t with the mechanics of voting, but with so-called “parallel traders” from the mainland who have been sweeping tax-free products such as baby formula off the shelves in Hong Kong and reselling them across the border for profit.

Crowded Hong Kong has little space for the dead. HONG KONG – In tightly packed Hong Kong, the dead are causing a problem for the living. After Chui Yuen-sing’s mother died in April, she was cremated and her ashes were put in storage while he tried to find a final resting place. He was willing to wait up to 18 months for a pigeonhole-like “niche” in a memorial building. If none was available, he was considering putting them in mainland China, where his father’s ashes are already stored, or taking an even more drastic step that conflicted with Chinese tradition.

“Maybe I would have scattered my mom’s ashes in a public park,” the retired university lecturer said. “But if I used this method, then in my heart I probably wouldn’t feel very good. Photographer captures the bright neon signs of Hong Kong before they disappear forever. Meredith Weiss, "Student Activism in Malaysia: Crucible, Mirror, Sideshow" (Cornell SEAP/NUS Press, 2011) 150323075432. ‘I rule my own ocean micronation’ Hygge: The Dark Side of Danish Comfort, a Story by Dorthe Nors. Dorthe Nors | Longreads | August 2015 | 8 minutes (1,904 words) Our latest Longreads Exclusive is a previously unpublished short story by Danish writer Dorthe Nors, as chosen by Longreads contributing editor A. N. A Gentle Occupation: Dutch Military Operations in Iraq, 2003-2005, Zaalberg, ten Cate. Fascination With Chernobyl Inspires Surreptitious Visits. "What was it? A meteorite that fell to Earth? Or a visitation from outer space? Roma women in Europe: the silenced, underreported gender oppression.

European countries are always praised for the strides they make towards gender equality. European nations consistently rank on top of quality of life rankings and measurements. History Is Who You’ve Lost by Rita Gabis. Human Rights Issues in Serbia and Hungary. In Kosovo, a thirst for progress, and beer, too. New evidence for the style of the "Fraser artist" in Delhi: Portraits of Afghans 1808-10.

Roman Numerals. RAM Roman Army Structure on Vimeo. Gladiators in Ancient Rome: how did they live and die? The Mystery of ISIS by Anonymous.