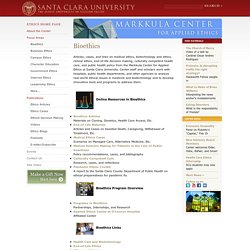 Center staff and scholars work with hospitals, public health departments, and other agencies to analyze real-world ethical issues in medicine and biotechnology and to develop innovative tools and programs to address them. Online Resources in Bioethics Bioethics Articles Materials on Cloning, Genetics, Health Care Access, Etc. Presidential Commission for the Study of Bioethical Issues. American Medical Association Journal of Ethics (formerly Virtual Mentor) International Journal of Feminist Approaches to Bioethics. The Neuroethics Blog. Duke University Press. Neuroethics. Neuroethics is a forum for interdisciplinary studies in neuroethics and related issues in the sciences of the mind. 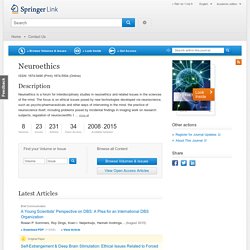 A four-part working bibliography of neuroethics: part 1: overview and reviews ¿ defining and describing the field and its practices. Biopolitics. 10 Great Articles about Death. The best articles about death and essays about death -- Great essays on death and articles on death Life after Death After Life by Joan Didion "Life changes fast. 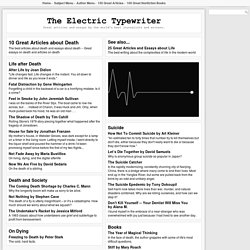 Life changes in the instant. You sit down to dinner and life as you know it ends. " Rest in Peace: Stories About Death Care. I. 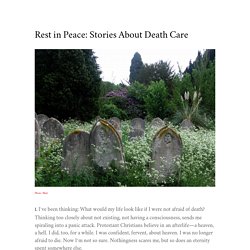 I’ve been thinking: What would my life look like if I were not afraid of death? Thinking too closely about not existing, not having a consciousness, sends me spiraling into a panic attack. Protestant Christians believe in an afterlife—a heaven, a hell. I did, too, for a while. I was confident, fervent, about heaven. A month ago, I shared a reading list about architecture. The Neuroethics Blog: Is Brain Dead Really Dead? By Amber Green Amber Green is currently a senior in the Emory College of Arts and Sciences, double majoring in Neuroscience and Behavioral Biology and Philosophy. 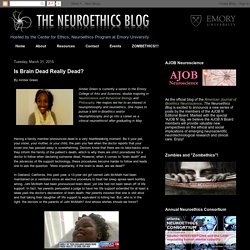 Her majors led her to an interest in neurophilosophy and neuroethics. She hopes to pursue a MA in Bioethics and/or Neurophilosophy and go into a career as a clinical neuroethicist after graduating in May. Having a family member pronounced dead is a very heartbreaking moment. Be it your pet, your sister, your mother, or your child, the pain you feel when the doctor reports that your loved one has passed away is overwhelming. In Oakland, California, this past year, a 13-year old girl named Jahi McMath had been maintained on a ventilator since an elective procedure to treat her sleep apnea went horribly wrong. Brain death, according to the Uniform Determination of Death Act, is a concept used to describe the “irreversible cessation of the entire brain, including the brain stem.”

Reference. Death in space: The ethics of dealing with astronauts’ bodies. Courtesy of Warner Bros. 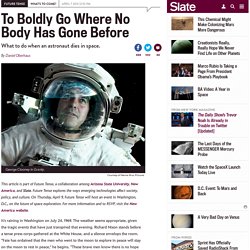 Pictures This article is part of Future Tense, a collaboration among Arizona State University, New America, and Slate. Future Tense explores the ways emerging technologies affect society, policy, and culture. On Thursday, April 9, Future Tense will host an event in Washington, D.C., on the future of space exploration. Little Prevention, Less Cure: Synthetic Biology, Existential Risk, and Ethics. Would have been an odd solution to the dangers of nuclear power, for example. 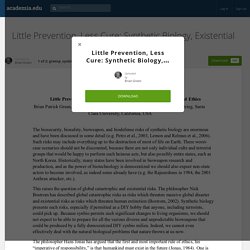 Synthetic biology permits the creation of destructive capacities worse than nuclear weapons and at much less difficultly. Adaptation to and mitigation of these risks will likely need to be, therefore, even more significant than the changes to the world that occurred due to the advent of nuclear weapons. Perhaps it is only because the power of nuclear weapons was made clear on Hiroshima and Nagasaki that nuclear technology has been controlled as well as it has. Cultural Pluralism and Universal Bioethical Standards. About treatments. 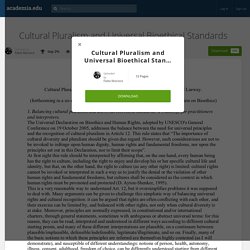 A Doctor with Terminal Cancer Writes to His Baby Daughter. Time for me is double-edged: Every day brings me further from the low of my last cancer relapse, but every day also brings me closer to the next cancer recurrence — and eventually, death. 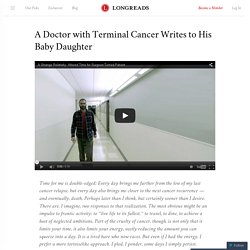 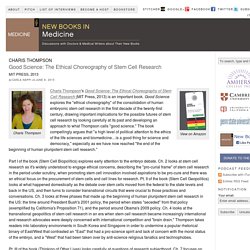 Good Science explores the "ethical choreography" of the consolidation of human embryonic stem cell research in the first decade of the twenty-first century, drawing important implications for the possible futures of stem cell research by looking carefully at its past and developing an approach to what Thompson calls "good science. " The book compellingly argues that "a high level of political attention to the ethics of the life sciences and biomedicine…is a good thing for science and democracy," especially as we have now reached "the end of the beginning of human pluripotent stem cell research.

" Part I of the book (Stem Cell Biopolitics) explores early attention to the embryo debate. Andrew Kim, "An Introduction to Catholic Ethics Since Vatican II" (Cambridge UP, 2015) An Image of God: The Catholic Struggle with Eugenics, Leon. Robert P. George | Princeton University. Dr. Irwin Schatz, the first, lonely voice against infamous Tuskegee study, dies at 83. Dr. Irwin Schatz. (Courtesy of The John A. Frances Oldham Kelsey, F.D.A. Stickler Who Saved U.S. Babies From Thalidomide, Dies at 101. Photo The sedative was Kevadon, and the application to market it in America reached the new medical officer at the Food and Drug Administration in September 1960. The drug had already been sold to pregnant women in Europe for morning sickness, and the application seemed routine, ready for the rubber stamp. But some data on the drug’s safety troubled Dr.

Being Mortal. Love and Cancer at 27 February 20, 2015, 12:00 pm ET · by Tim Molloy Allen Chou was just 27 when he was diagnosed with a brain tumor. Ms. Maynard Was Right – Assisted Suicide Should Be Legal Everywhere. Mark Bernstein suggests that terminally ill patients should have the option of assisted suicide. Bioethicists call for end to 'pay-to-play' clinical research. Hypatia reviews online. Erinn Gilson's discussion of vulnerability is a comprehensive and insightful analysis of an ethical perspective that has been the focus of many contemporary discussions of ethics. She reviews the recent literature on vulnerability with particular attention to feminist contributions. Hypatia reviews online.

The concept of wonder is central to Western philosophy's narrative of origin. Philosophy is said to begin in wonder ultimately unfolding into true knowledge. Over the last few decades, the concept slowly but surely gained attention from feminist scholars. Broadening the term from being merely an epistemological means to an end--knowledge--wonder gradually became an end in itself.