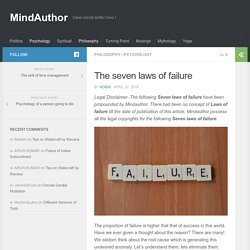 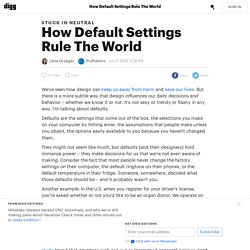 But there is a more subtle way that design influences our daily decisions and behavior – whether we know it or not. It's not sexy or trendy or flashy in any way. I'm talking about defaults. Defaults are the settings that come out of the box, the selections you make on your computer by hitting enter, the assumptions that people make unless you object, the options easily available to you because you haven't changed them. Altruistic people have more sex. Viewed through the lens of evolutionary psychology, altruism takes some explaining. 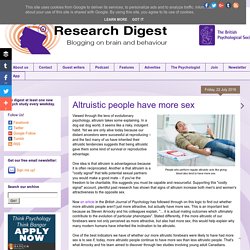 In a dog eat dog world, it seems like a risky, indulgent habit. Yet we are only alive today because our distant ancestors were successful at reproducing – and the fact many of us have inherited their altruistic tendencies suggests that being altruistic gave them some kind of survival or reproductive advantage. One idea is that altruism is advantageous because it is often reciprocated. Another is that altruism is a "costly signal" that tells potential sexual partners you would make a good mate – if you've the freedom to be charitable, this suggests you must be capable and resourceful. Supporting this "costly signal" account, plentiful past research has shown that signs of altruism increase both men's and women's attractiveness to the opposite sex. Men and women who scored higher on altruism said they were more attractive to, and received more interest from the opposite sex.

When Adult ADHD Looks Something Like ‘Flow’ Writers, entrepreneurs, and creative leaders of all types know that intense focus that happens when you’re “in the zone”: You’re feeling empowered, productive, and engaged. 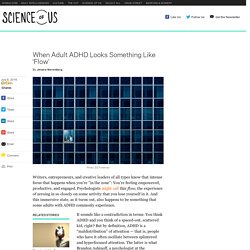 Psychologists might call this flow, the experience of zeroing in so closely on some activity that you lose yourself in it. And this immersive state, as it turns out, also happens to be something that some adults with ADHD commonly experience. The 3 Essential Elements of Attraction. To Get Happier, Focus on What Makes You Miserable. About 20 years ago, Randy J. 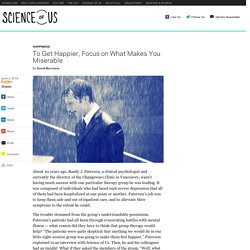 Paterson, a clinical psychologist and currently the director of the Changeways Clinic in Vancouver, wasn’t having much success with one particular therapy group he was leading.

10 Science-Backed Ways to Become Happier -GymLion. Everyone wants to be happier. 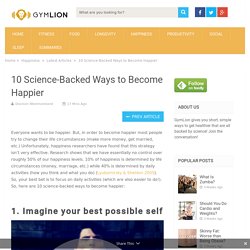 But, in order to become happier most people try to change their life circumstances (make more money, get married, etc.) Unfortunately, happiness researchers have found that this strategy isn’t very effective. Teaching children the ancient "mental abacus" technique boosted their maths abilities more than normal extra tuition. Seeing an expert abacus user in action is a sight to behold. 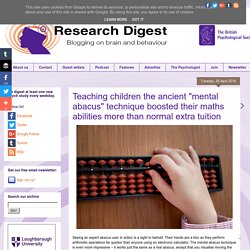 Their hands are a blur as they perform arithmetic operations far quicker than anyone using an electronic calculator. The mental abacus technique is even more impressive – it works just the same as a real abacus, except that you visualise moving the beads in your mind's eye (check out this video of people using mental abacus to perform amazing feats of arithmetic). Surprisingly, there is little research on the benefits of teaching the mental abacus technique to children. But now, for a paper in Child Development, psychologists in the US have conducted a three-year randomised controlled trial of the effects of teaching the mental abacus on 183 five-to-seven year-old children at a charitable school in Vadodara, India.

How free money lifts people out of poverty. AP Images We tend to think that simply giving people money makes them lazy. 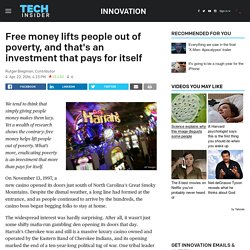 Yet a wealth of research shows the contrary: free money helps lift people out of poverty. What’s more, eradicating poverty is an investment that more than pays for itself. On November 13, 1997, a new casino opened its doors just south of North Carolina’s Great Smoky Mountains. Despite the dismal weather, a long line had formed at the entrance, and as people continued to arrive by the hundreds, the casino boss began begging folks to stay at home. The widespread interest was hardly surprising. Eight Habits that Improve Cognitive Function. Science Says Silence Is Much More Important To Our Brains Than We Think.

In 2011, the Finish Tourist Board ran a campaign that used silence as a marketing ‘product’. 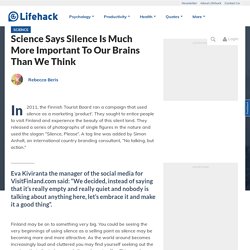 They sort to entice people to visit Finland and experience the beauty of this silent land. They released a series of photographs of single figures in the nature and used the slogan “Silence, Please”. A tag line was added by Simon Anholt, an international country branding consultant, “No talking, but action.” Mass surveillance silences minority opinions, according to study. By Karen TurnerMarch 28 at 11:15 AM (Damian Dovarganes/AP) A new study shows that knowledge of government surveillance causes people to self-censor their dissenting opinions online. 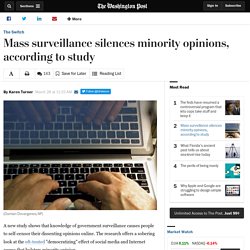 The research offers a sobering look at the oft-touted "democratizing" effect of social media and Internet access that bolsters minority opinion. The study, published in Journalism and Mass Communication Quarterly, studied the effects of subtle reminders of mass surveillance on its subjects. Future - Why contemplating death changes how you think. If death is the final taboo, it might not be for much longer. There has, in recent years, been increasing effort to promote conversations about death and dying, both in the home and in more public settings. For example, death cafes, first launched in Switzerland in 2004, have spread around the world, enabling people to speak about their fears over cake and coffee.

Our reluctance to talk about death is often taken as evidence that we are afraid, and therefore suppress thoughts about it. However, there is little direct evidence to support that we are. So what is a “normal” amount of death anxiety? Thinking about death increases our nationalistic bias and makes us more prejudiced against other racial, religious and age groups. No Evidence of the Ego-Depletion Effect across Task Characteristics and Individual Differences: A Pre-Registered Study. Abstract Ego-depletion, a psychological phenomenon in which participants are less able to engage in self-control after prior exertion of self-control, has become widely popular in the scientific community as well as in the media. However, considerable debate exists among researchers as to the nature of the ego-depletion effect, and growing evidence suggests the effect may not be as strong or robust as the extant literature suggests.

The Differences Between Happiness and Meaning in Life. “Humans may resemble many other creatures in their striving for happiness, but the quest for meaning is a key part of what makes us human, and uniquely so.” — Roy Baumeister et al. (2013) The pursuit of happiness and meaning are two of our most central motivations in life. A wealth of research in positive psychology suggests that happiness and meaning are, in fact, essential elements of well-being.

Happiness and meaning are strongly correlated with each other, and often feed off each other. The more meaning we find in life, the more happy we typically feel, and the more happy we feel, the more we often feel encouraged to pursue even greater meaning and purpose. A Stanford psychologist explains why spacing out and goofing off is so good for you. (Photo by BigStock) We believe that the opposite of focus— daydreaming, goofing off, spacing out— is to be avoided. Worse yet, having problems focusing is seen as an obstacle to overcome and even as pathological. Self- help books and productivity bloggers strive to keep us on task with advice and hacks. When we fail to come up with the results we were hoping for, we wonder whether we just aren’t working or concentrating hard enough. What Sort of Chaos Do You Invite?

13 cognitive biases that impede our rational thinking ability. By Hanan Parvez Choice-supportive bias Your father prepares dinner, saying that he tried a brand new recipe. 111 Discoveries from Brain and Psychology Research in 2015. 52 Concepts You Missed in School for your Cognitive Toolkit. Why don’t people like their opinions getting challenged?

Why Free Markets Make Fools of Us by Cass R. Sunstein. Mobile. Authors. The Alarming New Research on Perfectionism. The misuse of psychological arguments in the immigration debate: why social psychology matters in the real world. Professor Steve Reicher recently gave a lecture on the fundamental questions facing social psychology. Perspectives on Psychological Science. Build Self-Esteem Using These Powerful Psychological Principles. Drawing Ability Has Psychological Basis In Perception And Memory, Researchers Say. Society of Addiction: Capitalism, Dopamine and the Consumer Junkie. It's not a lack of self-control that keeps people poor. When considering poverty, our national conversation tends to overlook systemic causes. This Graphic Explains 20 Cognitive Biases That Affect Your Decision-Making.

Shared Perceptions: Morality is Embedded in Social Contexts » Character and Context. If Money Doesn’t Make You Happy, Consider Time. Our search to understand what makes humans happy (or happier) goes back centuries. Mobile. Authors. What are some examples of restaurants using psychology to manipulate our spending and eating habits? - Quora. How to learn 30 languages. The Power of Posture – Changing How You See the World and the Science of Survival and Success. Study: Anti-abortion views linked to sexist attitudes towards women. Neurobiologists restore youthful vigor to adult brains.

Nothing beats a good night’s sleep for helping people absorb new information, new research reveals. A Sniff of Happiness: Chemicals in Sweat May Convey Positive Emotion - Association for Psychological Science. The effect of grounding the human body on mood. Psychologists can influence people's moral choices by tracking their gaze.