True Colors: Mighty Girl Books for Pride Month. Whether your Mighty Girl is a member of the LGBTQ community, or an LGBTQ ally, these books will show her that her experience is not unique: millions of people stand with her. 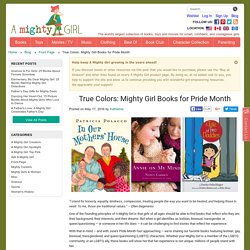 “I stand for honesty, equality, kindness, compassion, treating people the way you want to be treated, and helping those in need. To me, those are traditional values.” — Ellen Degeneres One of the founding principles of A Mighty Girl is that girls of all ages should be able to find books that reflect who they are: their background, their interests, and their dreams.

But when a girl identifies as lesbian, bisexual, transgender, or queer/questioning — or someone in her life does — it can be challenging to find stories that reflect her experience. 6 Picture Books About Transgender Children. This is a hot button issue, but hear me out. 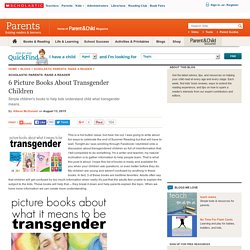 I was going to write about fun ways to celebrate the end of Summer Reading but that will have to wait. Tonight as I was scrolling through Facebook I stumbled onto a discussion about transgendered children so full of misinformation that I felt compelled to do something. I'm a writer and teacher, my natural inclination is to gather information to help people learn. Arsenal Pulp Press Home Page. Lesbian Books and eBooks, Lesbian Novels and Short Stories - Bella Books. Bold Strokes Books. Lambda Literary. Digital Catalog - Macmillan Children's Publishing Group. PowerPoint and PDF exports will only yield the first 200 results. 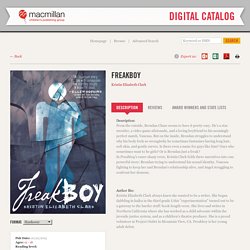 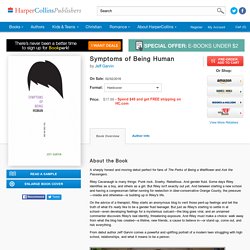 Riley Cavanaugh is many things: Punk rock. Snarky. Rebellious. And gender fluid. Some days Riley identifies as a boy, and others as a girl. Boy Meets Boy by David Levithan. ALA Best Books for Young Adults WINNER 2004 ALA Quick Pick for Reluctant Readers WINNER 2004 New Jersey Garden State Teen Book Award NOMINEE 2006 The Horn Book, March 26, 2013:“Using a diverse cast of queer characters, David Levithan’s semi-utopian Boy Meets Boy…affirm[s] that there is a whole rainbow of ways to be gay.” 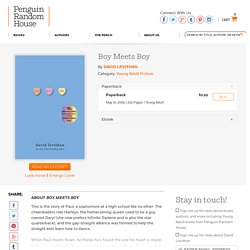 Openly Straight. Openly Straight Written by Bill Konigsberg A funny, honest novel about being out, being proud… and being ready for something else. 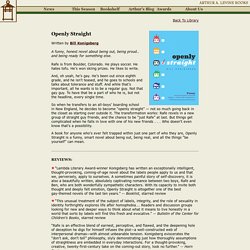 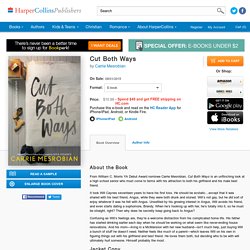 Morris YA Debut Award nominee Carrie Mesrobian, Cut Both Ways is an unflinching look at a high school senior who must come to terms with his attraction to both his girlfriend and his male best friend. It took Will Caynes seventeen years to have his first kiss. He should be ecstatic…except that it was shared with his best friend, Angus, while they were both drunk and stoned. Will’s not gay, but he did sort of enjoy whatever it was he felt with Angus. Simon vs. the Homo Sapiens Agenda - Becky Albertalli. William C. 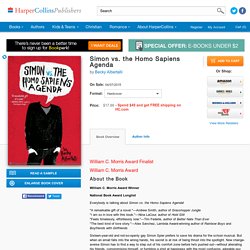 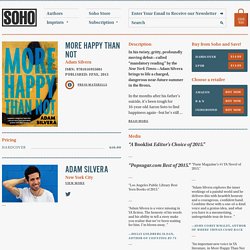 Why does happiness have to be so hard? “Silvera managed to leave me smiling after totally breaking my heart. Vanished - E. E. Cooper. Gone Girl meets Pretty Little Liars in the first book of this fast-paced psychological thriller series full of delicious twists and turns. 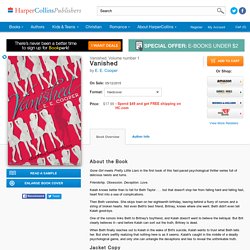 Friendship. Obsession. Deception. Love. Kalah knows better than to fall for Beth Taylor . . . but that doesn't stop her from falling hard and falling fast, heart first into a sea of complications. You and Me and Him. Chapter 1 Let’s get one thing straight from the very beginning: I am not one of those shrinking-violet fat girls. I don’t sit alone in my bedroom playing Billie Holiday albums while drowning my sorrows in a carton of ice cream. Okay, once—maybe twice—a year, but not every weekend.

I have friends, a great job in a vintage record store, and even some minor social status. But I am an overweight teenage girl going to an American high school. The current issue: Which outfit will maximize the four and half pounds I lost this summer and minimize the remaining flesh? Sarah McCarry. “Tally's growth throughout is palpable, and the language-whether describing sex or music or nightmares-is breathtaking. Fluid and aching, with a diverse cast and rich worldbuilding.” —Kirkus Reviews (starred review) “The stunning, densely packed story is full of as much intoxicating poetry as meticulous scientific explanations.

A Place in Your Heart children's book for foster children. Last Year I was invited by the Benevolent Society to write and illustrate a story for them, the subject matter was very close to my heart. I have lived experience as a foster/kinship carer and am always looking for opportunities to honour the experience and voice of children… it was a YES from me. A Place In Your Heart is a book written for children placed in foster care with LGBTIQ carers.A Place in Your Heart, it is aimed at children aged 7-12 and celebrates the diversity of foster care families. The book is dedicated to all gay, lesbian, bi-sexual, queer, transgender and intersex foster carers who have opened their hearts and homes to children in need.In Australia, more than 40,000 children live in foster care, more than 18,000 of them in NSW. 17 Books With LGBT Characters That Will Actually Change Your Life.

Top 10 LGBTQ Literature, by Brad Hooper. A Different Light: graphic novels featuring LBGTQ characters - The Hub. A few months ago, I wrote a guide to finding YA with LGBTQ characters and themes. Today, I decided to put my own advice to work and create a list of graphic novels that feature gay, lesbian, or transgender characters. The portrayal of potentially sensitive topics is made all the more sensitive by the visual nature of graphic novels. Because of this, I’ve divided the list up into two age groups. The books recommended for older teens feature more nudity, language, dark themes, and visual depictions of sexuality than the books suggested for the younger group–but, of course, every title is a little different and every reader has the right to decide what’s best for him or her. Note: Manga has a rich and complicated history of putting out stories with queer characters.

A Different Light: LGBTQ Characters on 2013 "Best Of" Lists - The Hub. One of my favorite things about end-of-year “Best Of” lists is the chance to see what I’ve read – and what I’ve missed – in YA in the last year. A yearly review of the lists is also a good chance to track trends as they evolve from year to year. As someone who’s particularly interested in the portrayal of LGBTQ teens in young adult literature, reviewing “Best Of” lists is a good way to check in on the status on LGBTQ literature for teens. Transgender Day of Remembrance: A Booklist - The Hub. November 20th marks Transgender Day of Remembrance, a day to remember those who have been killed because of their gender identity or expression. Diversify YA Life: LGBTQ Fiction and Non-Fiction - The Hub. If your library is anything like mine, your LGBTQ displays and books are among the most popular in your collection.

May Day Mine by Verity Croker. This children's picture book about a same-sex wedding should be in every Australian primary school. Transgender Teddy will teach kids about gender fluidity. Gay-Themed Picture Books for Children. Review of 'What we Left Behind' Discovering Sexuality Through Teen Lit. "Some boys just know they're gay," writer Benjamin Alire Saenz tells NPR's Michel Martin. "I don't know how that happens. Kwame Alexander wins Newbery medal with basketball tale The Crossover. Holding the Man: Popular Penguins. The Latest Booklist: Spotlight on LGBTQ Literature. Inside A Dog. Everything Leads to You by Nina LaCour. Read Proud Listen Proud. Always Darkest Before the Dawn: Male/Male Best Bets for July 2015 by willaful. Focus on Me by Megan Erickson I happened to be catching up on Marie Sexton's “Coda” series when the Supreme Court ruling in favor of marriage equality was announced, and what a thrill it was to realize that those contemporary romances, in which one couple has to have a “commitment ceremony” instead of a true wedding, and then a complicated adoption process, had just become historical!

It'll be too soon for most July m/m romance to reflect the new American reality, but I'm looking forward to seeing how it shapes future works. In the meantime, we have some serious angsty goodness with suffering heroes to enjoy. Focus on Me (In Focus #2) by Megan Erickson Colin Hartman can now add college to his list of failures. In this tender romance, a warm-hearted young man finds the perfect lover to take care of, only to realize that his love and care can only do so much in the face of mental health issues. Ladies Night: Adventures in Lesbian Sci-Fi Romance by Heather Massey. 16 LGBT Books That Will Actually Change Your Life. LGBTQI children and young adult books and resources on Pinterest.