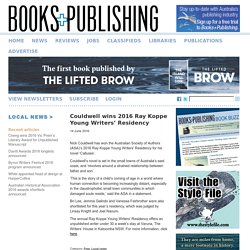 Couldwell’s novel is set in the small towns of Australia’s east coast, and ‘revolves around a strained relationship between father and son’. ‘This is the story of a child’s coming of age in a world where human connection is becoming increasingly distant, especially in the claustrophobic small town communities in which damaged souls reside,’ said the ASA in a statement. Bri Lee, Jemma Galindo and Vanessa Fairbrother were also shortlisted for this year’s residency, which was judged by Linsay Knight and Joel Naoum. Ngaio Marsh Award 2016 longlist announced. 9 June 2016 The longlist for this year’s Ngaio Marsh Award for New Zealand crime fiction has been announced. 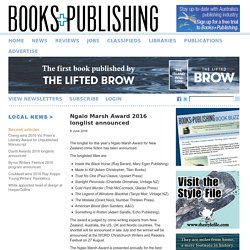 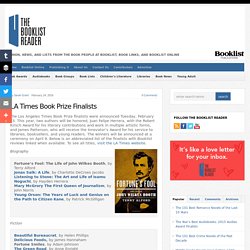 This year, two authors will be honored, Juan Felipe Herrera, with the Robert Kirsch Award for his literary contributions and work in multiple artistic forms, and James Patterson, who will receive the Innovator’s Award for his service to libraries, booksellers, and young readers. The winners will be announced at a ceremony on April 9. Below is an abbreviated list of the finalists with Booklist reviews linked when available. To see all titles, visit the LA Times website. Adelaide Festival Awards for Literature 2016 winners announced. 29 February 2016 The winners of the 2016 Adelaide Festival Awards for Literature were announced at a ceremony on 27 February as part of Adelaide Writers’ Week. 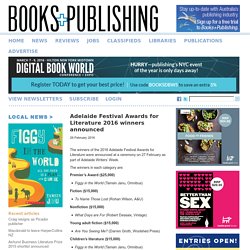 The 2015 Cybils WINNERS! Dory has one foot in reality and the other in the world of her vivid imagination. 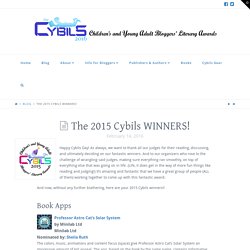 So when it’s time for school to start, her brother and sister warn her that it’s time to leave her imagination at home–she needs to make a real, live friend or else forever be a “weirdo.” Nervous as she is, Dory goes to school only to be surprised and delighted to meet a girl in her class named Rosabelle–a princess who lives in a castle and has a pet dragon! As Dory does her best to win over her new friend, including making plans to escape the clutches of an evil witch, her siblings doubt the whole thing. Can such a friend really be real? In her sequel to Dory Fantsmagory, Hanlon has created a hilariously unpredictable story about friendship, and captured the true nature of kids in a compelling way. 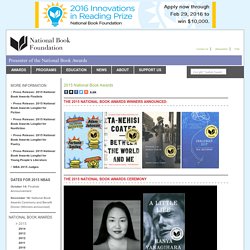 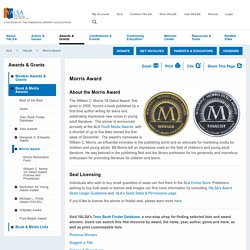 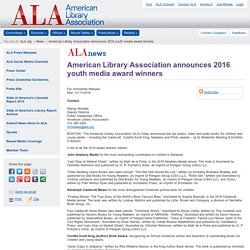 A list of all the 2016 award winners follows: John Newbery Medal for the most outstanding contribution to children’s literature: “Last Stop on Market Street,” written by Matt de la Peña, is the 2016 Newbery Medal winner. The book is illustrated by Christian Robinson and published by G. PM's Literary Awards - Ministry for the Arts. The Prime Minister, the Hon Malcolm Turnbull MP, and the Minister for the Arts, Senator the Hon Mitch Fifield have announced the winners of the 2015 Prime Minister's Literary Awards at an event in Sydney on Monday 14 December. 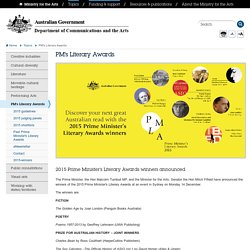 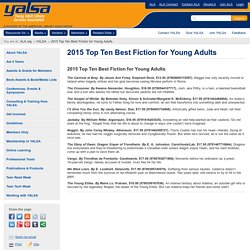 He is Associate Editor of The FutureBook for London’s The Bookseller. His "Porter Anderson Meets" newsmaker interviews for The Bookseller are also read at The FutureBook, and he conducts those interviews live on Twitter with the hashtag #PorterMeets. His "Writing on the Ether" column about publishing is read at ThoughtCatalog.com, which is among the world’s 50 largest sites tracked by Quantcast. He has interviewed the author-activist Hugh Howey in live sessions at both PubSmart in Charleston and Klopotek’s Publishers Forum in Berlin. Aurealis Awards winners (97 books) Aurealis Awards. Sisters in Crime Australia. Bank Street College of Education Best Books. Arts Tasmania. People’s Choice Awards - Vote now! - Tasmanian Arts Guide. PEN / Faulkner Foundation. Below are the past winners and finalists of the PEN/Faulkner Award for Fiction from 1981 through the present.

Allen & Unwin are absolutely thrilled to announce that Sofie Laguna has won Australia's most prestigious literary prize - the 2015 Miles Franklin Literary Award for her mesmerising novel The Eye of the Sheep. Commenting on behalf of the judging panel, State Library of New South Wales Mitchell Librarian, Richard Neville, commented that 'the power of this finely crafted novel lies in its raw, high-energy, coruscating language which is the world of young Jimmy Flick, who sees everything.

But his manic x-ray perceptions don't correspond with the way others see his world. His older brother understands him some of the time, and his mother almost all of the time, but other people, including his violent father, just see him as difficult. Weathering successive waves of domestic violence, Jimmy navigates his way through the shoals of alcohol-abuse, illness and tragedy that swamp his parents, and ultimately reaches the possibility of equanimity. Humour Award. Six of the most amusing books published over the last two years have been shortlisted in Australia’s inaugural $10,000 biennial Russell Prize for Humour Writing.

Booksellers New Zealand. The LIANZA Children’s and Young Adult’s Book Awards. The Strand Critics Awards: A Literary Award for Crime Fiction. BBA_last_Winners. C. J. Branford Boase Award Shortlist. Now in its sixteenth year the Branford Boase Award is recognised as one of the most important awards in children’s books with a hugely impressive record in identifying authors with special talent at the start of their careers. Award Winners - Random House Books Australia. 2015 Winners and Finalists. New Children's Author Prize 2015. YA Graphic Novels - Cybils Awards. My very first time as a Cybils judge was in 2006, as a part of the Graphic Novels round 1 panel. I’ve participated every year since then (not always in Graphic Novels, but often), and one of my favorite aspects of Cybils judging is having the opportunity to read such an immense variety of books with intriguing, diverse characters and stories.

Diversity has been the word of the day lately when it comes to books for young readers, but I know firsthand that Cybils has always had an eye out for reads that appeal to the widest possible range of readers. Batchelder Award. EBYR Awards : Eerdmans. First ever YA Book Prize shortlist announced! Folio Prize for Fiction. The Stella Prize. Parents' Choice Award Winners: BOOKS.