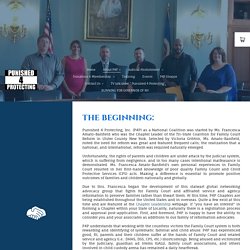 (P4P) as a National Coalition was started by Ms. Francesca Amato-Banfield who was the Chapter Leader of the Tri-State Coalition for Family Court Reform in Ulster County New York. Selected by Victoria Gribbin, Ms. Amato-Banfield, noted the need for reform was great and featured frequent calls; the realization that a national, and international, reform was required naturally emerged. Unfortunately, the rights of parents and children are under attack by the judicial system, which is suffering from negligence, and in too many cases intentional malfeasance is demonstrated. Due to this. P4P understands that working with the countless victims the Family Court system is both rewarding and identifying of systematic familial and child abuse.

P4P works with advocates, crime specialists, domestic violence experts, law enforcement, legis-lature, therapists, victimization specialists, whistleblowers, etc. throughout the United States and abroad. Doctors Caught on Tape Plotting to Take Custody of Newborns Whose Parents Refuse Vitamin K Shots. After a class-action lawsuit was filed in October against several hospitals, Illinois Department of Children and Family Services (DCFS), and several doctors, audio has surfaced of some of the defendants in the case plotting to collude with DCFS to take children away from parents extra-lawfully. 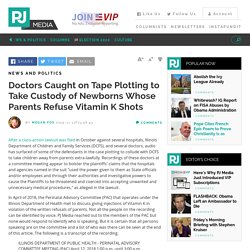 Recordings of these doctors at a committee meeting appear to bolster the plaintiffs' claims that the hospitals and agencies named in the suit "used the power given to them as State officials and/or employees and through their authorities and investigative powers to cause the Plaintiffs to be threatened and coerced into accepting unwanted and unnecessary medical procedures," as alleged in the lawsuit. In April of 2018, the Perinatal Advisory Committee (PAC) that operates under the Illinois Department of Health met to discuss giving injections of Vitamin K in violation of the written refusals of parents. Not all the people on the recording can be identified by voice. Alabama Lab Owner Arrested for Falsifying Results of Drug Tests Used to Medically Kidnap Children. Kentucky Judges Pre-Signed Blank Legal Documents So That Child Services Could Take Custody of Kids on Nights and Weekends – Reason.com. How To Get My Kids Back From Child Protective Services. 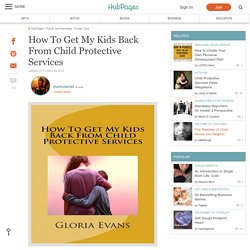 We fostered about 15 over the years. I haven't always agreed with the reasons the children were removed from the home, and honestly It was hard to not have sympathy for the parents. Being a parent , I couldn't imagine anything as horrific as having my children taken from me. But I was there to pick up some very sad pieces afterward, love them unconditionally and to give the children the best stable environment possible . Over the years I realized the majority of cases had a similar thread. Our first child was a boy, whose mother left him at day care and never returned.

CPS investigation lesson learned and advice for others - Survivalist Forum. These are my personal thoughts and observations regarding Child Protective Services (CPS) and Police Investigations in cases of suspected child abuse. 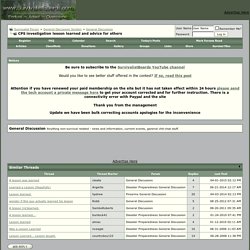 I highly recommend anyone with kids, or thinking about kids read on, even if you don’t have children or if yours are grown and out of the house, this should be an informative post. I am no expert of course, and this will simply be an anecdotal recount of events as they occurred, to the best of my memory, with some lessons learned and advice along the way. Educating The General Public on Foster Care, Adoption and Social Services / CPS / DCFS abuse. Something For The People. CPS vs PACHA KI II. Breastfed, Homebirthed Babies Taken Away From Parents For Not Using Hospital. 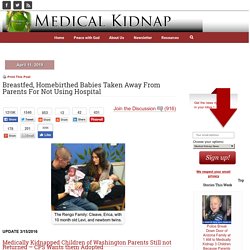 Medically Kidnapped Children of Washington Parents Still not Returned – CPS Wants them Adopted. Startribune. Child protection workers and care providers failed to work together for more than a year to safeguard 6-year-old Kendrea Johnson, despite knowing she was severely mentally ill and living in a chaotic Brooklyn Park foster home, according to city and county records and a source familiar with the case. 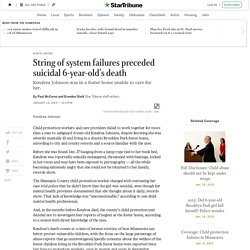 Before she was found Dec. 27 hanging from a jump rope tied to her bunk bed, Kendrea was reportedly sexually endangered, threatened with beatings, locked in her room and may have been exposed to pornography — all the while becoming extremely angry that she could not be returned to her family, records show. The Hennepin County child protection worker charged with overseeing her case told police that he didn’t know that the girl was suicidal, even though her mental health providers documented that she thought about it daily, records show. That lack of knowledge was “unconscionable,” according to one child mental health professional. A possible suicide. CPS sued for kidnaping children. December 22, 2014 A lawsuit filed Dec. 12 says Riverside County Child Protective Services staff have made a habit of kidnapping children. 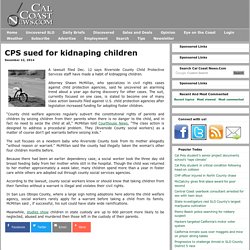 Attorney Shawn McMillan, who specializes in civil rights cases against child protection agencies, said he uncovered an alarming trend about a year ago during discovery for other cases. The suit, currently focused on one case, is slated to become one of many class action lawsuits filed against U.S. child protection agencies after legislation increased funding for adopting foster children. Untold Story of Child Abuse and Mistreatment at US DCFS Facilities. 17:45 13.02.2015(updated 19:40 14.02.2015) Get short URL The violence and brutality young Americans face at DFCS facility centers across the country, has been exposed by Brent Walker, an independent photojournalist who shows the reverse side of the "American dream. 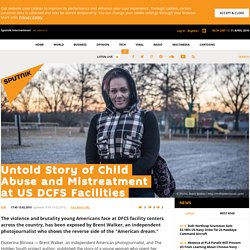 " Ekaterina Blinova — Brent Walker, an independent American photojournalist, and The Hidden South project author, published the story of a young woman who spent her childhood in the DFCS treatment facilities in Atlanta, GA, exposing a blistering nationwide problem. Last year Brent Walker gave an interview to Sputnik, narrating of his project of "documenting conversations with the unseen" – moving stories of "the insulted and humiliated" of the United States, demonstrating the other side of the glossy image of the country. Family Rights Project. If your kid is picked up by the police (or for that matter if you are) do they know to keep their mouth shut until they see you or a lawyer? 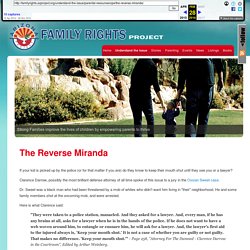 Clarence Darrow, possibly the most brilliant defense attorney of all time spoke of this issue to a jury in the Ossian Sweet case. Dr. Sweet was a black man who had been threatened by a mob of whites who didn't want him living in "their" neighborhood. He and some family members shot at the oncoming mob, and were arrested. Melissa Diegel testifies at State House TODAY. Child Protective Services False Allegations. Why I Started the FightCPS Website Every day in the USA families face false accusations of child abuse. 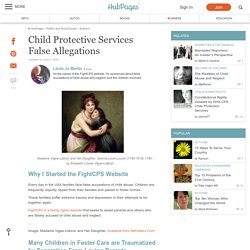 Children are frequently unjustly ripped from their families and placed in foster homes. These families suffer extreme trauma and depression in their attempts to be together again. FightCPS is a family rights website that seeks to assist parents and others who are falsely accused of child abuse and neglect. How to Sue CPS in Federal Court - FightCPS: Child Protective Services-CPS-False Accusations. ReturnMyChild.com - Legally Investigating CPS Fraud, Corruption, & Family Parental Rights - NATIONWIDE. Does the State Ever Have a “Right” to Remove Children from a Home? Brian ShilhavyHealth Impact News When does the State have the right to remove children from a home where they are living with their parents?

We have been covering medical kidnapping stories now on MedicalKidnap.com for over three years. This website was started to document the many stories that were coming to our attention where families were losing their children to the State, and the foster care system, over medical disagreements. Are Hospitals And Child Protective Services Conspiring To Kidnap Children? A disturbing pattern is beginning to emerge with children being removed from their parents’ custody over differences in medical opinions. The most famous of these is the Justina Pelletier case, where Boston Children’s Hospital fought for and won state custody of her over a disagreement about a medical diagnosis. Recently, The Inquisitr brought the news of two pre-teen sisters, Kayla and Hannah Diegel, who are currently being held by Phoenix Children’s Hospital, where they are drastically losing weight under the care of the state.

On the one hand, people think of CPS with appreciation as they envision a selfless agency rescuing innocent children from horrific conditions. Indeed, CPS workers across the country do this routinely. Take Action. Families are being abused by State CPS and Family Courts through out the United States of America, this is a major issue that needs to be addressed, Families that have had their civil rights violated through family court proceedings and the fact that all due process and constitutional rights are violated and manipulated by family court judges, District Attorneys, and Commissioners of /social services departments as well as CPS workers, and court appointed attorneys that are not working for the clients but have helped incriminate parents. Also of extreme interest, is obtaining names/phone/location of CPS workers who are falsifying or have falsified documents in court and who have lied in a court setting. 1.

Should a Mental Illness Mean You Lose Your Kid? This story was co-published with The Daily Beast. In August 2009, Mindi, a 25-year-old struggling new parent, experienced what doctors later concluded was a psychotic episode. She had been staying in a cousin's spare basement room in De Soto, Kansas, while trying get on her feet after an unexpected pregnancy and an abusive relationship. Children Committing Suicide in CPS/DCFS Care.

A Broken System: Child-Parent Sanctity (CPS) A Very Critical Look At Foster Care. U.S. Foster Care: A Flawed Solution That Leads To Long-Term Problems? – STIR Journal. When 'Stranger Danger' is actually the police and CPS. Social worker recorded false supervision record and forged supervisee’s signature. Posed by model. "It's soul-destroying and career-destroying": social workers in the firing line. Better Safe Than Sorry? Have you ever heard or read the saying, in reference to when you should call CPS, “better safe than sorry?” If you leave your kids alone, it’s not predatory strangers who are a risk. As a child, Ashley Thomas loved to go, by herself, to a meadow about a 10-minute walk from her house in Ojai, California.

The Untold Story about the Destruction of Families at the Hands of CPS » Politichicks.com. Nosy Neighbor Calls CPS After Seeing Kid Playing Outside. A mom was sorting her mail when she heard a knock at her front door. She opened it to see a neighbor standing there with her son. The neighbor saw her son outside, thought he was in danger because he was playing alone, and delivered him to the mom's door step. What happens next will blow your mind. "I whipped the door open, trying to figure out what was happening.

The woman smiled. So begins the story that Kari Anne Roy shared on her blog this week, Haiku Of The Day. Are Hospitals And Child Protective Services Conspiring To Kidnap Children? Parents who had kids taken by CPS protest U of M. CPS Destroying Rengo Family: Demands Erica Separate from her Husband to Get Children Back. #Op Expose CPS June 5th Protest + #Op115. Why Child Protective Services Needs To Be Abolished. Foster care scandal deepens: 'Every single staff person has a criminal record' A Family You Love is Having Trouble Parenting: What to do instead of calling CPS – Christian Alliance for Indian Child Welfare. I tested positive for meth when I was in labor. Health Impact News Named in Alabama Lawsuit for Exposing State-sponsored Child Kidnapping.