Occupy Your Brain: On Power, Knowledge, and the Re-Occupation of Common Sense. By Carol Black / schoolingtheworld.org/ Jan 24, 2012 One of the most profound changes that occurs when modern schooling is introduced into traditional societies around the world is a radical shift in the locus of power and control over learning from children, families, and communities to ever more centralized systems of authority. 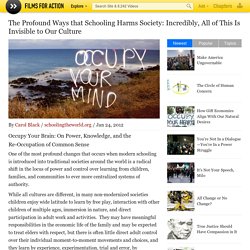 While all cultures are different, in many non-modernized societies children enjoy wide latitude to learn by free play, interaction with other children of multiple ages, immersion in nature, and direct participation in adult work and activities. Learn how to download and delete your searches from Google Search. Ever paid attention to how much info Google Search has about you? 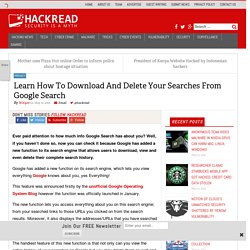 Well, if you haven’t done so, now you can check it because Google has added a new function to its search engine that allows users to download, view and even delete their complete search history. Google has added a new function on its search engine, which lets you view everything Google knows about you, yes Everything! This feature was announced firstly by the unofficial Google Operating System Blog however the function was officially launched in January. The new function lets you access everything about you on this search engine; from your searched links to those URLs you clicked on from the search results.

Moreover, it also displays the addresses/URLs that you have searched for so far. The handiest feature of this new function is that not only can you view the entire history of your searches on Google but you may delete them as well and clear Google’s history about you. How to Download your Google history? Roads to Ruin. CAIRNS, Australia — If you want to see how differently economists and ecologists view the world, just ask them about roads. 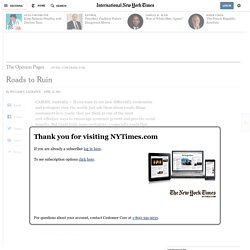 Many economists love roads; they see them as one of the most cost-effective ways to encourage economic growth and provide social benefits. But roads truly scare ecologists — especially roads that penetrate into wilderness areas, nature reserves, and the remnants of rare ecosystems. Why? In such circumstances, roads often open a Pandora’s box of environmental evils. 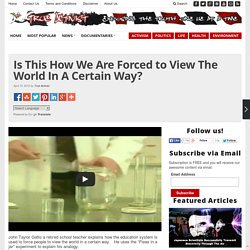 He uses the “Fleas in a jar” experiment to explain his analogy. In the experiment, a scientist placed a number of fleas in a glass jar. They quickly jumped out. He then put the fleas back into the jar and placed a glass lid over the top. The fleas began jumping and hitting the glass lid, falling back down into the jar. Note: Fleas are not “trained”, that’s a marketing term to “sell” the effect. Overpopulation, overconsumption – in pictures. “Quite Unintelligible,” Derrida’s Scathing Criticism from a Teacher. Making the rounds on social media today is an essay that then-student Jacques Derrida had written in English class entitled “Shakespeare’s Idea of Kingship.” 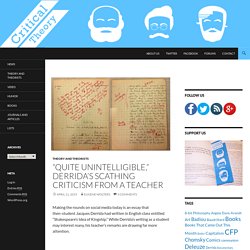 While Derrida’s writing as a student may interest many, his teacher’s remarks are drawing far more attention. “In this essay you seem to be constantly on the verge of something interesting,” the unknown grader wrote, “but, somewhat, you always fail to explain it clearly. A few paragraphs are indeed totally incomprehensible – Probably this essay would have been good with just a little more work in it. As regards language, your English is not idiomatic enough (if generally correct). My advice is: read a lot of English, pen in hand.” Mark Twain Quotes Show he Would Have Been an Activist Today. Mark Twain Florida, Missouri (TFC) – Mark Twain is one of the most loved authors in the United States. 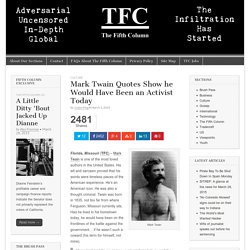 His wit and sarcasm proved that his words were timeless pieces of the American experience. He’s an American icon. He was also a thought criminal. Twain was born in 1835, not too far from where Ferguson, Missouri currently sits. The Condor And The Eagle - PREVIEW HD. Do Riots Work? Justin King March 24, 2015 (TFC) Ferguson, Missouri — After a cop killed an unarmed teenager, riots broke out. 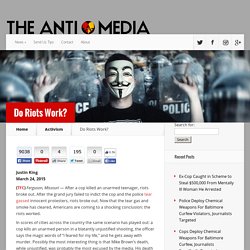 After the grand jury failed to indict the cop and the police tear gassed innocent protesters, riots broke out. Now that the tear gas and smoke has cleared, Americans are coming to a shocking conclusion: the riots worked. In scores of cities across the country the same scenario has played out: a cop kills an unarmed person in a blatantly unjustified shooting, the officer says the magic words of “I feared for my life,” and he gets away with murder. Possibly the most interesting thing is that Mike Brown’s death, while unjustified, was probably the most excused by the media. In Beavercreek, Ohio a young man was gunned down by cops inside a Wal-Mart while committing no crime whatsoever.