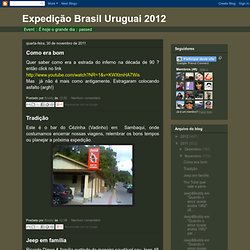 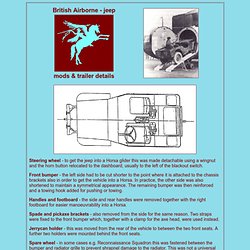 Front bumper - the left side had to be cut shorter to the point where it is attached to the chassis brackets also in order to get the vehicle into a Horsa. In practice, the other side was also shortened to maintain a symmetrical appearance. The remaining bumper was then reinforced and a towing hook added for pushing or towing. Handles and footboard - the side and rear handles were removed together with the right footboard for easier manoeuvrability into a Horsa. Spade and pickaxe brackets - also removed from the side for the same reason. Jerrycan holder - this was moved from the rear of the vehicle to between the two front seats. 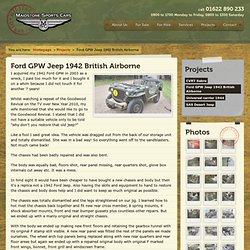 Whilst watching a repeat of the Goodwood Revival on the TV over New Year 2010, my wife mentioned that she would like to go to the Goodwood Revival. I stated that I did not have a suitable vehicle only to be told "why don't you restore that old jeep? " Like a fool I said great idea. The vehicle was dragged out from the back of our storage unit and totally dismantled. She was in a bad way! The chassis had been badly repaired and was also bent. The body was equally bad, floors shot, rear panel missing, rear quarters shot, glove box internals cut away etc. In hind sight it would have been cheaper to have bought a new chassis and body but then it's a replica not a 1942 Ford Jeep. The chassis was totally dismantled and the legs straightened on our jig. The body tub was then painted next and then fitted onto the completed rolling chassis.

British WWII Airborne Jeep Trailer. The white metal square on the axle is used with a flood lamp for blackout convoy purposes in the same way as the Airborne Jeeps rear differential was painted white. 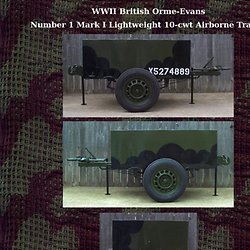 The flood lamp and right side rear running light are turned on by the black bakelite switch beneath the trailer. A second connector is also on the rear to allow power to be supplied to another trailer if needed. Power is passed from the towing vehicle down the cable in the center which runs to a Bakelite junction block. It then goes to the Bakelite lamp switch which has two positions. Airborne Jeep Parts. Airborne Jeep Parts Note. 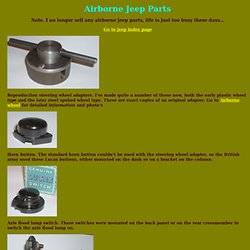 I no longer sell any airborne jeep parts, life is just too busy these days... Go to jeep index page Reproduction steering wheel adapters. I've made quite a number of these now, both the early plastic wheel type and the later steel spoked wheel type. Horn button. Axle flood lamp switch. Axle flood lamp. Trailer connector. Jeep. Mom was a stay at home mom for 19 years, before that she worked in the auto parts industry. 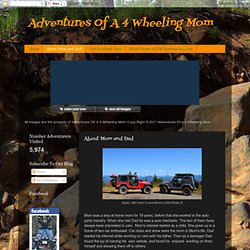 When she met Dad he was a auto mechanic. The two of them have always been interested in cars. Mom's interest started as a child. She grew up in a home of two car enthusiast. Car clubs and show were the norm in Mom's life. When our kids graduated and moved on with their lives we decided to down size our rigs. Mom's first run driving was in the spring of 2011, she overcame a huge fear of driving off of narrow mountain roads and fell in LOVE with wheeling! Mom wants to take the readers along on her adventures with Dad as well as let the reader explore the Off Road world with her.

42FordGPW - Home. GPW_In_Detail. - The '42 GPW - in Detail - Al has the most perfect '42 Ford jeep I have ever seen, with the exception of the lock out hubs, a necessity , as it saves on fuel costs, wear and tear , and as Al uses his jeep regularly , (with now over 40,000 miles up since restoration) , I totally agree with their use, Some will disagree, but then, they don't live in New Zealand and pay the extremely high costs of fuel. 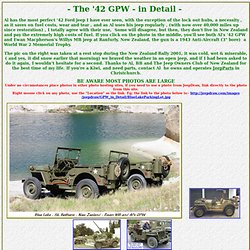 If you click on the photo in the middle, you'll see both Al's '42 GPW and Ewan Macpherson's Willys MB jeep at Ranfurly, New Zealand, the gun is a 1943 Anti-Aircraft (3" bore) a World War 2 Memorial Trophy. The pic on the right was taken at a rest stop during the New Zealand Rally 2001, it was cold, wet & miserable, ( and yes, it did snow earlier that morning) we braved the weather in an open jeep, and if I had been asked to do it again, I wouldn't hesitate for a second.

Thanks to Al, BB and The Jeep Owners Club of New Zealand for the best time of my life. Al's explanation is below. Note!.... Jeep Guerreiro - Utilitários Willys e a mecanização militar brasileira: Setembro 2011. Acima, roda-livre manual. 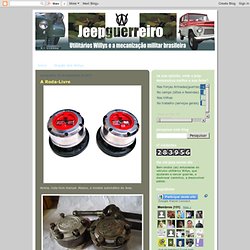 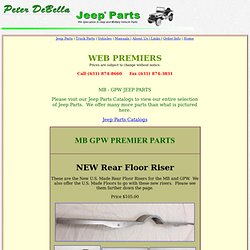 After Years of having only one choice of fuel tanks for your vehicle and dealing with all of the problems that came with them you now have a better alternative. This high quality tank is soldered like an original and even has the Olaco brand marking. Available in early small and standard large. Large opening comes with cap and filler tube.