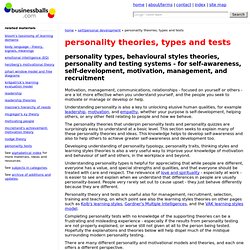 Understanding personality is also a key to unlocking elusive human qualities, for example leadership, motivation, and empathy, whether your purpose is self-development, helping others, or any other field relating to people and how we behave. The personality theories that underpin personality tests and personality quizzes are surprisingly easy to understand at a basic level. This section seeks to explain many of these personality theories and ideas.

The more models you understand, the better your appreciation of motivation and behaviour. The Birkman Method® Belbin's Team Roles. Explanations > Preferences > Belbin team roles Belbin types | Balanced teams | So what? 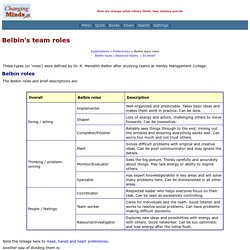 These types (or 'roles') were defined by Dr. R. Meredith Belbin after studying teams at Henley Management College. Belbin roles The Belbin roles and brief descriptions are: Note the linkage here to Head, hands and heart preferences. Another way of dividing them is: Balanced teams Teams work best when there is a balance of primary roles and when team members know their roles, work to their strengths and actively manage weaknesses. To achieve the best balance, there should be: One Co-ordinator or Shaper (not both) for leader A Plant to stimulate ideas A Monitor/evaluator to maintain honesty and clarity One or more Implementer, Team worker, Resource investigator or Completer/finisher to make things happen Identify types when starting up teams and ensure you have a good balance (or handle the difference). 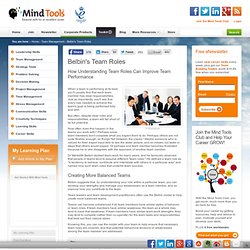 Just as importantly, you'll see that every role needed to achieve the team's goal is being performed fully and well. But often, despite clear roles and responsibilities, a team will fall short of its full potential. How often does this happen in the teams you work with? Dr Meredith Belbin studied team-work for many years, and he famously observed that people in teams tend to assume different "team roles. 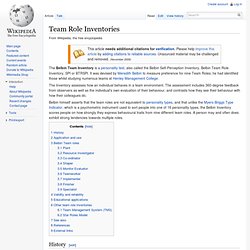 It was devised by Meredith Belbin to measure preference for nine Team Roles; he had identified those whilst studying numerous teams at Henley Management College. The Inventory assesses how an individual behaves in a team environment. The assessment includes 360-degree feedback from observers as well as the individual's own evaluation of their behaviour, and contrasts how they see their behaviour with how their colleagues do. Belbin himself asserts that the team roles are not equivalent to personality types, and that unlike the Myers-Briggs Type Indicator, which is a psychometric instrument used to sort people into one of 16 personality types, the Belbin Inventory scores people on how strongly they express behavioural traits from nine different team roles.

A person may and often does exhibit strong tendencies towards multiple roles. History[edit] BELBIN: The home of Belbin Team Roles.