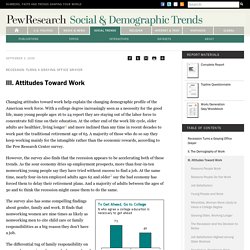 Attitudes Toward Work Changing attitudes toward work help explain the changing demographic profile of the American work force. With a college degree increasingly seen as a necessity for the good life, many young people ages 16 to 24 report they are staying out of the labor force to concentrate full time on their education. At the other end of the work life cycle, older adults are healthier, living longer and more inclined than any time in recent decades to work past the traditional retirement age of 65. A majority of those who do so say they keep working mainly for the intangible rather than the economic rewards, according to the Pew Research Center survey. Global Leadership Forecast 2014. Www.ddiworld.com/DDI/media/trend-research/glf2014-findings/gender-diversity_glf2014_ddi.pdf. Visual Perception. By Saul McLeod published 2007 In order to receive information from the environment we are equipped with sense organs e.g. eye, ear, nose. 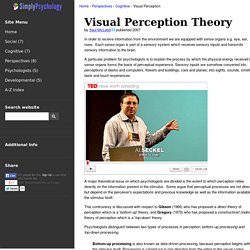 Each sense organ is part of a sensory system which receives sensory inputs and transmits sensory information to the brain. A particular problem for psychologists is to explain the process by which the physical energy received by sense organs forms the basis of perceptual experience. Sensory inputs are somehow converted into perceptions of desks and computers, flowers and buildings, cars and planes; into sights, sounds, smells, taste and touch experiences. Beck Institute. Everyday moments of truth: Frontline managers are key to women’s career aspirations. The result of this trajectory is a well-documented dearth of women in top management roles in America. 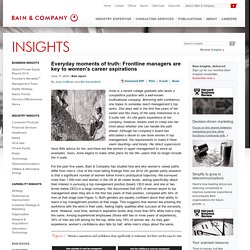 Despite women comprising more than half of all college graduates2 and about 40% of MBAs,3 they number only a slim 5% of Fortune 500 CEOs and 17% of board members—numbers that have barely moved in decades.4 These statistics are more than just a sign that women are missing out on opportunities. For years, external research has shown the financial benefits that accrue to companies that promote gender equality.5 A commitment to gender equality can also help fuel employee engagement and higher corporate growth rates. Everyday moments of truth: Frontline managers are key to women’s career aspirations. Women’s earnings, 1979–2011 : The Economics Daily. Women’s earnings, 1979–2011 November 23, 2012 Between 1979 and 2011, the earnings gap between women and men narrowed for most age groups. 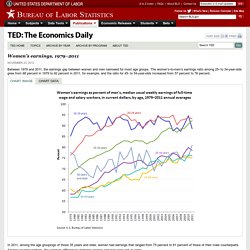 The women’s-to-men’s earnings ratio among 25- to 34-year-olds grew from 68 percent in 1979 to 92 percent in 2011, for example, and the ratio for 45- to 54-year-olds increased from 57 percent to 76 percent. In 2011, among the age groupings of those 35 years and older, women had earnings that ranged from 75 percent to 81 percent of those of their male counterparts. Among younger workers, the earnings differences between women and men were not as large. At each level of education, women aged 25 years and older have fared better than men with respect to long-term earnings growth.

On an inflation-adjusted basis, earnings for women with a college degree have increased by 31 percent since 1979, while those of male college graduates have risen by 16 percent. These data are from the Current Population Survey. Stopping the Mid-Career Crisis. Organizations need talent more than talent needs them. 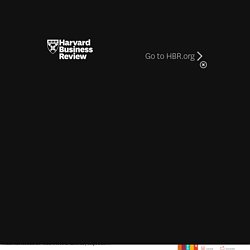 Mid-career professionals weigh this truism as they consider ways to align their desires with their future career aspirations. These professionals seek new opportunities through career change in order to meet personal goals and to increase the likelihood of advancement, and changing one’s career is closely associated with renewed career commitment and job satisfaction. ANT Therapy. Introduction Our overall mind state has a certain tone or flavor based largely on the types of thoughts we think. 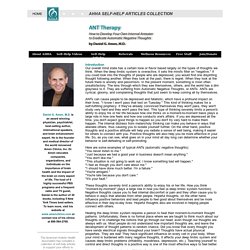 When the deep limbic system is overactive, it sets the mind's filter on "negative. " If you could look into the thoughts of people who are depressed, you would find one dispiriting thought following another. When they look at the past, there is regret. When they look at the future there is anxiety and pessimism. In the present moment, something is most often unsatisfactory. ANTs can cause people to be depressed and fatalistic, which have a profound impact on their lives. ANT Therapy. Sign in - Google Accounts. Self-Efficacy (Bandura – 1977) The theory of self-efficacy, as presented by Bandura (1977a), was outlined as a theoretical framework “in which the concept of self-efficacy is assigned a central role, for analyzing changes achieved in fearful and avoidant behavior” (p. 193). 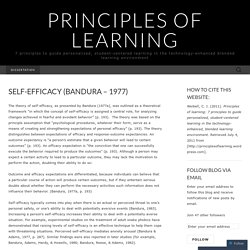 The theory was based on the principle assumption that “psychological procedures, whatever their form, serve as a means of creating and strengthening expectations of personal efficacy” (p. 193). The theory distinguishes between expectations of efficacy and response-outcome expectancies. An outcome expectancy is “a person’s estimate that a given behavior will lead to certain outcomes” (p. 193).

An efficacy expectation is “the conviction that one can successfully execute the behavior required to produce the outcomes” (p. 193). Although a person may expect a certain activity to lead to a particular outcome, they may lack the motivation to perform the action, doubting their ability to do so: In contrast, people “who doubt their capabilities” (p. 2): Women_education_workforce.pdf.

Applied Psychology - Early View. BobCat. Clinical perfectionism: a cognitive–behavioural analysis. Department of Psychiatry, Warneford Hospital, Oxford University, Oxford, OX3 7JX, UK Accepted 25 April 2001, Available online 22 May 2002 Choose an option to locate/access this article: Check if you have access through your login credentials or your institution Check access Get rights and content Abstract This paper reviews the characteristics of clinical perfectionism and proposes a new definition of the phenomenon. 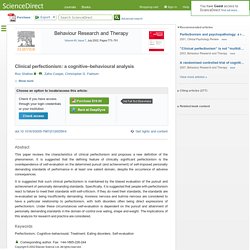