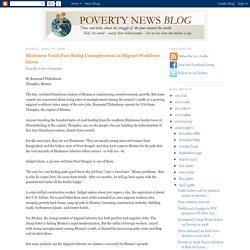 But some experts are concerned about rising rates of unemployment among the country's youth as a growing migrant workforce takes many of the new jobs. Concern over Bhutan suicide rate. The authorities in the Himalayan kingdom of Bhutan say that they are increasingly worried about a recent spate of suicides. 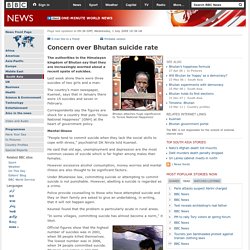 Last week alone there were three suicides of two girls and a man. The country's main newspaper, Kuensel, says that in January there were 15 suicides and seven in February. Correspondents say the figures are shock for a country that puts "Gross National Happiness" (GNH) at the heart of government policy. PressReader.com - Connecting People Through News. Bhutan: The World's Happiest Country. It is hard to imagine that such a small country, the size of Indiana with the population of Alaska, tucked in the Himalaya Mountains, accessible only by two airplanes, is the “Happiest Country” in the world, the last standing Buddhist Kingdom and has one of the fastest growing GDP’s in the world. 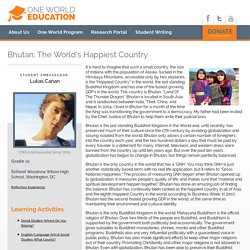 This country is Bhutan, “Land Of The Thunder Dragon.” Bhutan is located in South Asia and is landlocked between India, Tibet, China, and Nepal. History of Bhutan - Lonely Planet Travel Information. Bhutan’s early history is steeped in Buddhist folklore and mythology; it features tremendous deeds and beings with supernatural powers. 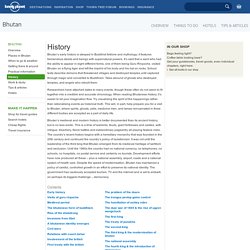 It’s said that a saint who had the ability to appear in eight different forms, one of them being Guru Rinpoche, visited Bhutan on a flying tiger and left the imprint of his body and his hat on rocks. School texts describe demons that threatened villages and destroyed temples until captured through magic and converted to Buddhism. Tales abound of ghosts who destroyed temples, and angels who rebuilt them. Researchers have attached dates to many events, though these often do not seem to fit together into a credible and accurate chronology. When reading Bhutanese history, it’s easier to let your imagination flow. Bhutan’s medieval and modern history is better documented than its ancient history, but is no less exotic. Early history The kingdom of Cooch Behar, in what is now West Bengal, influenced Bhutan from the early days. EvanRevak. King of Tiny Bhutan Steps Down Early to Make Way for Son. Bhutan at a Crossroads. Nestled in the soaring eastern himalayas between Tibet and India, Bhutan is one of the happiest countries on Earth. 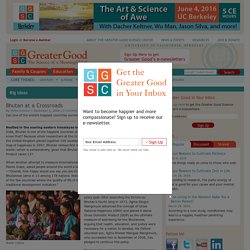 How do we know that? Because when researchers at the University of Leicester in the United Kingdom pieced together 100 studies to create the first world map of happiness in 2007, Bhutan ranked first in Asia and eighth in the world—which is extraordinary, given that Bhutan’s Gross Domestic Product ranks 137. When another attempt to measure international happiness, the Happy Planet Index, asked people around the world a simple question—“Overall, how happy would you say you are these days?” —the Bhutanese came in 13 among 178 nations. Tourism Council of Bhutan (Official Website) 1. 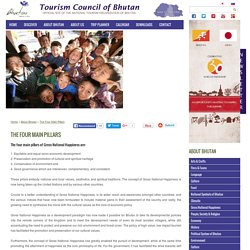 Equitable and equal socio-economic development 2. Preservation and promotion of cultural and spiritual heritage 3. Conservation of environment and 4. Good governance which are interwoven, complementary, and consistent. These pillars embody national and local values, aesthetics, and spiritual traditions. Bhutan Happiness Index: Buddhist Country Fails On Its 'Gross National Happiness' THIMPHU, Bhutan (RNS) In a country that prides itself on measuring quality of life in terms of “Gross National Happiness,” this small Buddhist kingdom in the Himalayas seems to have a problem: at least half its citizens aren’t happy, according to its own measurements. 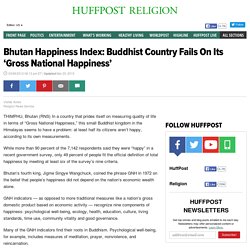 While more than 90 percent of the 7,142 respondents said they were “happy” in a recent government survey, only 49 percent of people fit the official definition of total happiness by meeting at least six of the survey’s nine criteria. Bhutan’s fourth king, Jigme Singye Wangchuck, coined the phrase GNH in 1972 on the belief that people’s happiness did not depend on the nation’s economic wealth alone. GNH indicators — as opposed to more traditional measures like a nation’s gross domestic product based on economic activity — recognize nine components of happiness: psychological well-being, ecology, health, education, culture, living standards, time use, community vitality and good governance. 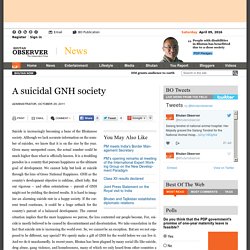 Al­though we lack ac­cu­rate in­for­ma­tion on the num­ber of sui­cides, we know that it is on the rise by the year. Given many un­re­ported cases, the ac­tual num­ber could be much higher than what is of­fi­cially known. Bhutan's youth struggle in kingdom of happiness. THIMPHU, Bhutan (AFP) – It is known as "the last Shangri-La" -- a remote Himalayan nation, rich in natural beauty and Buddhist culture, where national happiness is prioritised over economic growth. 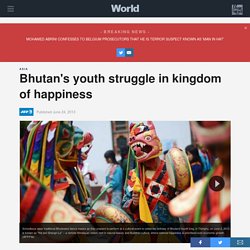 But urban youngsters in the kingdom of Bhutan are quick to challenge its rosy reputation. "We can see the people are not happy," said Jigme Wangchuk, a social worker and recovered drug addict in the capital Thimphu, where he works at a drop-in centre for young substance abusers. "We are facing so many challenges, where many people are suffering," the 24-year-old told AFP. Drinking, especially home-brewed rice wine, has long been part of Bhutanese culture, but alcohol liver disease has become one of the top killers at Thimphu's main hospital, a National Statistics Bureau report said last year. Increasing drug abuse by young people, especially of pharmaceuticals, has also become a major concern as modernisation takes hold in what was one of the world's most isolated countries for centuries. I wonder and i still need answers...: Youth unemployment in Bhutan.

“Future of the nation lies in the hands of our youth”, His majesty Jigme Khesar Namgyel Wangchuk, Cliché as it may sound but the word of the wise never gets old and wrong. 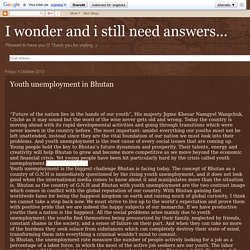 Today the country is moving ahead with its rapid developmental activities and going through transitions which were never known in the country before. The most important: amidst everything our youths must not be left unattended, instead since they are the vital foundation of our nation we must look into their problems. Cult attraction: Aum Shinrikyo's power of persuasion. On the morning of March 20, 1995, members of the Aum Shinrikyo (Supreme Truth) doomsday cult carried out the deadliest act of domestic terrorism in the postwar era, releasing a toxic nerve gas that killed 13 and injured thousands during the rush-hour in Tokyo.

Notification You’ve reached your story limit as a non-registered user. To read more, please sign up or log in via one of the services below. This will give you access to 15 additional stories this month. Already a member or digital subscriber? The Role of Political Millennialism in Early American Nationalism. Impact Factor:1.149 | Ranking:Political Science 47 out of 161 Source:2014 Journal Citation Reports® (Thomson Reuters, 2015) Political Research Quarterlyprq.sagepub.com. Jesus of Siberia. Four thousand feet up a mountain deep in the Siberian taiga, the middle-aged man appears in a velvet crimson robe, long brown hair framing a beatific smile. He sits down in a log cabin perched on the brow of the hill. It is a room with a stunning view. Review of Cults and New Religious Movements: A Reader, Edited by Lorne L. Dawson on JSTOR.

Deprogramming. Dissatisfied liberal Mormons find refuge in the Community of Christ. At a recent gathering of 21,000 Mormon women and girls, church officials all but avoided the elephant in the room: growing pressure from vocal members to expand women’s roles. Instead, messages at the General Women’s Meeting, which took place on 26 September, were about faith, happiness and purity. While it refuses to budge on the big issue of women’s ordination, the Church of Jesus Christ of Latter-day Saints (Mormon church) has made a few concessions to its feminist dissenters.

This essay may not be resold, reprinted, or redistributed for compensation of any kind without prior written permission. Please contact The Hedgehog Review for further details. Last year The Economist published a special report not on the global financial crisis or the polarization of the American electorate, but on the era of big data. Article after article cited one big number after another to bolster the claim that we live in an age of information superabundance. 5 Things You Didn't Know About Apple's '1984' Super Bowl Ad (Like How It Almost Didn't Air) Auto. Apple’s Iconic Super Bowl Ad: Why It Still Matters. A recent article in Slate accused Apple of creating both the best and worst Super Bowl ads of all time. Walker. Review on JSTOR.

Globalism. Manfred B. Steger (2005) Globalism (2nd ed.): Market Ideology Meets Terrorism. Lorne L. Dawson. Lorne L. Benjamin Barber: Why mayors should rule the world. Taking on Hollywood. In China, it's usually forbidden to shoot films in The Forbidden City. So an enterprising former farmer built his own movie set version, part of what is now the world's largest movie lot. It was a gamble that paid off, because China's film industry has grown so big so fast, that it is now looking to compete with Hollywood. CBS News correspondent Holly Williams reports from China in her first 60 Minutes story to be broadcast Sunday, April 10 at 7 p.m.