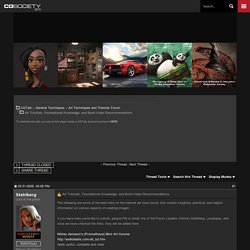 An Artist Grown: Reflections on Being a Video Game Art Director. As the studio art director at a video game development studio and publishing house, I oversee the art quality of all the games the company develops and publishes, including advertising and publishing material. 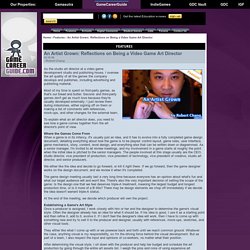 Most of my time is spent on first-party games, as that's our bread and butter. Second- and third-party games don't get as much love because they're usually developed externally; I just review them during milestones, either signing off on them or making a list of comments with references, mock-ups, and other changes for the external team. To explain what an art director does, you need to see how a game comes together from the art director's point of view. Ben Mathis. Put your money where your mouth is -Ben Mathis I've always liked the saying, “You can talk the talk, but can you walk the walk?”. 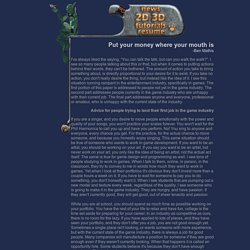 I see so many people talking about this or that, but when it comes to putting actions behind their words, they can't be bothered. The amount of action you take to bring something about, is directly proportional to your desire for it to exist. If you take no action, you don't really desire the thing, but instead like the idea of it. I see this situation running rampant in the entertainment industry, specifically in games. Advice for people trying to land their first job in the game industry If you are a singer, and you desire to move people emotionally with the power and quality of your songs, you won't practice your scales forever.

While you are at school, you should spend as much time as possible working on your portfolio. I've had some students ask me how many characters or environment pieces to have in a portfolio before applying places. How-to Start and Run a Business by Envato Tuts+ Envato Studio - WordPress Customization to Logo Design and more.

Your Rate - A better way to calculate your freelance rate. How to succeed as a creative long term: know your C.O.D.B. There are four letters out there (an acronym to be exact) that have the potential to literally shape your future as a creative, and to determine whether or not you will be able to stay in business long term. 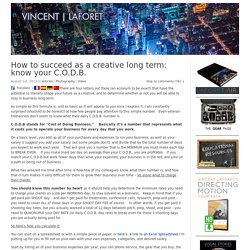 As simple as this formula is, and as basic as it will appear to you once I explain it, I am constantly surprised (shocked to be honest!) At how few people pay attention to this simple number. Even veteran freelancers don’t seem to know what their daily C.O.D.B. number is. C.O.D.B stands for "Cost of Doing Business. " Basically it’s a number that represents what it costs you to operate your business for every day that you work. Ryan Kingslien. Disney Animators At Work. James Turner - The Nintendo Wiki - Wii, Nintendo DS, and all things Nintendo - Wikia. James Turner is a video game developer. 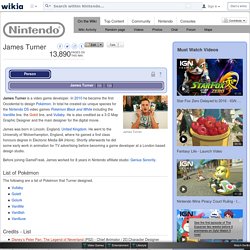 In 2010 he became the first Occidental to design Pokémon. In total he created six unique species for the Nintendo DS video games Pokémon Black and White including the Vanillite line, the Gobit line, and Vullaby. He is also credited as a 3-D Map Graphic Designer and the main designer for the digital movie. Most recent interview about Pokemon designs. - Pokemon Black Version Message Board for DS. This is old, but I don't think it was ever posted here. 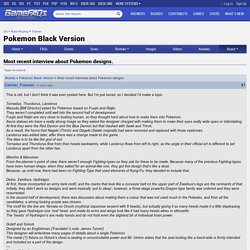 But I'm just bored, so I decided I'd make a topic. Tornadus, Thundurus, Landorus Masuda [BW Director] asked for Pokemon based on Fuujin and Raijin.They weren’t completed until well into the second half of development. Fuujin and Raijin are very close to looking human, so they thought hard about how to make them into Pokemon.Asura statues etc have a really strong image so they asked the designer charged with making them to make their eyes really wide open or intimidating.

At first they were the Red Demon and the Blue Demon but that clashed with Sawk and Throh.As a result, the horns that Nageki (Throh) and Dageki (Sawk) originally had were removed and replaced with those eyebrows.Landorus was added later, after there was a change made to the game. Mienfoo & Mienshao From the planner’s point of view, there weren’t enough Fighting-types so they ask for these to be made. 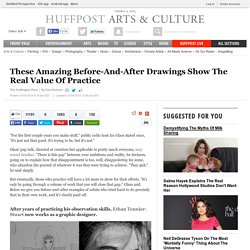 Starving Is A Terrible Condition For Making Art. The myth of the starving artist is a pervasive one. 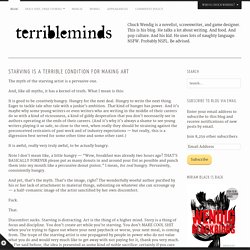 And, like all myths, it has a kernel of truth. What I mean is this: It is good to be creatively hungry. Hungry for the next deal. Media Hygiene: The Seven Healthy Habits of Highly Effective Freelance Artists. While advice on these topics is valuable for the freelance artist, anyone who finds it a challenge to work independently at home will appreciate these SEVEN simple points as essential to your health and well-being. 1) Get 8 hours sleep. 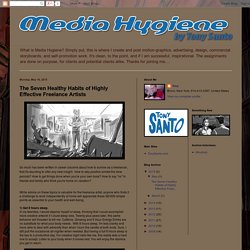 In my twenties, I would deprive myself of sleep, thinking that I could accomplish more creative artwork if I could sleep less. Twenty-plus years later, this same behavior will threaten to kill me. Caffeine, Ginseng and 5 Hour Energy Drinks are no substitute for what your body needs. I think I have this syndrome where I like art better than real life. Crimson Daggers. Livestream App. HP - O' Children by YoukaiYume on deviantART. 100 Wise Words For Everyone. Number 28 Is Gold.

Super Obvious Secrets That I Wish They’d Teach In Art School at Phil McAndrew Illustrations & Comics. I get a lot of emails from illustration students and young cartoonists. 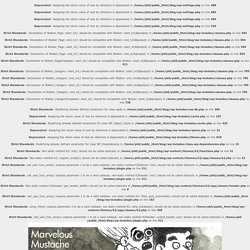 Sometimes they ask to interview me for a class assignment, sometimes they’re recent graduates looking for advice on how to transition from art student to professional illustrator/cartoonist. NewHive. The Ultimate Guide to Good Figure Drawing Reference. Yes it is and it is long overdue. I’ve been asked countless times by students, friends and artists in training about getting good reference for figure drawing and head drawing studies.

With the unfortunate lack of a centralized and well organized image gallery, it’s about damn time this issue is settled once and for all. I’ve posted some of my personal reference collection here in one place, also known as The Official Freshdesigner Good Reference Gallery (GRG). There’s a ton of great reference I’ve personally gathered and hand-picked from various sources. In the section ‘Where To Find Good Reference‘, I’ve listed the best photographers, websites and books that I know of. Focused Practice: An Exercise for Real Improvement in 33 days. Simply sitting down and banging out a few gesture drawings every day is a great way to stay in drawing shape, but it will rarely propel you to a new level of artistic achievement.