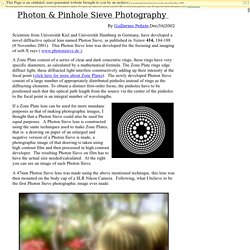 This Photon Sieve lens was developed for the focusing and imaging of soft-X rays ( www.photonsieve.de ). A Zone Plate consist of a series of clear and dark concentric rings, these rings have very specific diameters, as calculated by a mathematical formula. The Zone Plate rings edge diffract light, these diffracted light interfere constructively adding up their intensity at the focal point (click here for more about Zone Plates). If a Zone Plate lens can be used for more mundane purposes as that of making photographic images, I thought that a Photon Sieve could also be used for equal purposes.

A 47mm Photon Sieve lens was made using the above mentioned technique, this lens was then mounted on the body cap of a SLR Nikon Camera. Shoebox Camera. The Comprehensive Tech Guide To Pinhole Photography. If you’re somebody who likes to take film photographs, you know the satisfaction you get from a film photo that you just don’t feel when you use digital. 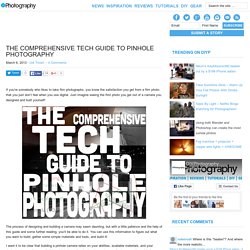 Just imagine seeing the first photo you get out of a camera you designed and built yourself! The process of designing and building a camera may seem daunting, but with a little patience and the help of this guide and some further reading, you’ll be able to do it. You can use this information to figure out what you want to build, gather some simple materials and tools, and build it! I want it to be clear that building a pinhole camera relies on your abilities, available materials, and your desired outcome. 34 Month Long Exposure With A Pinhole Camera. A lot of cameras have the long-exposure function that captures movement in a picture over a small period of time, and they are known as hard-to-shoot photos. 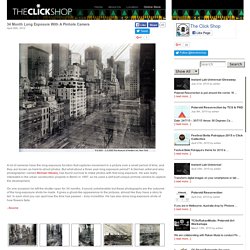 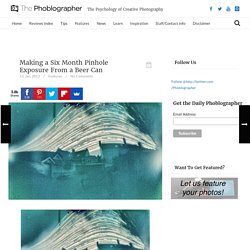 The photo above is a six month long exposure using a beer can converted into a pinhole camera. Pinhole photography is amongst the earliest forms of the craft, and it is practiced by many still even today. We’ve reviewed pinhole adapters for mirrorless cameras before and we’ve even taken part of World Pinhole Day: a once a year festival that celebrates all things pinhole. To learn more about his project and pinhole photography, we briefly talked with Matt about his vision, calculations, etc. Phoblographer: How did you catch the photography bug and how long have you been shooting? Matt: I was introduced to photography in the mid 1980s when I was about 12 or 13 as I had an uncle who was a keen photographer and had a black and white darkroom in his garden shed. Mark Tweedie – Pinhole photography. Fine Art Pinhole Photography by Vladimir Zivkovic. Multiple Apertures – pinhole camera. Reader Spotlight: Steve Irvine. "Ceramic Camera — Copper" © Steve Irvine Potter and photographer Steve Irvine has found a unique and beautiful way to combine these two artistic passions: self-crafted ceramic pinhole cameras. 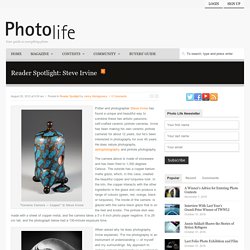 Angles, The building and Constitution on Pinterest. The Showcase of Beautiful Pinhole Photography. Today, too many websites are still inaccessible. 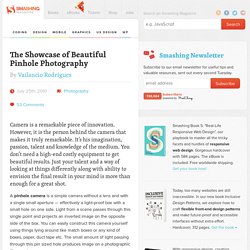 In our new book Inclusive Design Patterns, we explore how to craft flexible front-end design patterns and make future-proof and accessible interfaces without extra effort. Hardcover, 312 pages. Get the book now → Camera is a remarkable piece of innovation. However, it is the person behind the camera that makes it truly remarkable. Next Best Thing Pinhole Project. Pinhole Resource - Home. Untitled Document. History Jon Grepstad. - Possible the best history of pinhole on the web. 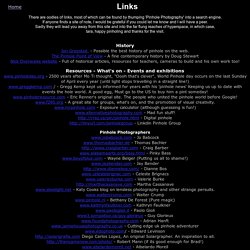 The Pinhole Point of View - A fine contemporary history by Doug Stewart Nick Dvoraceks website - Full of historical articles, resources for teachers, cameras to build and his own work too! Resources - What's on - Events and exhibitions www.pinholeday.org - 2500 years after Mo Ti thought, "Oooh that's clever", World Pinhole day occurs on the last Sunday of April every year (until light stops travelling in a straight line!) Www.greggkemp.com / - Gregg Kemp kept us informed for years with his 'pinhole news' Keeping us up to date with events the hole world.

A good egg, Must go to the US to buy him a pint someday! Www.pinholeresource.com - Eric Renner's original site. Pinhole Resource Collection. Photography Through My Eyes. Currently I have been looking at Pinhole photography and how to make my own pinhole camera. 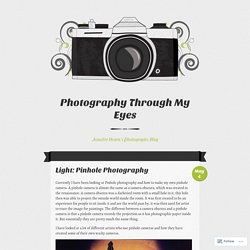 A pinhole camera is almost the same as a camera obscura, which was created in the renaissance. A camera obscura was a darkened room with a small hole in it, this hole then was able to project the outside world inside the room. It was first created to be an experience for people to sit inside it and see the world pass by, it was then used for artist to trace the image for paintings. Julie Schachter's Photo Website. Pinhole Portrait. Alyson Belcher “My work combines pinhole photography with improvisational performance, and stems from the idea that everything we experience is stored somewhere in our bodies. 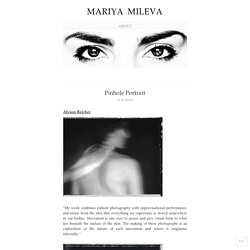 Movement is one way to access and give visual form to what lies beneath the surface of the skin. The making of these photographs is an exploration of the nature of each movement and where it originates internally.” Sonia Jach Katie Cooke. Behance. 360-Degree Views. Home Gallery Bio Print Purchase. 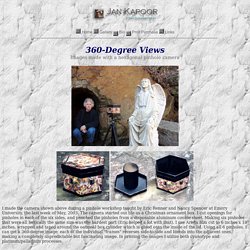 Studioartphotography - Pinhole Photography. EQUIPMENT:Light tight containerShutter (tape/cardboard)Photographic Paper/FilmBlack Matte paintNeedle (sharp implement for making pinhole)Sheet metal (small square - 2cm sufficient)SandpaperDarkroom with developing equipment (developer, fixer, stop, water bath and tongs)WHAT IS PINHOLE PHOTOGRAPHY? Pinhole Photography (also known as camera obscura) is one of the simplest forms of photography. It's cheap and really easy to make your camera. ...all you need is a box with a tiny hole in it! To create your pinhole camera, all you need is a light tight container. This could be an old shoe box, Milo tin or any shape container you have lying around (different sizes and shapes will produce different effects).

Paint the interior of the container matte black and at one end of the container make a hole (approximately 1cm in diameter). Special reports. Steven Pippin's flat on a busy road in south London has bare boards and peeling plaster walls. In the corner of one room, a mattress is rolled up; otherwise, there is no furniture except two chairs, on which we sit, a workbench piled with drills and saws, and a series of Pippin's remarkable sculptural inventions. The inventions look like astronomical instruments: huge Galileo-style globes on galvanised supports that fill each room.

In the centre of one glass sphere, a television is revolving. Nancy Breslin's pinhole camera exposure tips. I am sometimes asked how I determine the exposure for my pinhole photographs, taken with my Zero Image camera. First, I use a hand-held light meter to get a reading. I then use a conversion wheel on the back of the camera to determine the time for the camera's aperture of f/138. For instance, if I get a reading of f/8 and 1/2 second, then at f/138 the time would be about two minutes (f/8 to f/138 is about 8 stops less light, and 1/2 second to 2 minutes is 8 stops more light).

Then I use a table to compensate for reciprocity failure (the fact that, beyond a second or so, film will be underexposed if you use the predicted time - the amount of underexposure depending on the type of film). After trial and error I recommend the following settings for TMax 400 film: predicted time 2s 5s 10s 15s 20s 30s 1min 2min 4min 10min actual time 4s 14s 30s 1min 80s 2m 4m 9m 20min 1hour. Slowlight - a pinhole blog. Print sale: pictures are an education Originally uploaded by heyoka. I’m offering a number of handmade silver prints, made from pictures in this set, for a reduced price for the next few weeks… I’m currently studying to finish a long-paused degree, having picked it up again after a gap of twenty years.

Unfortunately, I’m a bit short of funds and so need to raise the necessaries or put the studies on hold for another year. I’m hoping to start my next course, in art history, so that I can go on and apply to study for a masters. Research: pinhole photography and long night... Creating a Pinhole Camera with 25 Pinholes Using a Shoebox. Pinhole cameras are fun! Most of the cameras are often made from the most quirky things. We found a spam can, a shoebox, and we recently saw that a beer can can create some really beautiful and artistic images. But we ran into the coolest thing recently on Believe in Film. James Guerin created a truly extraordinary pinhole camera with 25 pinholes. The effect is something similar to what Andy Warhol has done before with overlapping combined with Picasso’s cubism. We had some time to geek out with him about it and talk about how one can use this creatively.

Phoblographer: How did you make the camera and how does it work? James: I made the camera out of an 8×10″ shoe box and some sheets of card-board which I used to make the grid that sits inside the camera. The grid was 5 rows by 5 columns making 25 separate cells. Camera Tinkerer James Guerin and His Panoramic Pinhole · Lomography. PinholeSm. Pinky Bass - Alchetron, The Free Social Encyclopedia. Pinky M. M. 47 pin hole photography printing. Camera Daze. A five year plan to build camera obscuras in Birmingham. (Slightly late now) Festive Greetings from Jenny and Pete Happy New Year! A five year plan to build camera obscuras in Birmingham. Build an Anamorphic Pinhole Camera. The science of pinholes is covered in my previous Instructable if you are new to pinhole cameras I recommend you read this Instructable before continuing if you want to fully grasp the concepts shown here.

Now that you've seen the results, you're probably pretty confused. I'll do my best to explain whats going on here but it is very unconventional. Design and Build your own Pinhole Camera. The Battlefield Pinhole Camera. Miroslav Tichy - reclusive photo-vouyeur. My friend, photographer Ron Klein, having just returned from a trip along the Siberian railway with a Russian cohort, brought a cardboard camera to an IAPP meeting some years ago. It was constructed during the journey and was a medium format, panoramic camera that made impressive images as I recall. It was a well constructed piece of work intended to make fine, conventional images. Of course it is not uncommon for photographers to make their own cameras, whether they be sophisticated, special-purpose engineering marvels, converted mint tins or substantially modified extant cameras.

And then there are the various permutations of camera aesthetics that embrace all manner of imperfections from streaky plastic lenses to perpetual light leaks. The Reclusive Peeping Tom Photographer and his Cardboard Camera. Sisters of Mercy - Leonard Cohen. About Pinhole. Wondering about doing Pinholes? Wonder no more! · Lomography. World Pinhole Photography Day is fast approaching and now is the perfect opportunity to start pinholing – Once you get over any fear of the unknown, you’ll never look back, it’s so much fun! Cpbeyond. Ebooksclub org the beginner 039 s guide to pinhole photography. Taking Time with Heather Oelklaus and her Pinhole Camera Truck.

Imagining Music: The Work of Mabel Odessey. Music, like photography, is as much a science as art. When combined, magical things can happen. Without Lenses is pleased to share with you, the work of Mabel Odessey, a photographer whose work is inspired by and created through collaborations with musicians. The Piano Paille PInhole project is just the most recent. Mabel shares with us how she works with the musicians collaboratively, and where she is going next.