THE PROSTITUTION EXPERIENCE. The question of what is a representative prostitute is an important one. 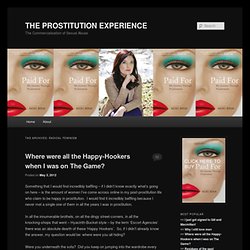 I will answer it based on my own lived experience of prostitution and what I saw to be representative of the women I worked with, both indoors and outdoors and at the upper, middle and lower ends of prostitutions social spectrum. I do so because there were certain commonalities between the lives and the attitudes of the women in all these areas of prostitution. Watch sexworkerspresent Episodes. About this original series Videos made by sex workers from around the world!

Sex Work is to Trafficking as Sex is to Rape. If you’ve been paying attention to the evolution of the current debates around sex work, you’ve probably noticed that more and more people are conflating sex work and trafficking. 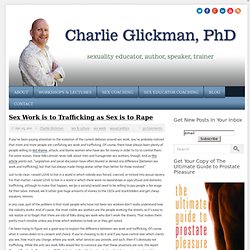 Of course, there have always been plenty of people willing to slut shame, attack, and blame women who have sex for money in order to try to control them. For some reason, these folks almost never talk about men and transgender sex workers, though. A Sex-Positive Perspective on Sex Work. Debates about sex work and trafficking aren’t new, but they sure are heating up these days. 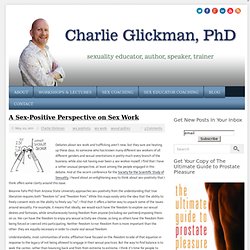 As someone who has known many different sex workers of all different genders and sexual orientations in pretty much every branch of the business, while also not having ever been a sex worker myself, I find that I have a rather unusual perspective, at least among the people engaged in this debate. And at the recent conference for the Society for the Scientific Study of Sexuality, I heard about an enlightening way to think about sex-positivity that I think offers some clarity around this issue. Breanne Fahs PhD from Arizona State University approaches sex-positivity from the understanding that true liberation requires both “freedom to” and “freedom from.”

While this maps easily onto the idea that the ability to freely consent rests on the ability to freely say “no”, I find that it offers a better way to unpack some of the issues around sexuality. Dear Tits and Sass: Escort Advertising Edition — Tits and Sass. Dear Tits & Sass, I’m an independent escort suddenly finding herself in transition after advertising on Backpage for a couple of years. 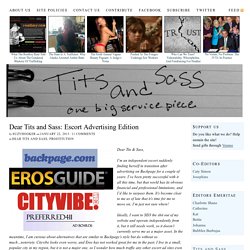 I’ve been pretty successful with it all this time, but that world has its obvious financial and professional limitations, and I’d like to surpass them. It’s become clear to me as of late that it’s time for me to move on; I’m just not sure where! Ideally, I want to SEO the shit out of my website and operate independently from it, but it still needs work, so it doesn’t currently serve me as a major asset. In the meantime, I am curious about alternatives that are similar to Backpage’s style but do without so much…notoriety. Lies, damned lies and sex work statistics. (Maggie McNeill is a retired call girl. 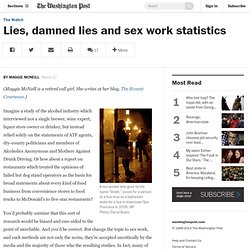 She writes at her blog, The Honest Courtesan.) A sex worker who goes by the name “Violet,” poses for a picture at a bus stop as a bystander waits for a bus in downtown San Francisco in 2008. (AP Photo/Darryl Bush) Imagine a study of the alcohol industry which interviewed not a single brewer, wine expert, liquor store owner or drinker, but instead relied solely on the statements of ATF agents, dry-county politicians and members of Alcoholics Anonymous and Mothers Against Drunk Driving.

Or how about a report on restaurants which treated the opinions of failed hot dog stand operators as the basis for broad statements about every kind of food business from convenience stores to food trucks to McDonald’s to five-star restaurants? Treating Sex Work as Work. When researchers taught capuchin monkeys how to use money, it didn’t take long for one of the male monkeys to offer a female one of the coins in exchange for sex.

Prostitution is often called “the world’s oldest profession” with good reason; it is a form of exchange that predates the human species, and has even been observed among chimpanzees. Males tend to want sex much more frequently than most females are willing to accommodate, and where a demand exists it is inevitable that some individuals will choose to meet it for a price. But because sex has traditionally been viewed as sacred, magical or otherwise special because of its ability to produce life, it has always been an area authoritarians felt especially compelled to enact restrictions upon; the fact that most of the sellers were female and most of the buyers male1 probably also had a lot to do with it, especially in pre-modern times when virtually all political power was concentrated in the hands of the client class.

Why Prostitution Can Make More Sense Than Working at Walmart. Beyond Rescue. About the Author Noy Thrupkaew Noy Thrupkaew is a freelance writer based in New York City. 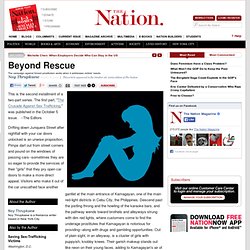 Also by the Author Do brothel raids help trafficking victims escape abuse, or skirt the reality that makes recovery so difficult for the "rescued? " Research support for this article was provided by the Investigative Fund at The Nation Institute. The Honest Courtesan. March 11, 2014 by Maggie McNeill Come children, let us shut up the box and the puppets, for our play is played out. - William Makepeace Thackeray, Vanity Fair As regular readers know, the chief organization crusading for imposition of the Swedish model on Ireland is Ruhama, the new mask worn by the orders of nuns who for centuries enslaved many thousands of women in the horrible Magdalene laundries. 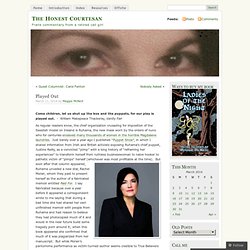 The Story Behind the Story. April 2, 2013 by Maggie McNeill You have brains in your head. 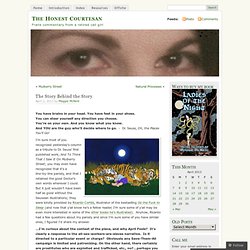 You have feet in your shoes. You can steer yourself any direction you choose. You’re on your own. And you know what you know. I’m a Happy Hooker — My Entrance Into the Sex Industry. Photo | “in the room where you sleep” www. gokturkayan.deviantart.com Even if the title of this article is only skimmed, it’ll surely evoke strong feelings.

Prostitution is a profession that people have strong and vocal opinions for. “Three common reasons women fall into this industry are daddy issues, drug addiction and student loans.” — Sylvery Gray, “Escorting is Fucking Stupid” Ins and outs of paying for sex. Nice to have mutual sex, isn’t it? Sure, but sometimes you might find yourself in a position where paying for it feels right. How do you know if trading cash for erotica is a boost to your body and spirit or a mental and physical drag? Will forking out for a fuck assist your voyage of self-discovery or block it? Like any other life behaviour, monetizing sex requires personal reflection.

We traveled to six Asian countries and to major cities in the U.S., interviewing sex workers, anti-prostitution activists, government officials, medical personnel, social workers, brothel owners, members of the military, religious leaders and even a few customers to write Casting Stones: Prostitution and Liberation in Asia and the United States. We did not expect to advocate for decriminalization, but that is where our research led us. Moral Judgments Interfere Many find sex work morally repugnant, but similar assessments could be made of other forms of work, such as the nuclear arms industry. Moral arguments that frame prostitution as sexual immorality see it from the perspective of its customers, and this focus on sex tends to make the subject religiously radioactive.

Category:Sex industry. A sanctuary for sex workers. ANATOMY OF A SEX SYMBOL by Sheila O’Malley. [Scarlet Ink's Cathouse of Content] Sign in. US Federal and State Prostitution Laws and Related Punishments - International Union of Sex Workers. Escort Site. Adult web design development Online Marketing SEO Packages-Escort Agencies. SEO For The Escort Industry in 2014 - The Notebook. SEO is a complicated business and one that is constantly changing. For any industry it’s a challenge, however simple search engine optimisation for the escort industry can be even harder. ON THE ISSUES: Works Hard For Her Money: Feminists and Prostitutes.