Repairing Vs. Replacing Your Highway Truck’s ECM. Should I repair or replace my highway’s truck ECM? 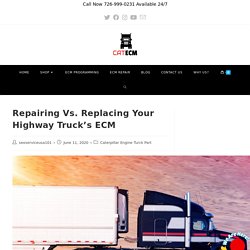 That’s one of the most frequently asked questions by truck owners who are suffering due to a poor engine performance of their vehicle. Some experts believe that repairing is the way to go, while others suggest that replacement is a better option. However, these “experts” must understand that it’s a very situation-based problem. It’s better to understand the root cause of the problem, evaluate the condition of the ECM, and take several factors into consideration before reaching a conclusion. The best way to determine which you should go for a repair or replacement is by getting the ECM inspected from a professional. Can ECM Remapping Boost Your Highway Truck’s Engine Performance? Engine Control Module (ECM) remapping is a tuning technique that’s used to optimize your truck for an altered set of performance standards than those intended originally. 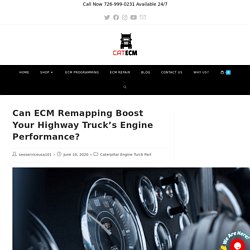 Usually, this is done to give your engine better fuel economy or better performance output. Due to the complex nature of the work, you should not attempt to carry out remapping yourself. Ways To Make Sure Electronic Control Module: Doesn't Fail. ECM Symptoms You Should Never Ignore to Ensure Your Semi Truck Engine Functions Effectively. The engine control module (ECM) is a brilliant innovation that has been helping semi truck owners to run their vehicles smoothly and cover long distances. 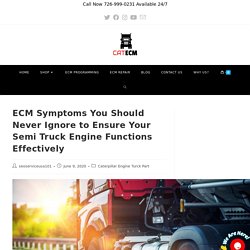 It’s a sophisticated piece of technology that optimizes the performance of your truck. However, like any other mechanical component, it can malfunction and require repairs, reprogramming, or replacement. Understanding CAT ECM Reprogramming: The Benefits and the Risks. Many automobile experts draw parallels between a human brain and engine control module (ECM), using the brain as an analogy—of course—to describe the importance and functionality of ECM. 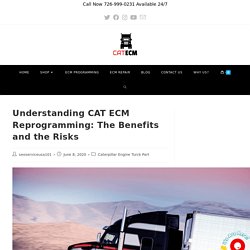 The ECM plays an instrumental role in ensuring optimal engine performance. It continuously collects data to ensure the efficient running of the vehicle. READ: 4 Problems That Can Be Solved By An ECM Reflash A bad ECM can affect the vehicle’s performance, resulting in poor fuel economy or even complete engine failure. Therefore, it’s crucial to get it reprogrammed by a professional. Understanding Your Caterpillar ECM. A Caterpillar engine control module (ECM) is an onboard computer that acts as the brain of your equipment or vehicle’s engine. 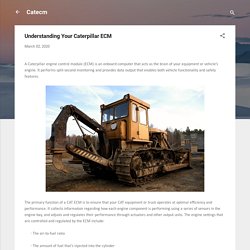 It performs split-second monitoring and provides data output that enables both vehicle functionality and safety features. The primary function of a CAT ECM is to ensure that your CAT equipment or truck operates at optimal efficiency and performance. It collects information regarding how each engine component is performing using a series of sensors in the engine bay, and adjusts and regulates their performance through actuators and other output units.

The engine settings that are controlled and regulated by the ECM include: · The air-to-fuel ratio · The amount of fuel that’s injected into the cylinder · Variable intake control · Exhaust gas recirculation. Caterpillar Marine Engine Maintenance Tips from the Pros - CatEcm. Owning a boat is a huge investment of money and labor. 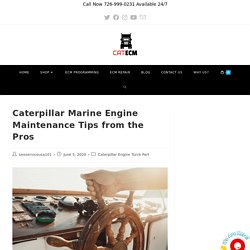 But if you’re up to the task, the whole exercise can be quite rewarding. To ensure smooth sailing, engine maintenance is something you can’t afford to ignore. Routine care and upkeep can prevent costly issues from developing down the line, which is why it’s best to stick to a regular maintenance schedule. Below, we’ve detailed some marine engine care tips based on advice from experienced boat owners. Use Antifreeze Antifreeze has certain thermal properties that keep the engine coolant from freezing. Additionally, antifreeze also comes in handy in warm climates where high temperatures can damage the engine. Keep the Battery Clean Many components in modern boats—such as lights, starting engines, radios, and other electronics—depend on electric batteries to function.

Regularly Inspect Battery Components Battery components should also be regularly inspected for damage so they can be replaced beforehand. 5 Tips on Keeping Your Semi Truck Engine Running Smoothly. Keeping your semi truck running smoothly is a crucial part of a trucking job. 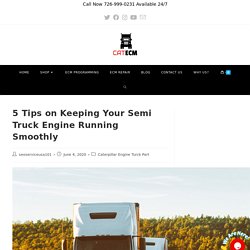 If your vehicle isn’t performing at its best, it can create several obstacles when you hit the road. ECM Remapping: What does it mean? If you have some basic knowledge about engines, you’re probably familiar with the term ‘engine remapping’. 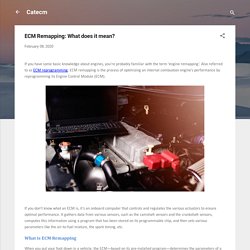 Also referred to as ECM reprogramming, ECM remapping is the process of optimizing an internal combustion engine’s performance by reprogramming its Engine Control Module (ECM). If you don’t know what an ECM is, it’s an onboard computer that controls and regulates the various actuators to ensure optimal performance. It gathers data from various sensors, such as the camshaft sensors and the crankshaft sensors, computes this information using a program that has been stored on its programmable chip, and then sets various parameters like the air-to-fuel mixture, the spark timing, etc. CATECM — Should I Replace or Repair my Caterpillar ECM? The Role of the ECM in Improving Engine Performance.

Back in the 70s, before the first engine management system was introduced, diesel engines relied on mechanical fuel delivery systems to produce power. 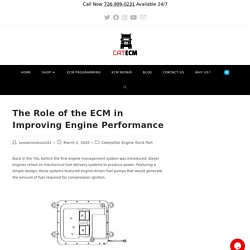 Featuring a simple design, these systems featured engine-driven fuel pumps that would generate the amount of fuel required for compression ignition. Mechanical fuel metering and delivery systems relied on mechanically connected components to set the air-to-fuel ratio. Although this was a simple system, it wasn’t efficient. If the mechanical components became worn out and damaged, it would upset the air-to-fuel ratio, which, in turn, would impact the engine’s performance, response and fuel-efficiency. However, as fuel prices rose and emission regulations became tighter, the need for more efficient engines grew—which led to the introduction of Engine Control Modules (ECM). How ECMs Unlocked the True Potential of the Diesel Engine ECMs also eliminated the need for inefficient mechanical fuel-metering systems.

Performance Improvements. 3 Ways to Boost Diesel Engine Performance. There’s a reason why large trucks and industrial equipment are fitted with diesel engines instead of gasoline ones. 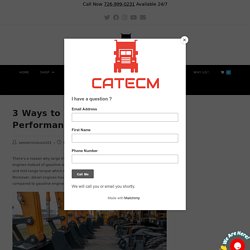 Diesel engines are known for producing loads of low and mid-range torque which makes them perfect for lifting and towing heavy loads. Moreover, diesel engines have a much simpler design and are generally more reliable compared to gasoline engines. However, years and years of heavy use can have a detrimental effect on the performance and efficiency of a diesel engine—and that’s a major concern for trucking, mining, and construction businesses that rely on diesel engine-powered vehicles and equipment to meet project deadlines.

Fortunately, there is a variety of effective ways to boost the performance of your diesel engine. Here are three of them. Taking the Forced Induction Route. Remanufactured Caterpillar ECMs and Their Benefits. If you’re purchasing a CAT ECM for the first time, you’re probably not sure about how much it costs, and if you should invest in a used, new or remanufactured unit. You need an ECM that’s not only perfectly compatible with your Caterpillar engine but is also capable of performing in harsh working environments and extreme weather conditions. Over the course of this blog post, we’ll discuss why a remanufactured Caterpillar ECM is the best option for you.

A Remanufactured CAT ECM Provides the Biggest Bang for Your Buck Brand new CAT ECMs can be quite expensive and buying one will have a major impact on your budget for equipment or industrial vehicles. For instance, a new CAT C15 ECM will cost you north of $3,000. Moreover, brand new CAT ECMs don’t come with pre-installed firmware. ECM Remapping: How it Can Make Your Business More Efficient. Back in the 1990s, fuel efficiency for mining and construction businesses often meant having fuel tanks large enough to run for 12 hours straight.

However, times have changed now. With diesel fuel prices averaging around the $3 per gallon mark, contractors are now realizing how much of an impact the fuel economy of their equipment has on margins. Many businesses rely on machines to get the job done. Whether you’re in construction, mining, or trucking—chances are you’re relying on an engine to do the hard work. Top 3 Reasons for CAT ECM Failure. Caterpillar is one of the world’s largest manufacturers of diesel engines and construction and mining equipment. The company currently sells its products in 180 different countries and caters to over 27 different industries. DIY ECM Programming: What You Need to Know. In the last two decades or so, engine design and engine management systems have evolved in a significant way. This is especially true with regard to diesel engines.

How Does An ECM Work? Common Reasons Why ECMs Fail. 5 Symptoms of a Faulty ECM. The engine control module is one of the most important components of any modern vehicle. Why You Shouldn’t Reprogram Your ECU Yourself. If you know anything about internal combustion engines, you’ve probably heard of the term ‘chip tuning’. As the story goes, an automotive software genius comes up with his laptop, plugs it into your engine, and BAM!

Your vehicle is suddenly much more powerful than before. The Advantages of an Engine Control Module. The Difference between ECM and PCM - Tech News & Trends. Whether you want your vehicle to perform better or want to understand why it isn’t running right, having some knowledge about on-board computers can also come in handy. When it comes to engine electronics, the terms PCM and ECM are often used interchangeably. However, both perform a different function. Over the course of this article, we’ll discuss how the ECM and PCM work, so you know how to troubleshoot your vehicle’s performance. CATECM — How the ECM Impacts Engine Performance.

The Features of ADEM II ECMs. What is an ECM?