The General Prologue - Translation. 13_4 Trephination An Ancient Surgery. Primitive cranial trephining, the surgical opening of the skull performed with primitive tools and techniques, is one of the most fascinating surgical practices in human history. 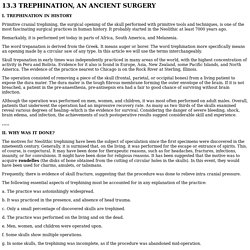 It probably started in the Neolithic at least 7000 years ago. Remarkably, it is performed yet today in parts of Africa, South America, and Melanesia. The word trepanation is derived from the Greek. It means auger or borer. The word trephination more specifically means an opening made by a circular saw of any type. Skull trepanation in early times was independently practiced in many areas of the world, with the highest concentration of activity in Peru and Bolivia. The operation consisted of removing a piece of the skull (frontal, parietal, or occipital bones) from a living patient to expose the dura mater.

Although the operation was performed on men, women, and children, it was most often performed on adult males. A. The Hole Story on Trepanation. Hippocrates endorsed its use and it’s the world’s second oldest surgical procedure following circumcision. 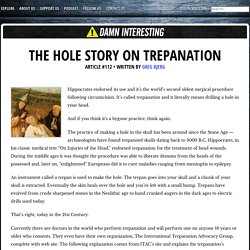 It’s called trepanation and it literally means drilling a hole in your head. And if you think it’s a bygone practice, think again. The practice of making a hole in the skull has been around since the Stone Age — archaeologists have found trepanned skulls dating back to 3000 B.C. Hippocrates, in his classic medical text “On Injuries of the Head,” endorsed trepanation for the treatment of head wounds. During the middle ages it was thought the procedure was able to liberate demons from the heads of the possessed and, later on, “enlightened” Europeans did it to cure maladies ranging from meningitis to epilepsy. An instrument called a trepan is used to make the hole.

That’s right, today in the 21st Century. Currently there are doctors in the world who perform trepanation and will perform one on anyone 18 years or older who consents. Perforated Skulls From Middle Ages Found in Spain - History in the Headlines. Two skulls with bore holes have been unearthed from a medieval cemetery in Spain. 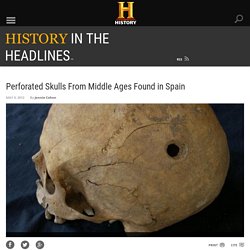 The individuals are thought to have undergone trepanation, an ancient brain surgery technique performed for both medical and ritualistic reasons since prehistoric times. Researchers believe one of the “patients” survived for quite awhile after experiencing the procedure. The oldest form of neurosurgery known to archaeologists, trepanation involves the removal of part of the skull with a sharp instrument in order to expose the brain. Its history stretches back to prehistoric times. Skulls up to 10,000 years old have been found throughout Europe, pierced by sharp stones such as flint and obsidian.

While physicians believed the operation could alleviate migraines, epilepsy, swelling and other brain disorders, it may have carried cultural rather than medical significance in certain societies. Researchers couldn’t determine whether the male “patient” underwent trepanation while still alive or after death. Malleus Maleficarum - The European Witch Hunters' Manual. By Jone Johnson Lewis The Malleus Maleficarum, written in 1486 - 1487 in Latin, is also known as "The Hammer of Witches," a translation of the title. 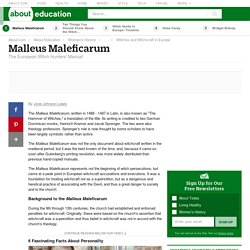 Its writing is credited to two German Dominican monks, Heinrich Kramer and Jacob Sprenger. The two were also theology professors. Sprenger's role is now thought by some scholars to have been largely symbolic rather than active. The Malleus Maleficarum. The Malleus Maleficarum (The Witch Hammer), first published in 1486, is arguably one of the most infamous books ever written, due primarily to its position and regard during the Middle Ages. 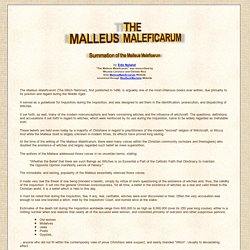 It served as a guidebook for Inquisitors during the Inquisition, and was designed to aid them in the identification, prosecution, and dispatching of Witches. It set forth, as well, many of the modern misconceptions and fears concerning witches and the influence of witchcraft. The questions, definitions, and accusations it set forth in regard to witches, which were reinforced by its use during the Inquisition, came to be widely regarded as irrefutable truth.

Those beliefs are held even today by a majority of Christians in regard to practitioners of the modern "revived" religion of Witchcraft, or Wicca. "Whether the Belief that there are such Beings as Witches is so Essential a Part of the Catholic Faith that Obstinacy to maintain the Opposite Opinion manifestly savors of Heresy. " The Malleus Maleficarum. The Malleus Maleficarum The Malleus Maleficarum “The Hammer of the Witches” is a book that outlines the characteristics of “witches,” how to “interrogate” them and what their punishment should be. 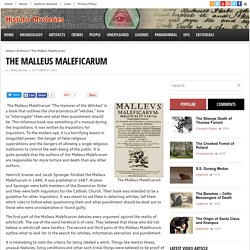 This infamous book was something of a manual during the Inquisitions. It was written by Inquisitors for Inquisitors.