Our Miss Brooks Radio Show. Our Miss Brooks was a hit on radio from the outset; within eight months of its launch as a regular series, the show landed several honors, including four for Eve Arden, who won polls in four individual publications of the time. 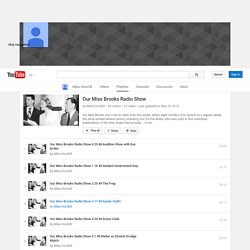 Arden had actually been the third choice to play the title role. Harry Ackerman, at the time CBS's West Coast director of programming, wanted Shirley Booth for the part, but as he told historian Gerald Nachman many years later, he realized Booth was too focused on the underpaid downside of public school teaching at the time to have fun with the role. Lucille Ball was believed to be the next choice, but she was already committed to My Favorite Husband and didn't audition. Then CBS chairman Bill Paley, who was friendly with Arden, persuaded her to audition for the part. The Betty Witherspoon Show. A Life Of Bliss. Incredible but True. Secret Agent K7. Sherlock Holmes With Carleton Hobbs and Norman Shelly. The Kenneth Williams Playhouse. Journey into Space. Sherlock Holmes: John Stanley - Dr. Watson: Alfred Shirley. 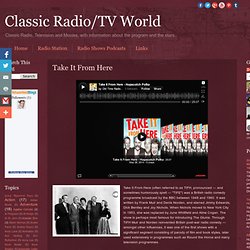 It was written by Frank Muir and Denis Norden, and starred Jimmy Edwards, Dick Bentley and Joy Nichols. When Nichols moved to New York City in 1953, she was replaced by June Whitfield and Alma Cogan. Classic Radio/TV World: Radio Station. Over 51 hours of Sherlock Holmes Radio Shows. 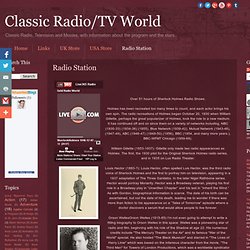 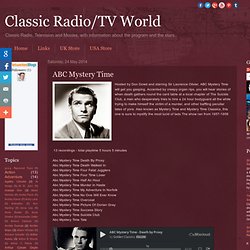 Accented by creepy organ rips, you will hear stories of when death gathers round the card table at a local chapter of The Suicide Club, a man who desperately tries to hire a 24 hour bodyguard all the while trying to make himself the victim of a murder, and other baffling peculiar tales of yore. The Green Hornet Radio Series. Classified as a juvenile crime drama but written and acted with more adult style than most of the breed, "The Green Hornet"---whose protagonist fought crime by infiltrating or even partnering (initially) with known criminal operations, which deceive police into believing him a wanted criminal himself---was the creation of George W. 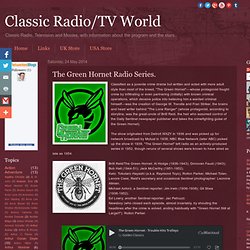 Trendle and Fran Striker, the brains and head writer behind "The Lone Ranger" (whose protagonist, according to storyline, was the great-uncle of Britt Reid, the heir who assumed control of the Daily Sentinel newspaper publisher and takes the crimefighting guise of the Green Hornet). The show originated from Detroit WXZY in 1936 and was picked up for network broadcast by Mutual in 1938; NBC Blue Network (later ABC) picked up the show in 1939. "The Green Hornet" left radio as an actively-produced series in 1952, though reruns of several shows were known to have aired as late as 1954.

Classic Radio/TV World. The Sound of Vincent Price: Vincent Price’s dramatic reading of The Raven by Edgar Allan Poe. Yours Truly, Johnny Dollar. Each story started with a phone call from an insurance executive, calling on Johnny to investigate an unusual claim. 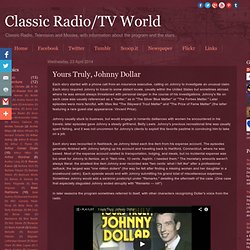 Each story required Johnny to travel to some distant locale, usually within the United States but sometimes abroad, where he was almost always threatened with personal danger in the course of his investigations. Johnny's file on each case was usually referenced as a "matter," as in "The Silver Blue Matter" or "The Forbes Matter. " Later episodes were more fanciful, with titles like "The Wayward Trout Matter" and "The Price of Fame Matter" (the latter featuring a rare guest-star appearance: Vincent Price). Johnny usually stuck to business, but would engage in romantic dalliances with women he encountered in his travels; later episodes gave Johnny a steady girlfriend, Betty Lewis.

Johnny's precious recreational time was usually spent fishing, and it was not uncommon for Johnny's clients to exploit this favorite pastime in convincing him to take on a job. Captain Midnight. Captain Midnight (later rebranded on television as Jet Jackson, Flying Commando) is a U.S. adventure franchise first broadcast as a radio serial from 1938 to 1949. 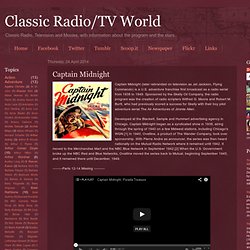 Sponsored by the Skelly Oil Company, the radio program was the creation of radio scripters Wilfred G. Moore and Robert M. Burtt, who had previously scored a success for Skelly with their boy pilot adventure serial The Air Adventures of Jimmie Allen. Developed at the Blackett, Sample and Hummert advertising agency in Chicago, Captain Midnight began as a syndicated show in 1938, airing through the spring of 1940 on a few Midwest stations, including Chicago's WGN.[1] In 1940, Ovaltine, a product of The Wander Company, took over sponsorship. The Black Museum. The Black Museum was a 1951 radio crime-drama program independently produced by Harry Alan Towers and based on real-life cases from the files of Scotland Yard's Black Museum. 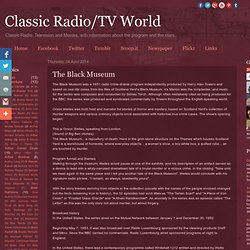 Ira Marion was the scriptwriter, and music for the series was composed and conducted by Sidney Torch. Although often mistakenly cited as being produced for the BBC, the series was produced and syndicated commercially by Towers throughout the English-speaking world. Orson Welles was both host and narrator for stories of horror and mystery, based on Scotland Yard's collection of murder weapons and various ordinary objects once associated with historical true crime cases. The show's opening began: This is Orson Welles, speaking from London. Program format and themes Walking through the museum, Welles would pause at one of the exhibits, and his description of an artifact served as a device to lead into a wryly-narrated dramatised tale of a brutal murder or a vicious crime.

The Green Hornet - The Citizenship Racket by Golden Classics.