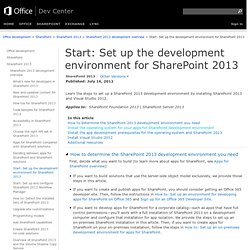 Applies to: SharePoint Foundation 2013 | SharePoint Server 2013 In any development environment, you should use a computer with an x64-capable CPU, and at least 16 GB of RAM to install and run SharePoint 2013; 24 GB of RAM is preferable. Depending on your specific requirements and budget, you can choose one of the following options: SharePoint 2013 requires your operating system to have certain prerequisites installed before installation begins. 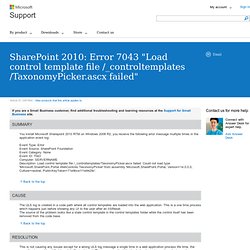 The ULS log is created in a code path where all control templates are loaded into the web application. This is a one time process which happens just before showing any UI to the user after an IISReset.The source of the problem looks like a stale control template in the control templates folder while the control itself has been removed from the code base. Note This is a "FAST PUBLISH" article created directly from within the Microsoft support organization. 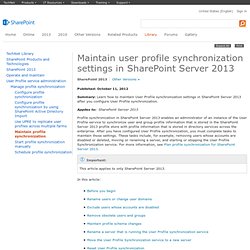 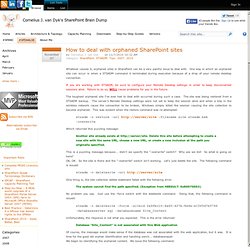 One way in which an orphaned site can occur is when a STSADM command it terminated during execution because of a drop of your remote desktop connection. If you are working with STSADM, be sure to configure your Remote Desktop settings in order to keep disconnected sessions alive. Failure to do so, WILL cause problems for you in the future. The toughest orphaned site I've ever had to deal with occurred during such a case. The site was being restored from a STSADM backup. Stsadm -o restore -url -filename site.stsadm.bak -overwrite Which returned this puzzling message: Another site already exists at Delete this site before attempting to create a new site with the same URL, choose a new URL, or create a new inclusion at the path you originally specified. 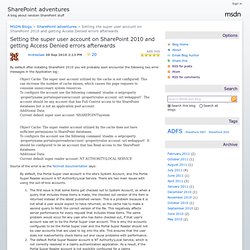 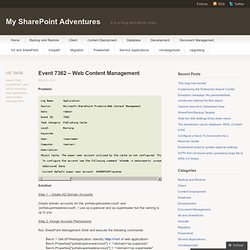 This can increase the number of cache misses, which causes the page requests to consume unneccesary system resources. To configure the account use the following command 'stsadm -o setproperty -propertyname portalsuperuseraccount -propertyvalue account -url webappurl'. The account should be any account that has Full Control access to the SharePoint databases but is not an application pool account. 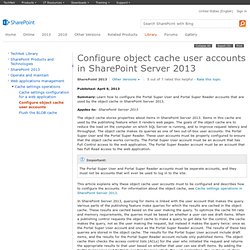 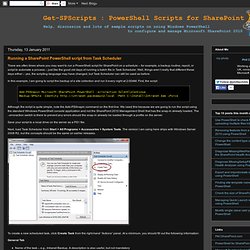 Well, things aren’t really that different these days either – yes, the scripting language may have changed, but Task Scheduler can still be used as before. In this example, I am going to script the backup of a site collection and run it every night at 2:00AM. First, the script: Add-PSSnapin Microsoft.SharePoint.PowerShell -erroraction SilentlyContinueBackup-SPSite -Identity -Path C:\Install\Intranet.bak –Force Although the script is quite simple, note the Add-PSSnapin command on the first line. Save your script to a local drive on the server as a PS1 file. Next, load Task Scheduler from Start > All Programs > Accessories > System Tools. To create a new scheduled task, click Create Task from the right-hand “Actions” panel. General Tab Triggers Tab. Add a content database (SharePoint Server 2010)