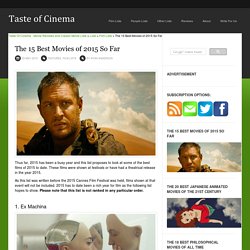 These films were shown at festivals or have had a theatrical release in the year 2015. As this list was written before the 2015 Cannes Film Festival was held, films shown at that event will not be included. 2015 has to date been a rich year for film as the following list hopes to show. Please note that this list is not ranked in any particular order. 1. Ex Machina Ex Machina is the a British science fiction thriller from screenwriter Alex Garland, making his directorial debut. Garland kept the budget as small as possible. Ex Machina was released in January in the UK, and then premiered in the United States at the South by Southwest Film Festival before a theatrical release on April 10 2015. 2. The film has received positive reviews and several awards since its premiere at Cannes, where it won a special prize. The 15 Greatest Movie Performances That Didn’t Receive Oscar Nominations (2010-2014) 8. 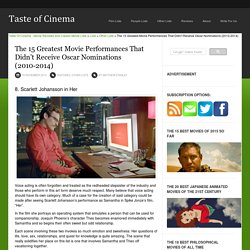 Scarlett Johansson in Her Voice acting is often forgotten and treated as the redheaded stepsister of the industry and those who perform in this art form deserve much respect. Many believe that voice acting should have its own category. Much of a case for the creation of said category could be made after seeing Scarlett Johansson’s performance as Samantha in Spike Jonze’s film, “Her”. In the film she portrays an operating system that simulates a person that can be used for companionship. Each scene involving these two invokes so much emotion and sweetness. The 25 Most Extreme Asian Movies Ever. 20 Great Asian Movies You Probably Haven’t Seen. 16. 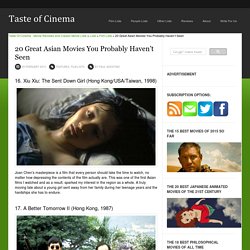 Xiu Xiu: The Sent Down Girl (Hong Kong/USA/Taiwan, 1998) Joan Chen’s masterpiece is a film that every person should take the time to watch, no matter how depressing the contents of the film actually are. This was one of the first Asian films I watched and as a result, sparked my interest in the region as a whole. A truly moving tale about a young girl sent away from her family during her teenage years and the hardships she has to endure. 20 Great Soul-Crushing Films That Are Worth Your Time. 14. 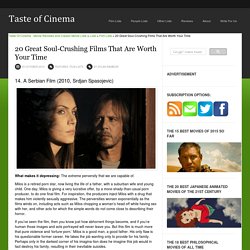 What makes it depressing: The pure decadence of humanity. The 20 Weirdest Movies Of The 21st Century. Since the turn of the century, Hollywood has given us fine pieces of movie-making art. 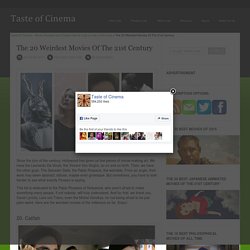 We have the Leonardo Da Vincis, the Vincent Van Goghs, so on and so forth. Then, we have the other guys. The Salvador Dalis, the Pablo Picassos, the weirdists. From an angle, their work may seem abstract, obtuse, maybe even grotesque. But sometimes, you have to look harder to see what exactly Picasso is saying. This list is dedicated to the Pablo Picassos of Hollywood, who aren’t afraid to make something many people, if not nobody, will truly understand. 20.

The movie: A documentary about a photographer (Nev Schulman) setting out to find the girl he met on Facebook (Meg Faccio) with upsetting results (Meg Faccio is actually Angela Basset). What’s weird: Not necessarily “Weird”, but a very unsettling look at the world of internet lies. 25 Great Psychological Thrillers That Are Worth Your Time. Described as a story which emphasizes the psychology of its characters and their unstable emotional states, the following films are benchmarks for what a successful psychological thriller should aspire to be. 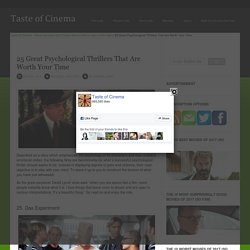 Instead of displaying legions of gore and violence, their main objective is to play with your mind. To leave it up to you to construct the tension of what you have just witnessed. As the great perplexer David Lynch once said: “when you are spoon-fed a film, more people instantly know what it is. I love things that leave room to dream and are open to various interpretations. It’s a beautiful thing.” 25. Das Experiment is a 2001 German thriller from director Oliver Hirschbiegel, starring Moritz Bleibtreu as Tarek Fahd, or later only to be known as Prisoner 77.