Log In. IHS: new Bundesliga TV deal a game changer for Germany. The new deal to televise the Bundesliga German national football league whereby no single operator will hold exclusive rights will bring the country into line with other major markets says research from IHS. 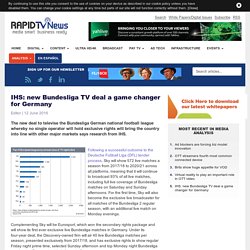 Sky, Eurosport nets Bundesliga rights until 2021. Just as it has done with the English Premier League, pay-TV giant Sky has swooped to win the lion’s share of rights to show the German Bundesliga until 2021. 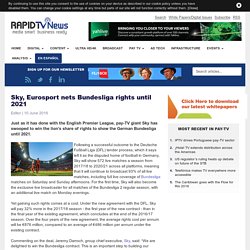 Following a successful outcome to the Deutsche Fußball Liga (DFL) tender process, which it says left it as the disputed home of football in Germany, Sky will show 572 live matches a season from 2017/18 to 2020/21 across all platforms, meaning that it will continue to broadcast 93% of all live matches, including full live coverage of Bundesliga matches on Saturday and Sunday afternoons. For the first time, Sky will also become the exclusive live broadcaster for all matches of the Bundesliga 2 regular season, with an additional live match on Monday evenings. Yet gaining such rights comes at a cost. Log In. MIPTV report Fiction, formats, fronts & VR lead trending topics MIPBlog. SNL: Q&A: Virtual reality experiences 'addicting,' may change some viewing patterns, exec says.

Virtual reality streaming company NextVR has delivered live content from the NBA, NASCAR, the PGA and several other event organizers. 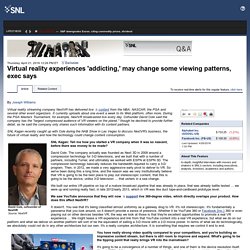 Reality TV Power List: The 10 A-Listers of 2016. One year after a megamerger minted Endemol Shine North America among the biggest sellers in all of unscripted, its recently re-upped co-CEOs Abrego and Corwin, both 43, have amassed one of the largest portfolios of both series and acquired production companies. 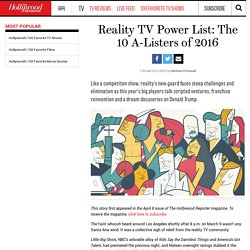 SNL: Disney and Nokia strike partnership as VR moves closer to mainstream. Walt Disney Co. and Nokia Technologies are putting down another milestone on virtual reality's journey from novelty to market reality. 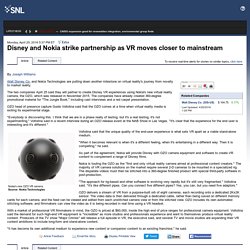 The two companies April 25 said they will partner to create Disney VR experiences using Nokia's new virtual reality camera, the OZO, which was released in November 2015. The companies have already created 360-degree promotional material for "The Jungle Book," including cast interviews and a red carpet presentation. Traditional media companies successfully innovate on snapchat. Older media brands are succeeding in attracting Snapchat’s millennial users to view their content, made specifically for the social network, says research from Future Scape. 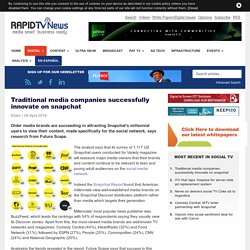 The analyst says that its survey of 1,117 US Snapchat users conducted for Variety magazine will reassure major media owners that their brands and content continue to be relevant to teen and young adult audiences on the social media network. Indeed the Snapchat Report found that American millennials view well-established media brands on the Snapchat Discover distribution platform rather than media which targets their generation. Millennials’ most popular news publisher was BuzzFeed, which leads the rankings with 54% of respondents saying they usually view its Discover stories. MIPTV. ‘The Birth of a Nation’s’ $17.5 Million Gamble by Fox Searchlight. Courtesy of Sundance Film Festival. 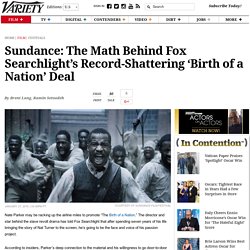 Hollywoodreporter. Snapchat live stories - Variety PMC. Snapchat’s political coverage is the most prominent component of its growing ambitions to provide its distinctly strange style of programming to an audience CNN would envy: At an investor conference earlier this month, CEO Evan Spiegel reportedly divulged that his platform was delivering 8 billion video views each day worldwide. 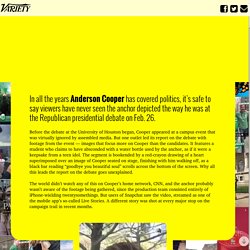 The number is all the more staggering considering it’s comparable to the last estimated video audience offered by Facebook, which has at least 10 times the 100 million-strong user base Snapchat boasts. The company also claims that 10 million-20 million users watch Live Stories daily, and 41% of Americans aged 18-34 access the app on a daily basis; only 6% of that demographic watch the average U.S. TV network by the same measure. New Study Shows Millennials Prefer Short Mobile Videos, While Older Crowds Like Long-form. A new study says millennials who view videos on their phones resonate more with brands that take a short-form approach to spots, while older audiences tend to agree more with the traditional 30-second length. 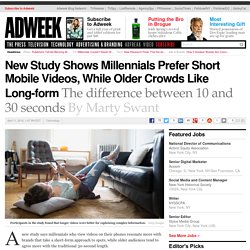 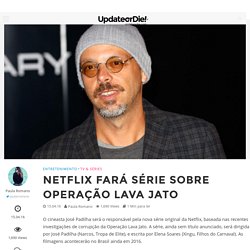 HBO, Discovery Invest in Holographic-Entertainment Company - TVUSA. LOS ANGELES: Home Box Office (HBO) and Discovery Communications have taken equity stakes in OTOY, with an eye toward the development and distribution of original holographic content. The investments will fuel the ability of HBO and Discovery to deliver new entertainment experiences to consumers across TV, mobile, web, social and emerging wearable technologies such as virtual and augmented reality. How Mark Zuckerberg Is Making His Weird Video Future Happen.

"In the future, you'll be able to snap your fingers and pull out a photo and make it as big as you want. " "A lot of things that we think about as physical objects today ... will actually just be $1 apps in an AR app store. " "In a decade, video will look like as big of a shift in the way we all share and communicate as mobile has been. "