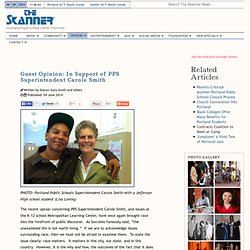 As Socrates famously said, “the unexamined life is not worth living.” There is a reason why Oregon State Statute requires culturally competent healthcare. Race matters, therefore culture matters, and race and culture impact outcomes. Across the country and in Portland, children of color are disciplined, suspended and expelled at significantly higher rates than their white counterparts for similar behaviors. My View: Don't let PPS inaction damage good schools. Parents fight back after school district refuses to halt parade of bad principals Portland Public Schools has a problem managing principals who harm students, schools and their communities. 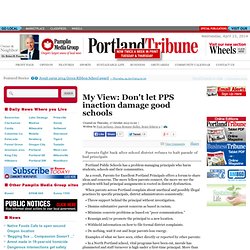 As a result, Parents for Excellent Portland Principals offers a forum to share ideas and concerns. The more fellow parents connect, the more we see the problem with bad principal assignments is rooted in district dysfunction. When parents across Portland complain about unethical and possibly illegal practices by specific principals, district administrators consistently: Parents seethe as system stumbles. PPS feels the heat from social media, Ainsworth families by: TRIBUNE FILE PHOTO: CHRISTOPHER ONSTOTT - Mary Krogh, former Portland Public Schools ombudsman, talked in 2011 with a district administrator about how to improve communication with parents. 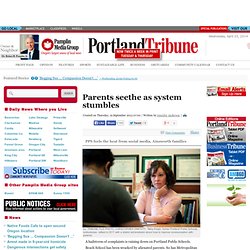 A hailstorm of complaints is raining down on Portland Public Schools. Beach School has been wracked by alienated parents. So has Metropolitan Learning Center, where, on the second day of school, unresolved concerns from last year led a group of parents to hang a banner on the staff parking lot fence. They say the banner — which read “MLC parents support MLC teachers — was a show of unity. Things also are ugly at Ainsworth Elementary, a generally quiet, popular, high-performing school in Southwest Portland. The parents say the system failed them. Www.ode.state.or.us/data/reportcard/AYPpdfs/13/13-AMO-916.pdf. Www.ode.state.or.us/data/reportcard/RCpdfs/13/13-ReportCard-916.pdf. Www.ode.state.or.us/data/reportcard/RCpdfs/13/13-DetailSheet-916.pdf. AMO/AYP and Report Card Download. MLCScores. Site-Based Decisionmaking: State Level Policies. Site-Based Decisionmaking: State-level Policies By Jennifer Dounay April 2005 Site-based management, which is intended to devolve decisionmaking to a team at the school-building level, first gained state policymakers’ interest in the late 1980s as part of a broader movement towards deregulation of school governance. 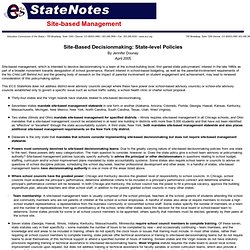 Recent interest in school-based budgeting, as well as the parental-involvement requirements of the No Child Left Behind Act and the growing body of research on the impact of parental involvement on student engagement and achievement, may lead to renewed consideration of this policymaking option. PPS School Board Meeting 8-19-2013 - Public Comment - Rees Bushan. Portland Schools Considering Transfer Policy Changes. Where kids in Portland attend school is based mainly on two things: where they live, and how easy it is to transfer elsewhere. 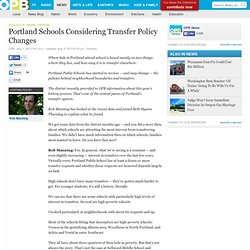 Portland Public Schools has started to review — and may change — the policies behind neighborhood boundaries and transfers. The district recently provided to OPB information about this year’s lottery process. That’s one of the central pieces of Portland’s transfer system. Rob Manning has looked at the recent data and joined Beth Hyams Thursday to explain what he found. We got some data from the district months ago — and you did a story then, about which schools are attracting the most interest from transferring families. Rob Manning: Yes. High schools don’t have many transfers — they’ve gotten much harder to get. Northwest Portland: Metropolitan Learning Center first, second grade class raise $1,100 for schools in Pakistan, Afghanistan. View full sizePhoto Courtesy of John WalrodJohn Walrod's class of first and second grade students show the signs they made for their collection for Pennies for Peace. The class donated $1,400 to the nonprofit organization that builds schools and provides school supplies to students in Afghanistan and Pakistan.

As a teacher to first and second grade students at Northwest Portland’s Metropolitan Learning Center, John Walrod had his doubts about reading to his students the adult version of "Three Cups of Tea," a nonfiction book with heavy topics. From the moment a relative of one of his students suggested he bypass the youth adaptation and read them the more-mature version, Walrod said he felt apprehensive. "I was pretty nervous about it," he said. "All along, I would just kind of stop and say, 'who can summarize what I just read there,' to make sure they were understanding. " But his 26 students did understand, and what they did as a result shocked Walrod. -- Molly Hottle. School leadership stumbles over race. MLC Support Station. School leadership stumbles over race. 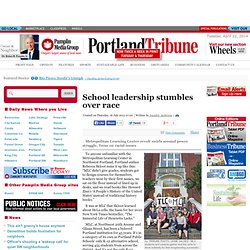 The school is known for its welcoming environment. One of their goals is to attract more families of color. To anyone unfamiliar with the Metropolitan Learning Center in Northwest Portland, Portland author Rebecca Skloot sums it up like this: “MLC didn’t give grades, students got to design courses for themselves, teachers went by their first names, we sat on the floor instead of lined up in desks, and we read books like Howard Zinn’s ‘A People’s History of the United States’ instead of traditional history books.” It was at MLC that Skloot learned about HeLa cells, the basis for her 2010 New York Times bestseller, “The Immortal Life of Henrietta Lacks.” 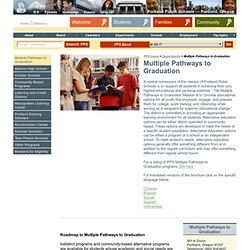 The Multiple Pathways to Graduation Mission is to “provide educational options for all youth that empower, engage, and prepare them for college, work training, and citizenship while serving as a vanguard for systemic educational change.” The district is committed to providing an appropriate learning environment for all students. Alternative education options can be either district operated or community based. These options are developed to meet the needs of a specific student population. Definitions - Enrollment & Transfer. Focus/Immersion Programs - Enrollment & Transfer. Who We Are - Metropolitan Learning Center. We are a diverse community of learners - students, staff, volunteers and families - who have come together to celebrate life, learning and the pursuit of productive, meaningful, mutually supportive and satisfying lives. 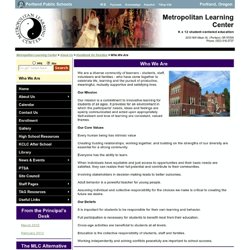 Our Mission Our mission is a commitment to innovative learning for students of all ages. It provides for an environment in which the participants' needs, ideas and feelings are openly communicated and acted upon appropriately. Home. Assessment Test Results 2011. Every spring, students in grades 3-8 and grade 10 participate in an annual assessment based on state or district reading and math goals for that grade. 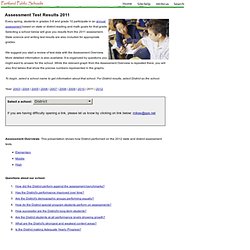 Selecting a school below will give you results from the 2011 assessment. State science and writing test results are also included for appropriate grades. We suggest you start a review of test data with the Assessment Overview. More detailed information is also available. It is organized by questions you might want to answer for the school. To begin, select a school name to get information about that school. Year: 2003 | 2004 | 2005 | 2006 | 2007 | 2008 | 2009 | 2010 | 2011 | 2012. Assessment Test Results . AMO/AYP and Report Card Download. School and District Report Cards The Oregon Department of Education produces yearly report cards for schools and districts. 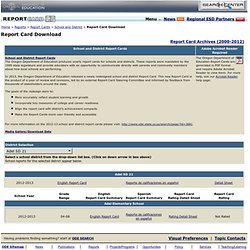 These reports were mandated by the 1999 state legislature and provide educators with an opportunity to communicate directly with parents and community members about how local schools are performing. In 2013, the Oregon Department of Education released a newly redesigned school and district Report Card. This new Report Card is the product of a year of review and revisions, led by an external Report Card Steering Committee and informed by feedback from thousands of stakeholders around the state.

The goals of the redesign were to: