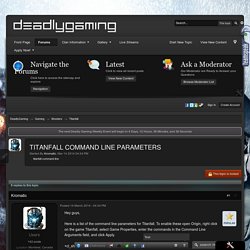 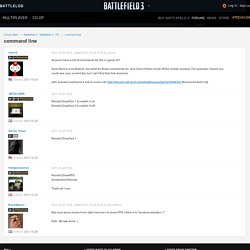 Sure there's a list feature, but what do those commands do, and most of them scroll off the screen anyway. For example I heard you could see your current fps but I can't find that link anymore. edit: actually just found a link to some info [forums.bit-tech.net] Enlisted: 2011-10-28 Render.DrawFps 1 to switch it onRender.DrawFps 0 to switch it off. RockWhore. 3D Settlers of Catan Board. This is my first project on instructables. 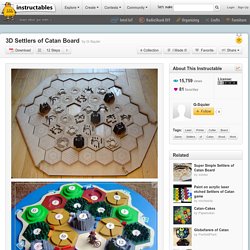 Hopefully some people will like it :). I based this on another project I found here on instructables. I drew these plans in inkscape so that they are now available for a laser printer. What you need: - Laser Printer - 4mm thick MDF board (I used six boards of 60cm by 30cm as this was the biggest dimension the laser printer could handle). Custom 3D Settlers of Catan board from scrap plywood. The Official Settlers of Catan Gaming Board by Bill Trammel. IMPORTANT NOTE: To pledge for multiple products, add up the dollar amount of the rewards you'd like to receive and set your pledge value to that total. 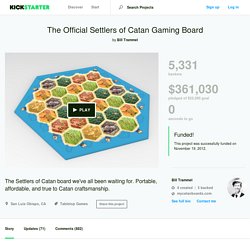 A survey sent out following the end of the Kickstarter period will confirm each product you will receive, as well as engraving info. Increasing your pledge level will not affect the delivery dates or cause you to lose early bird special rates. Because of the differences in production timelines, however, you may receive some pledges before others. Catan 'Puzzel' Board by diw08. Catan 'Puzzel' Board by diw08. Custom Border Frame with Ports.

Unlike the original, paper-stock borders, our 3/16th-inch masonite borders will not be ruined by way of spilled soda-pops, trips to the beach, soiled kids' fingers, and the like. 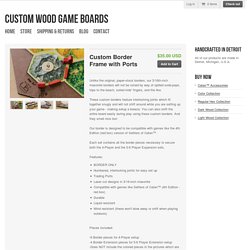 These custom borders feature interlocking joints which fit together snugly and will not shift around while you are setting up your game - making setup a breeze. You can also shift the entire board easily during play using these custom borders. And they smell nice too! Our border is designed to be compatible with games like the 4th Edition (red box) version of Settlers of Catan™. Each set contains all the border pieces necessary to secure both the 4-Player and the 5-6 Player Expansion sets. Features: Top 10 Must-Have Board and Card Games. How to determine the edition of The Settlers of Catan? - Board & Card Games Stack Exchange. There are differences in cover art and publisher. 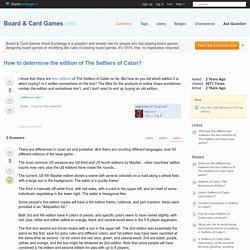 And there are counting different languages, over 50 different editions of the base game... The most common US versions are US third and US fourth editions by Mayfair... other countries' edition counts may vary, plus the US editions have made the rounds... The current, US 4th Mayfair edition shows a scene with several colonists on a road along a wheat field, with a large sun in the background. The water is a puzzle frame. The third is basically off-white front, with red sides, with a crest in the upper left, and an inset of some individuals negotiating in the lower right. Some people's 3rd edition copies will have a 4th edition frame, rulebook, and port markers; these were provided in an "Adaptation Kit. " Both 3rd and 4th edition have 4 colors of pieces, and specific colors seem to have varied slightly, with red, blue, white and either yellow or orange; black and neutral wood were in the 5-6 player expansion. 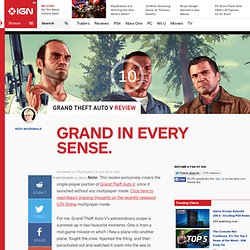 Click here to read Keza's ongoing thoughts on the recently released GTA Online multiplayer mode. For me, Grand Theft Auto V’s extraordinary scope is summed up in two favourite moments. One is from a mid-game mission in which I flew a plane into another plane, fought the crew, hijacked the thing, and then parachuted out and watched it crash into the sea to escape death at the hands of incoming military fighter jets. ‘Grand Theft Auto V’ review: Stubborn sexism, violence ruin game play. Sept. 20, 2013 | 4:01 p.m. 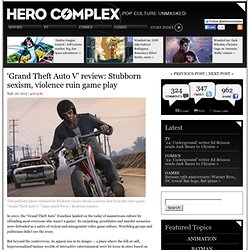 This publicity photo released by Rockstar Games shows a screen shot from the video game, “Grand Theft Auto V.” (Associated Press / Rockstar Games) In 2001, the “Grand Theft Auto” franchise landed on the radar of mainstream culture by offending most everyone who wasn’t a gamer. Its carjacking, prostitutes and murder scenarios were defended as a satire of violent and misogynistic video game culture.