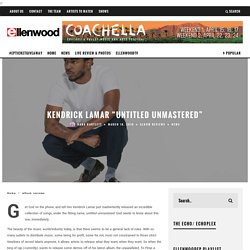 God needs to know about this one, immediately. The beauty of the music world/industry today, is that there seems to be a general lack of rules. With so many outlets to distribute music, some being for profit, some for not, most not constrained to those strict timelines of record labels anymore, it allows artists to release what they want, when they want. So when the king of rap (currently) wants to release some demos off of his latest album, the unparalleled, To Pimp a Butterfly, everyone gasps, accepts, raves, and then embraces the unmastered gems that this man can create.

Although this seemingly came out of nowhere, let’s also be reminded that Kendrick has been performing some of these songs on a very large scale before this release. The first track starts off with a bang, after the slow and sexual interlude, that is. CRSSD Festival Spring 2016. Last weekend saw the newly minted waterfront park in downtown San Diego host the CRSSD (Crossed San Diego) Festival for its third installment. 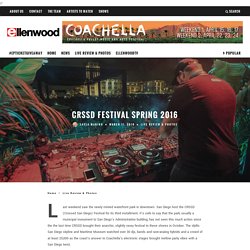 It’s safe to say that the park, usually a municipal monument to San Diego’s Administration building, has not seen this much action since the the last time CRSSD brought their anarchic, slightly ravey festival to these shores in October. The idyllic San Diego skyline and Maritime Museum watched over 30 djs, bands and rave-analog hybrids and a crowd of at least 25,000 as the coast’s answer to Coachella’s electronic stages brought mellow party vibes with a San Diego twist. Among the indie, trap, house and chill funk artists who graced CRSSD’s three stages, partygoers were most excited about Odesza, the live trap group du jour, Chet Faker and Poolside to name a few. Here are some reviews on the spotlight performances of the weekend: Lyric Theatre 3/9/16. Lewis Del Mar made their Los Angeles debut at the Lyric Theatre before a sold out crowd Wednesday night. 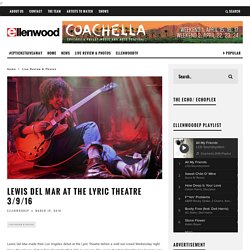 Since the release of their first EP simply titled ‘EP’ in January, The young duo from Brooklyn has become one of the most talked about emerging artists of the year. Their massive single ‘Loud(y)’ has reached commercial airplay amongst radio stations nationwide while establishing a dedicated fan base along the way. Strapped with an acoustic guitar and a microphone, Danny Miller delivered an unforgettable performance from start to finish. Accompanied by his childhood friend and band mate Max Harwood behind the drums, they performed a solid 45-minute set, debuting new material for their anticipated album release later this year. Miller’s interaction with the audience became a special engagement, jumping off stage into the crowd while everyone surrounded him for a closer look. 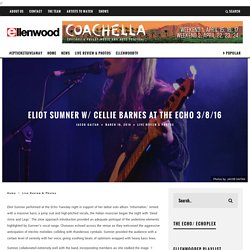 Armed with a massive bass, a jump suit and high-pitched vocals, the Italian musician began the night with ‘Dead Arms and Legs.’ The slow approach introduction provided an adequate portrayal of the undertone elements highlighted by Sumner’s vocal range. Choruses echoed across the venue as they welcomed the aggressive anticipation of electric melodies colliding with thunderous cymbals. Sumner provided the audience with a certain level of serenity with her voice, giving soothing beats of optimism wrapped with heavy bass lines. Sumner collaborated extremely well with the band, incorporating members as she stalked the stage.

Eliot Sumner at SXSW 3/16-3/19 » Ellenwood-EP. Travis Barker Presents MUSINK. Live Review and Photos by: TAMEA AGLE When you walk into the hangers at Musink, you are instantly greeted by constant buzzing of hundreds of tattoo machines. 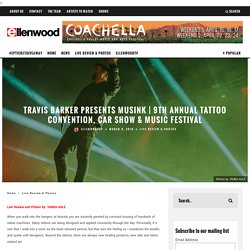 Many tattoos are being designed and applied constantly through the day. Personally, it’s rare that I walk into a room as the least tattooed person, but that was the feeling as I wandered the booths and spoke with designers. Beyond the tattoos, there are always new healing products, new inks and tattoo related art. Tattoo of the day competitions are the best way to end the night and the place to see photorealistic tattoos and large back pieces. Louise Burns - "Pharaoh" » Ellenwood-EP. Vancouver’s Louise Burns just released her new 7″ featuring the hauntingly beautiful single “Pharaoh.” 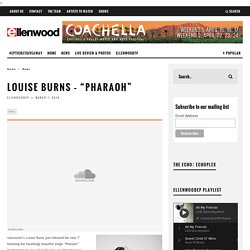 Edinburgh’s We Were Promised Jetpacks released their their third album Unravelling via FatCat Records to critical acclaim. 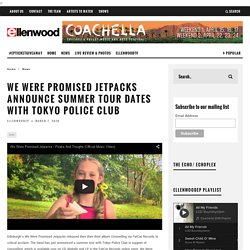 The band has just announced a summer tour with Tokyo Police Club in support of Unravelling, which is available now on CD, digitally and LP in the FatCat Records online store. We Were Promised Jetpacks will be selling a limited edition vinyl reissue of their long out-of-print debut album, These Four Walls at the upcoming shows. The upcoming tour will make stops in major cities including New York, Chicago, Seattle, San Francisco, Los Angeles, Austin and more. We Were Promised Jetpacks could write the book on how to be a rock band. Jungle Pussy. NYC-base Le1f performed in a very pack, funky and engaging crowd sunday night in support his debut LP Riot Boi that came out on Terrible/XL Recordings and available now for downloads. 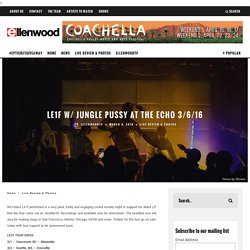 The headline tour will also be making stops in San Francisco, Atlanta, Chicago, SXSW and more. The El Rey Theatre 3/5/16. Arguably one of Britain’s most influential guitarists, Johnny Marr returned to Los Angeles over the weekend performing before a sold out audience at the El Rey. 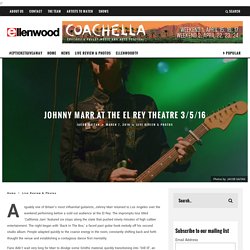 The impromptu tour titled ‘California Jam’ featured six stops along the state that pushed ninety minutes of high caliber entertainment. The night began with ‘Back In The Box,’ a faced past guitar hook melody off his second studio album. People adapted quickly to the coarse energy in the room, constantly shifting back and forth thought the venue and establishing a contagious dance first mentality. Fans didn’t wait very long for Marr to divulge some Smiths material, quickly transitioning into ‘Still Ill’, an appropriate description to the crowds dedicated response. Imagine Dragons in Concert: Smoke + Mirrors Live Review » Ellenwood-EP. After spending 2015 on the road in support of their Sophomore album Smoke + Mirrors, Imagine Dragons aim to please those selected few that missed their performance with a one night only intimate engagement in theatres March 2nd. 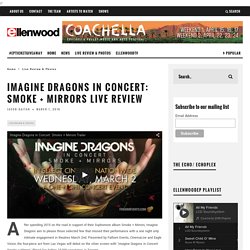 Presented by Fathom Events, CinemaLive and Eagle Vision, the four-piece act from Las Vegas will debut on the silver screen with ‘Imagine Dragons in Concert: Smoke + Mirrors’ filmed live before 15,000 spectators in Toronto. ‘Smoke + Mirrors’ live was captured on 4K and Dolby Atmos giving everyone the opportunity to enjoy the film with a 360-degree sound experience and crystal clear images. The film without question captures the raw essence of a their performance. Front man Dan Reynolds quickly acknowledged the special engagement by informing the audience of their cinematic intent. Contrary to other theatre release styles, Imagine Dragons focus specifically on the live event without any documentary transitions or backstage halts. Korn Announces Co-Headlining Tour. Rob Zombie and Korn have just announced a national co-headline tour, slated to kick off this summer. The metal favorites will stop in 26 cities across North America from Los Angeles to Boston.

I’d never really experienced jealousy of this kind, it was a horrible, consuming feeling that was essentially my own insecurity manifested. I wrote this, dealt with my issues and it was a totally cathartic experience, getting it all out and not being ashamed of how I felt. New Acoustic Album 'Midnight Machines' Electro-pop artist Lights unveiled Midnight Machines, an album comprised of six acoustic songs from her third studio album Little Machines (September 2014), plus two brand new songs, set for April 8 release via Warner Bros.

Records. Introducing: Wussy. Over the past decade, Wussy has conquered the independent music scene with arguably one of the most stellar bodies of work in recent memory. Basia Bulat w/ The Weather Station. Juno and Polaris prize nominated Canadian artist Basia Bulat played at the Bootleg Theater tuesday night in support of her new album Good Advice which is getting a rave reviews about it’s lush pop and catchy chorus. Basia recently appeared on World Cafe to discuss the new album and play a few tracks. Canadian folk music band The Weather Station fronted by Tamara Lindeman opened and sang backup for Basia Bulat also in support of her album Loyalty and now available on itunes. Parquet Courts, Chris Cohen, Emotional, The World. With performances by Antwon, Alexander Spit, and Unlikely Heroes.

For the synthesis of Bury Me at Makeout Creek, however, she opted for a DIY approach and drifted away from the recording studios and professional musicianship of her academic background. Since the release, Mitski has been on the road in support of the album with breaks along the way to finalize her fourth album. Mitski was tapped to perform at Noise Pop Music Festival, a weeklong event featuring indie musicians, artists and films throughout multiple venues in San Francisco.