Library of common compounds. Writing Compound Formulas Review. What are the rules in naming compounds. A complete answer to this question would fill a bookshelf. In fact, it takes a shelf full of publications by an international organization called the IUPAC. Any quick subset of the rules is bound to suffer from oversimplifications, omissions, and probably some outright inaccuracies. But let's give it a shot anyway! First consider the basic -suffixes: We will consider three types; ionic compounds without and with transition elements, and covalent compounds. The transition elements are found in the B families of the periodic table. Another suffix is -ol, referring to any type of alcohol - methanol, ethanol, derived from methane (CH4) and ethane (C2H6) - methanol is CH3OH while ethanol is C2H5OH.

Moving into biochemistry: The suffices -in and -one refer to Hormones - eg insulin and testosterone. Table Of Common Substances And Their Formulas. Tested for fastness to light by exposing to direct sunlight for a day or two, saving a portion of the cloth as before for comparison. 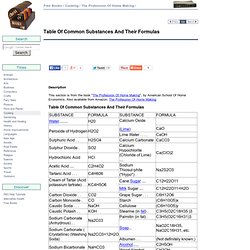 If the dye will stand direct sunlight without appreciable change for this length of time, it will not give much trouble by fading. Wall paper may be tested for fading in a similar way. The industrial chemist always endeavors to test materials in a manner as nearly like the way they are to be used as possible. For example, if he were testing two samples of flour to be used for making bread, he might make up two small loaves, using carefully weighed quantities of each sample of flour and other materials and baking the loaves at one time, compare the result.

In such cases it is usual to have a "standard" flour or other material to use for comparison. This method of testing by comparison could often be used by housekeepers provided reasonable care were taken as to weights and conditions. Testing by Comparison Oxalic acid should be labeled Poison. 1st. 2nd. 3rd. Empirical Formula of a Compound. Empirical Formula of a Lead Compound Purpose: To determine the empirical formula of lead iodide. 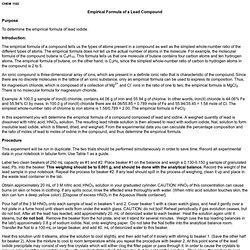 Introduction: The empirical formula of a compound tells us the types of atoms present in a compound as well as the simplest whole-number ratio of the different types of atoms. The empirical formula does not tell us the actual number of atoms in the molecule. An ionic compound is three-dimensional array of ions, which are present in a definite ionic ratio that is characteristic of the compound. Example: A 100.0 g sample of iron(II) chloride, contains 44.06 g of iron and 55.94 g of chlorine. In this experiment you will determine the empirical formula of a compound composed of lead and iodine. Procedure This experiment will be run in duplicate. Label two clean beakers of 250 mL capacity as #1 and #2.

Obtain approximately 20 mL of 3 M nitric acid, HNO3, solution in your graduated cylinder. Pour half of the 3 M HNO3 onto each sample of lead in beakers 1 and 2. Results: Table 1. Table 2. Conclusion. List of inorganic compounds. Although most compounds are referred to by their IUPAC systematic names (following IUPAC nomenclature), "traditional" names have also been kept where they are in wide use or of significant historical interests. 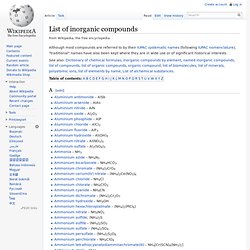