Offences in other nations

Spying on Citizens without a warrant. General Brutality. Breaking Up Peaceful Protests/Use of Police as Enforcers. GITMO/Black Sites. 59-6-2. The disappeared: Chicago police detain Americans at abuse-laden 'black site'. The Chicago police department operates an off-the-books interrogation compound, rendering Americans unable to be found by family or attorneys while locked inside what lawyers say is the domestic equivalent of a CIA black site. 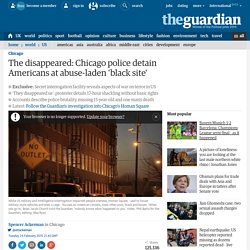 The facility, a nondescript warehouse on Chicago’s west side known as Homan Square, has long been the scene of secretive work by special police units. Interviews with local attorneys and one protester who spent the better part of a day shackled in Homan Square describe operations that deny access to basic constitutional rights. Alleged police practices at Homan Square, according to those familiar with the facility who spoke out to the Guardian after its investigation into Chicago police abuse, include: At least one man was found unresponsive in a Homan Square “interview room” and later pronounced dead.

Brian Jacob Church, a protester known as one of the “Nato Three”, was held and questioned at Homan Square in 2012 following a police raid. FBI admits flaws in hair analysis over decades. The Justice Department and FBI have formally acknowledged that nearly every examiner in an elite FBI forensic unit gave flawed testimony in almost all trials in which they offered evidence against criminal defendants over more than a two-decade period before 2000. 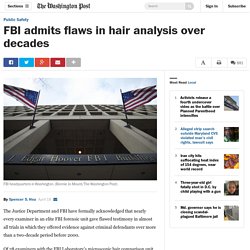 Of 28 examiners with the FBI Laboratory’s microscopic hair comparison unit, 26 overstated forensic matches in ways that favored prosecutors in more than 95 percent of the 268 trials reviewed so far, according to the National Association of Criminal Defense Lawyers (NACDL) and the Innocence Project, which are assisting the government with the country’s largest post-conviction review of questioned forensic evidence.

The cases include those of 32 defendants sentenced to death. FBI Admits Flawed Forensics May Have Led To Wrongful Convictions  Fed-up cops post pictures of vagrants online. NYPD cops fed up with vagrants making life miserable in the city are taking matters into their own hands — by snapping photos of quality-of-life scofflaws and posting them online. 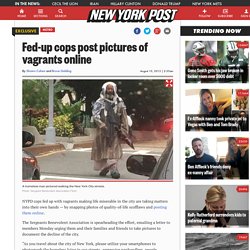 The Sergeants Benevolent Association is spearheading the effort, emailing a letter to members Monday urging them and their families and friends to take pictures to document the decline of the city. “As you travel about the city of New York, please utilize your smartphones to photograph the homeless lying in our streets, aggressive panhandlers, people urinating in public or engaging in open-air drug activity, and quality-of-life offenses of every type,” says the letter from SBA President Ed Mullins, a major critic of Mayor Bill de Blasio.

The union then “will notify our public officials in writing of what is being observed,” he said. Modal Trigger “We will refer issues to the proper agencies, and we will help create accountability across the board.” “We, the ‘Good Guys,’ are sworn to protect our citizens. Bernie Sanders on Crime, Punishment, and Poverty (10/22/1991) Judge Backs Charges Against Cleveland Officers in Killing of Tamir Rice. Acting under a rarely used provision of Ohio state law, a judge found probable cause Thursday to charge Cleveland police Officer Timothy Loehmann with murder in the fatal shooting of 12-year-old Tamir Rice last year. 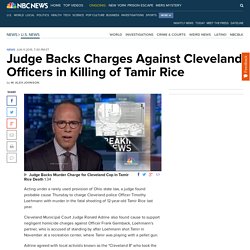 Cleveland Municipal Court Judge Ronald Adrine also found cause to support negligent homicide charges against Officer Frank Garmback, Loehmann's partner, who is accused of standing by after Loehmann shot Tamir in November at a recreation center, where Tamir was playing with a pellet gun. Adrine agreed with local activists known as the "Cleveland 8" who took the unusual step of independently seeking charges because, they said, they'd lost confidence in the grand jury investigation. The ruling is only advisory and doesn't affect the separate grand jury investigation. The NYPD Is an Embarrassment to the City of New York. After Christopher Dorner’s rampage, how to build community trust in police. Given its history of scandal, the LAPD has spent a decade building a kinder, gentler organization and making significant strides in community-based policing. 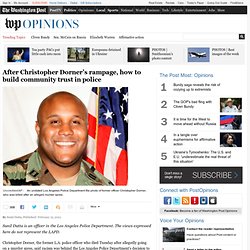 Even past detractors, including civil rights lawyer Connie Rice, admit that the LAPD has changed since the early 1990s. But people still associate the department with events of 20 years ago: the acquittal of officers accused of beating Rodney King, the subsequent L.A. riots and the resignation of Chief Daryl Gates. The department’s problems aren’t all in the past, either: In November, a jury awarded former officer Pedro Torres $2.8 million after finding that officials retaliated when he verified claims about an allegedly racist supervisor.

During the past decade, 17 officers have won million-dollar-plus verdicts in lawsuits claiming harassment, discrimination and retaliation. Indeed, some people even sympathize with Dorner, despite his unconscionable acts. This is the face of the war on drugs. : Bad_Cop_No_Donut.