Republican Party Favorability Sinks to Record Low. This article is part of an ongoing series analyzing how the government shutdown and the debate over raising the debt ceiling are affecting Americans' views of government, government leaders, political parties, the economy, and the country in general. 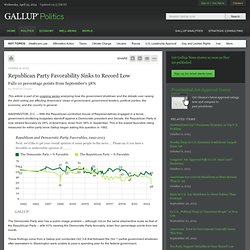 WASHINGTON, D.C. -- With the Republican-controlled House of Representatives engaged in a tense, government-shuttering budgetary standoff against a Democratic president and Senate, the Republican Party is now viewed favorably by 28% of Americans, down from 38% in September. This is the lowest favorable rating measured for either party since Gallup began asking this question in 1992. Oh good, there's a Salmonella outbreak while the government's shut down. No, I wouldn't say that. 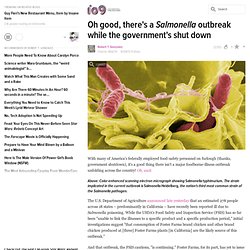 I'd say this is exactly the kind of situation that proves how unessential those in charge of governing are. You can't blame the furloughed workers for not being around to do their jobs. We should hold those ultimately responsible for them not being able to work as the parties responsible for this potentially monumental fuck up. People are currently and will continue to get sick.

Why? Government shutdown: Senate passes debt deal, sends it to House. President Barack Obama is thanking Democratic and Republican leaders in the Senate for passing a deal to end the partial government shutdown and avert a default. 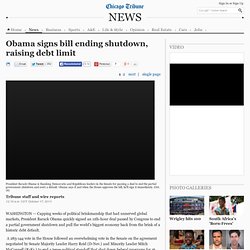 Obama says if and when the House approves the bill, he'll sign it immediately. (Oct. 16) WASHINGTON -- Capping weeks of political brinkmanship that had unnerved global markets, President Barack Obama quickly signed an 11th-hour deal passed by Congress to end a partial government shutdown and pull the world's biggest economy back from the brink of a historic debt default. A 285-144 vote in the House followed an overwhelming vote in the Senate on the agreement negotiated by Senate Majority Leader Harry Reid (D-Nev.) and Minority Leader Mitch McConnell (R-Ky.) to end a tense political standoff that shut down federal programs for 16 days and led to the furlough of hundreds of thousands of federal workers. The Democratic-led Senate passed the measure on a 81-18 vote and Obama signed the bill into law about 11:30 CST. A Federal Budget Crisis Months in the Planning. Michael Stravato for The New York Times "You are here because now is the single best time we have to defund Obamacare. 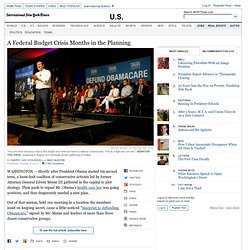 This is a fight we can win. " SENATOR TED CRUZ, speaking in August to a Heritage Action gathering in Dallas Out of that session, held one morning in a location the members insist on keeping secret, came a little-noticed “blueprint to defunding Obamacare,” signed by Mr. Meese and leaders of more than three dozen conservative groups. It articulated a take-no-prisoners legislative strategy that had long percolated in conservative circles: that Republicans could derail the health care overhaul if conservative lawmakers were willing to push fellow Republicans — including their cautious leaders — into cutting off financing for the entire federal government.

Rest Of The World Thinks Congress Is A ‘Laughing Stock' For Government Shutdown. John BoehnerSpeaker of the House Rep. 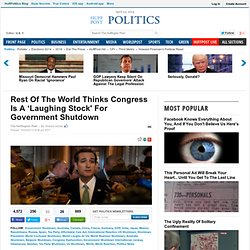 Harry Reid, D-Nev., walks to his office after arriving on Capitol Hill on Wednesday, Oct. 16, 2013 in Washington. ‘I won’t pay a ransom,’ says Obama. Some North Carolina lawmakers defer pay, Renee Ellmers refuses. Opinion: Shutdown a huge waste and cost to science. The Statue of Liberty looms over visitors below on Liberty Island in New York Harbor on Sunday, October 13. 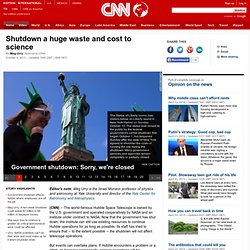 The statue was closed to the public by the federal government's partial shutdown that began October 1, but reopened Sunday after the state of New York agreed to shoulder the costs of running the site during the shutdown. Many government services and agencies remain completely or partially closed. The main entrance to Grand Canyon National Park remains closed to visitors in Grand Canyon, Arizona, on Thursday, October 10. Under pressure from several governors, the Obama administration said Thursday it will allow some shuttered national parks to reopen, as long as states use their own money to pay for park operations. 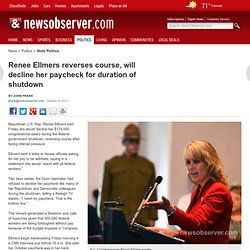 Rep. Renee Ellmers said Friday she would decline her $174,000 congressional salary during the federal government shutdown, reversing course after facing intense pressure. Ellmers sent a letter to House officials asking for her pay to be withheld, saying in a statement she would “stand with all federal workers.” Two days earlier, the Dunn lawmaker had refused to decline her paycheck like many of her Republican and Democratic colleagues during the shutdown, telling a Raleigh TV station, “I need my paycheck. That is the bottom line.”