Priorities, Disorganization, and a Talent for Self-Deception

Crime and Outrage. TIL Concerned about the number of cobras in Delhi, British colonial officials created a bounty, only to discover secret cobra farms created to collect the bounty. When the officials shut down the program the farms released their snakes, meaning they had f. Lachesism: Longing for the Clarity of Disaster. Political Philosophy. Neurological Ticks. Media Empires. 5 Popular Beliefs That Are Holding Humanity Back. Humans believe in a lot of stupid shit, and we do something stupid as a result of those beliefs about, oh, once every five seconds.

And sure, most of you reading this are educated types who don't believe in Bigfoot or psychic readings, but there are a whole bunch of equally stupid/harmful superstitions out there that are so commonly held that we don't even think of them as such. Very few of us don't fall victim to at least a few of them. In fact, I'm something of an expert on this because I believe literally hundreds of idiotic things, and also because I wrote a ridiculous best-seller about an apocalypse brought about by people believing in apocalypses.

And I say that, in order to keep humanity from imploding, we have to give up believing ... #5. Jupiterimages/Photos.com/Getty Images Every decision they make, and every vote they cast, is done with this in mind. And this affects your life. At this point my young atheist readers are saying, "Exactly! And I think it's bullshit. #4. . #3. 8 Horrifying Things We Do When No One's Looking. When the founders of OkCupid started one of the most popular dating sites on the Internet, they didn't intend to find out all of humanity's deep, dark secrets. 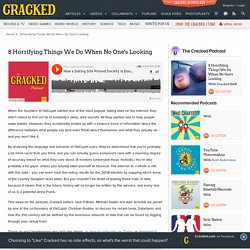 All they wanted was to help people make babies. However, they accidentally ended up with a treasure trove of information about the difference between what people say (and even think) about themselves and what they actually do -- and you won't like it. By analyzing the language and behavior of OkCupid users, they've determined that you're probably a lot more racist than you think, and you can actually guess someone's race with a stunning degree of accuracy based on what they care about. (It involves lumberjack music festivals.) You're also probably a lot gayer, unless you actually label yourself as bisexual. 7 Reasons the World Looks Worse Than It Really Is. A billion people have been lifted out of poverty in just the last 20 years. 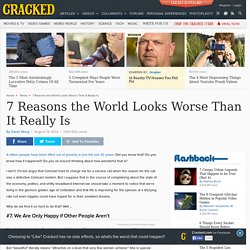 Did you know that? Do you know how it happened? Do you sit around thinking about how wonderful that is? I don't. I'm too angry that Comcast tried to charge me for a service call when the reason for the call was a defective Comcast modem. Why do we find it so hard to do that? #7. Thinkstock/Comstock/Getty Images Wow, that's a glum headline. Via YouTube. One statistic that tells you more about the world than a million could. Facebook completed its $22bn acquisition of WhatsApp this week - prompting this observation from former foreign secretary David Miliband. 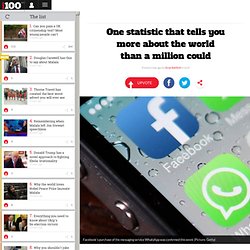 Facebook raised $19b to buy Whatsapp,more than the total spend around the world on the humanitarian effort in 1 year: David Miliband (@DMiliband) October 8, 2014 The elder Miliband is now the CEO of the International Rescue Committee which “responds to the world’s worst humanitarian crises and helps people to survive and rebuild”. His figure of $19bn has swelled to $22bn (£13.6bn) due to Facebook’s rising share price. While improved mobile communications and interconnectivity is beneficial to everyone in the world, the fact that one company in Silicon Valley can buy another company in Silicon Valley for more money than is spent to combat some of the planet’s gravest crises is a sobering thought.

Last Week Tonight with John Oliver: Stadiums (HBO) 5 Destructive Sides Of Celebrity Culture No One Talks About. Fame, in and of itself, is not a bad thing. 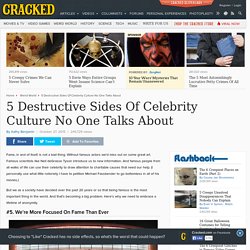 Without famous actors we'd miss out on some great art. Famous scientists like Neil deGrasse Tyson introduce us to new information. And famous people from all walks of life can use their celebrity to draw attention to charitable causes that need our help. (I personally use what little notoriety I have to petition Michael Fassbender to go bottomless in all of his movies.) But we as a society have decided over the past 20 years or so that being famous is the most important thing in the world. . #5. Vladimir Mitsner/iStock/Getty Images We've told you before that a ridiculous 51 percent of 18- to 25-year-olds think they will be famous one day. Nbc.comThe Voice, on the other hand, is about real talent, which is why I can't name a single winner. The problem is that being famous is replacing traditional goals. And those dreams of being the first actor-turned-director-turned-astronaut will still be there for most of you.