The NSA Will Finally Kill Its Metadata Snooping Program This Weekend. It’s official—NSA did keep its e-mail metadata program after it “ended” in 2011. Though it was revealed by Edward Snowden in June 2013, the National Security Agency's (NSA) infamous secret program to domestically collect Americans’ e-mail metadata in bulk technically ended in December 2011. 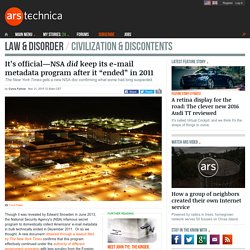 By 285 votes to 281, MEPs decide to call on EU member states to "drop any criminal charges against Edward Snowden" : worldnews. The U.S. Economy Is A Casualty Of NSA Surveillance Programs. Obama can’t point to a single time the NSA call records program prevented a terrorist attack. President Obama speaks during an end-of-the year news conference in the Brady Press Briefing Room at the White House in Washington, Friday, Dec. 20, 2013. 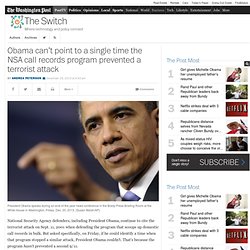 (Susan Walsh/AP) National Security Agency defenders, including President Obama, continue to cite the terrorist attack on Sept. 11, 2001 when defending the program that scoops up domestic call records in bulk. But asked specifically, on Friday, if he could identify a time when that program stopped a similar attack, President Obama couldn't. Privacy & Identity. After Senate vote, NSA prepares to shut down phone tracking program. Hours after the Senate balked at reauthorizing the bulk collection of U.S. telephone records, the National Security Agency began shutting down a controversial program Saturday that senior intelligence and law enforcement officials say is vital to track terrorists in the United States. 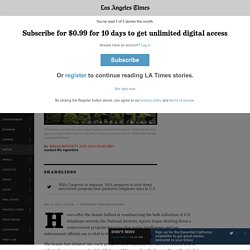 The Senate had debated into early predawn hours Saturday but failed to reach a deal to reform the program or extend its life beyond May 31, when the law used to authorize it is set to expire. Lawmakers then left on a weeklong recess, vowing to return at the end of it to try again in a rare Sunday session. Administration officials said later that they had to start the lengthy procedure of winding down the counter-terrorism program in anticipation of Congress failing to act. “That process has begun,” an administration official said Saturday. The data include the number dialed, duration, date and time for most telephone calls made by Americans. Opponents of the program, including presidential candidate Sen. NSA phone surveillance revealed by Edward Snowden ruled illegal.

The US court of appeals has ruled that the bulk collection of telephone metadata is unlawful, in a landmark decision that clears the way for a full legal challenge against the National Security Agency. 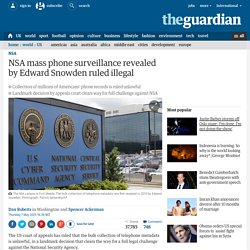 A panel of three federal judges for the second circuit overturned an earlier ruling that the controversial surveillance practice first revealed to the US public by NSA whistleblower Edward Snowden in 2013 could not be subject to judicial review. But the judges also waded into the charged and ongoing debate over the reauthorization of a key Patriot Act provision currently before US legislators. Comms giant pushes anti-spy network.

Brazil looks to break from US-centric Internet (Update 2) Brazil plans to divorce itself from the U.S. 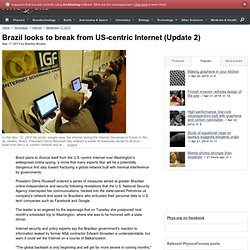 -centric Internet over Washington's widespread online spying, a move that many experts fear will be a potentially dangerous first step toward fracturing a global network built with minimal interference by governments. President Dilma Rousseff ordered a series of measures aimed at greater Brazilian online independence and security following revelations that the U.S. National Security Agency intercepted her communications, hacked into the state-owned Petrobras oil company's network and spied on Brazilians who entrusted their personal data to U.S. tech companies such as Facebook and Google. The leader is so angered by the espionage that on Tuesday she postponed next month's scheduled trip to Washington, where she was to be honored with a state dinner. While Brazil isn't proposing to bar its citizens from U.S. Rousseff says she intends to push for international rules on privacy and security in hardware and software during the U.N.

Brazilian president Rousseff: US surveillance a 'breach of international law' Brazil's president, Dilma Rousseff, has launched a blistering attack on US espionage at the UN general assembly, accusing the NSA of violating international law by its indiscriminate collection of personal information of Brazilian citizens and economic espionage targeted on the country's strategic industries. 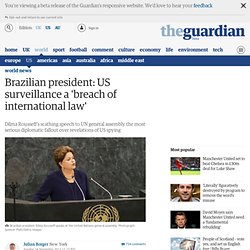 Yahoo CEO Mayer: we faced jail if we revealed NSA surveillance secrets. Mark Zuckerberg of Facebook and Marissa Mayer, the CEO of Yahoo, struck back on Wednesday at critics who have charged tech companies with doing too little to fight off NSA surveillance. 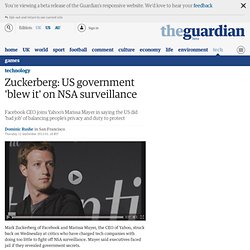 Mayer said executives faced jail if they revealed government secrets. Yahoo and Facebook, along with other tech firms, are pushing for the right to be allowed to publish the number of requests they receive from the spy agency. Companies are forbidden by law to disclose how much data they provide. Microsoft and Google to sue government over transparency. In a blog entry by Microsoft General Counsel & Executive Vice President, Legal & Corporate Affairs Brad Smith, the company explained how negotiations with the government over permission "…to publish sufficient data relating to Foreign Intelligence Surveillance Act (FISA) orders" have faltered. 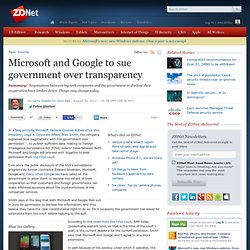 Both Microsoft and Google will proceed with litigation to seek permission from the FISA court. How the feds asked Microsoft to backdoor BitLocker, their full-disk encryption tool. PRISM (surveillance program) How Defenders Of NSA Dragnet Surveillance Are Stretching A 1979 Ruling To Pretend It's Constitutional. 2013 mass surveillance scandal. Edward Snowden's E-Mail Provider Defied FBI Demands to Turn Over Crypto Keys, Documents Show. Image: Courtesy of the Guardian The U.S. government in July obtained a search warrant demanding that Edward Snowden’s e-mail provider, Lavabit, turn over the private SSL keys that protected all web traffic to the site, according to to newly unsealed documents. 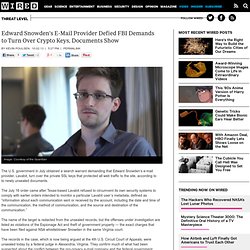 The July 16 order came after Texas-based Lavabit refused to circumvent its own security systems to comply with earlier orders intended to monitor a particular Lavabit user’s metadata, defined as “information about each communication sent or received by the account, including the date and time of the communication, the method of communication, and the source and destination of the communication.” Snowden Nominated for Freedom of Thought Prize. BRUSSELS/MOSCOW, September 11 (RIA Novosti) – Members of the European Parliament are officially nominating fugitive US leaker Edward Snowden for a prize celebrating freedom of thought, a parliamentary representative said Wednesday. 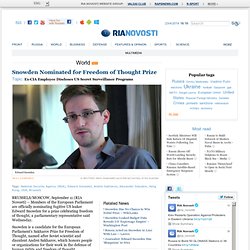 Snowden is a candidate for the European Parliament’s Sakharov Prize for Freedom of Thought, named after Soviet scientist and dissident Andrei Sakharov, which honors people or organizations for their work in the defense of human rights and freedom of thought. Christian Engstrom, a member of the Swedish Pirate Party who co-nominated Snowden for the award, wrote that Snowden is “paying a heavy personal price” for his “heroic” effort. “The US government hunts him as an outlaw… Governments that dare to offer him asylum are threatened with dire consequences by the US government,” Engstrom wrote on his personal blog page. “In a painful irony, his only sanctuary is Russia, a country with democratic problems and authoritarian tendencies.”

Edward Snowden asylum: US 'disappointed' by Russian decision. The White House expressed anger and dismay on Thursday after Russia granted temporary asylum to the American whistleblower Edward Snowden and allowed him to leave the Moscow airport where he had been holed up for over a month. White House spokesman Jay Carney said the US was "extremely disappointed" by the decision, almost certainly taken personally by President Vladimir Putin. He said Moscow should hand Snowden back and hinted that Barack Obama might now boycott a bilateral meeting with Putin in September, due to be held when the US president travels to Russia for a G20 summit. Carney added that Snowden had arrived in both China and Russia carrying with him thousands of top secret US documents. He said: "Simply the possession of that kind of highly sensitive classified information outside of secure areas is both a huge risk and a violation. "As we know he's been in Russia now for many weeks.

Putin made no immediate comment. That meeting is now under review. Edward Snowden. In 2013, Snowden was hired by an NSA contractor, Booz Allen Hamilton, after previous employment with Dell and the CIA.[4] On May 20, 2013, Snowden flew to Hong Kong after leaving his job at an NSA facility in Hawaii and in early June he revealed thousands of classified NSA documents to journalists Glenn Greenwald, Laura Poitras and Ewen MacAskill.

Snowden came to international attention after stories based on the material appeared in The Guardian and The Washington Post. Further disclosures were made by other newspapers including Der Spiegel and The New York Times. On June 21, 2013, the U.S. Department of Justice unsealed charges against Snowden of two counts of violating the Espionage Act of 1917 and theft of government property.[5] On June 23, he flew to Moscow, Russia, where he remained for over a month. Russian authorities granted him one-year asylum, which was later extended to three years. Background Childhood, family, and education Political views Career Employment at CIA. White House Tries to Prevent Judge From Ruling on Surveillance Efforts.